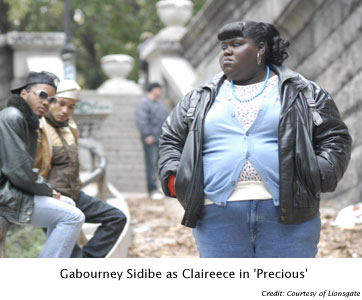 November has a lot of movies in store, but one of the prize winners is “Precious.” Some wonder whether the movie has to be so harsh, but Jennifer Merin says judge for yourself and witness a great performance by Mariah Carey, too.

(WOMENSENEWS)–Jumping the month’s movie release chronology, let’s get right to the long-awaited, much anticipated movie with that crazy name: "Precious: Based on the Novel ‘Push’ by Sapphire." It arrives on select screens Nov. 6.

The fictional character created by Sapphire (aka Ramona Loften) is 16-year-old Claireece "Precious" Jones, who’s been repeatedly raped and impregnated by her drug-addicted father and physically and emotionally abused by her welfare-scamming mother.

Precious (Gabourney Sidibe), an intelligent girl who does well in school, is obese from stuffing her face with fried chicken to fill an emotional void and to dull her pain. She survives the assaults, finds hope within her anguish and emerges as a strong and determined young woman who will most assuredly better her life.

Mo’Nique’s performance as Precious’ mother is stunning. She’s relentlessly demanding and cruel; never softening her character, never offering explanations or excuses for her heinous behavior, never attempting to squeeze a moment of sympathy from the audience, nor asking their forgiveness. With Daniels’ direction, she provokes you to understand what brought her to the tortured state of being in which she then tortures her loved ones.

A makeup-free Mariah Carey, cast as Precious’ social worker, emerges from the glitz and gimmickry of her previous cinematic appearances to give a breakthrough performance that is honest, convincing and extremely moving. Bravo, Mariah! This makes us want to see more of you.

Detractors say the film’s harshness and brutality defy belief. I disagree and urge you to see the film and judge for yourself.

Now, back to the month’s release chronology.

Opening Nov. 6, "Endgame" is a truth-based feature about the downfall of apartheid in South Africa, where covert discussion was the vehicle of change. Acclaimed British screenwriter Paula Milne ("I Dreamed of Africa," 2000) wrote the script.

Opening in New York on Nov. 11, with U.S. rollout to follow, "The Good Soldier" is a superb documentary by female filmmaker Lexi Lovell, along with Michael Uys. They tell the stories of several highly decorated, solidly patriotic combat veterans who, having fought in World War II, Vietnam, the Gulf War or Iraq, decided to lay down their arms and pursue paths of peace. They know war is about killing and they believe killing is wrong. They are articulate and convincing in this extremely compelling film.

On Nov. 18, John Woo’s Chinese history-based epic "Red Cliff" opens. It is a beautifully shot, costumed and choreographed martial arts and war strategy extravaganza that focuses on the exploits of rival warriors during civil war. Wei Zhao plays a strong female character, the noble Sun Shangxiang, who insists on going to war with her brothers and, in time, turns the tide on a famous naval battle.

Spanish director Pedro Almodovar’s "Broken Embraces" opens Nov. 20 in New York, with a Dec. 11 release in Los Angeles. It’s actually less femme-centric than many his other recent films, such as "All About My Mother" (1999), "Talk To Her" (2002) and "Volver" (2006). But central to the intriguing plot is a troubled and mysterious woman brilliantly played by Penelope Cruz, the lead in many of Almodovar’s films.

"The Twilight Saga: New Moon" is the second feature based on Stephanie Meyer’s novels about young vampires. Screenwriter Melissa Rosenberg wrote the script, as she did for the first film, "Twilight." But this time "Twilight’s" director, Catherine Hardwicke, was overlooked and the project went to Chris Weitz ("American Pie," 1999, "About a Boy," 2002, and "The Golden Compass," 2007) instead. Some fans will be watching closely to see how the change in directors may affect the production.

In "Until the Light Takes Us," documentarians Audrey Ewell and Aaron Aites delve into the ideology of Norway’s underground and highly controversial Black Metal music movement and its history of violence, including a series of murders and church burnings. The musicians aren’t vampires, but it’s a dark tale indeed.

November’s second eagerly anticipated femme-centric film is "The Private Lives of Pippa Lee," opening Nov. 23 in New York and Los Angeles, with a wider release on Dec. 11. Written and directed by Rebecca Miller ("The Ballad of Jack and Rose," 2005), the film centers on Pippa (Robin Wright Penn), a well-to-do, happily married 50-year-old woman whose husband, 30 years her senior, decides they will relinquish their exciting New York City life and relocate to a retirement community. Here he has an affair with a younger woman. It’s enough to make any woman fall apart and Pippa does, revealing surprising aspects of her personality and her past.

From Walt Disney Pictures, "The Princess and the Frog" is a holiday season animated 3-D fairytale about a young girl named Princess Tiana, who lives in New Orleans during the city’s heyday of jazz. Princess Tiana is Disney’s first African American animated lead princess. The film is a music-clad, girl-driven animated fable that could be great for kids. 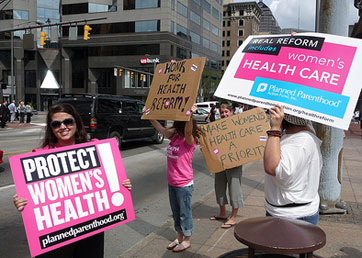