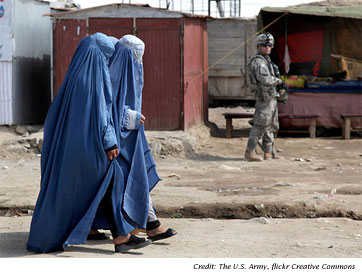 (WOMENSENEWS)–The world will be watching Thursday’s presidential election in Afghanistan for its results and for whether fraud or threats by the Taliban will jeopardize the election’s integrity.

But overlooked by much of the U.S. news media is a law signed by Afghan President Hamid Karzai in mid-July and published in the official gazette on July 27 with no public announcement.

The Shia Personal Status Law restricts Shia women’s rights in various ways. But of direct relevance to Thursday’s elections is this: It makes it illegal for a woman to vote without her husband’s permission, if custom dictates.

The law is meant to govern Afghanistan’s Shia Muslim community, which makes up about 15 percent of the population of about 30 million people.

When it was introduced in April, Karzai’s approval of the law’s initial draft–which Western news organizations began calling the Marital Rape Law in shorthand–drew global outcry for its violation of human rights, including from President Obama who called the law "abhorrent."

Secretary of State Hillary Rodham Clinton spoke out strongly against it; other NATO countries threatened to withdraw troops unless the legislation was dramatically rewritten.

Karzai sent the bill back for review, vowing that amendments would be made to protect women’s rights. Many of the repressive provisions remain, however.

In a story in the Washington Post on August 18, Human Rights Watch researcher Rachel Reid contends that Karzai made hard-line deals with Shia leaders, as well as with former warlords and abusive military commanders for the prospect of cabinet seats.

"Many of these aging warlords’ attitudes toward women are little different from those of the Taliban," she writes.

Such an exchange for election votes would be a violation of the electoral legal framework and would undermine incredible work by advocates, as well as the immense investment of taxpayer dollars for a free and fair democratic process.

But political dealings may have used women as pawns.

The undemocratic process that led to the law’s passage only adds insult to Afghanistan’s fledging and fragile democracy beyond the injuries inflicted to its women.

Melanne Verveer, the State Department’s global ambassador on women’s issues, expressed her support of Afghan women and she underscored President Obama and Secretary Clinton’s "personal commitment to women’s rights," at a June press conference in Washington.

When asked about the proposed law, Verveer said the administration was satisfied with the amendments as she understood them at the time to be included into the law.

But something apparently happened between Verveer’s trip to Afghanistan in June and Karzai’s signing of the bill in July.

Details are murky, but here’s what’s clear: The language slipped into the official gazette on July 27 still treats a vast swath of Afghanistan’s population as second-class citizens, and brings the Taliban and other fundamentalists factions back into the fold.

The review of the law led to some improvements over the first draft–including the removal of the notorious article requiring women to have sex with their husband’s once every four nights–but a human rights agency says the law still says men can withhold food from their partners if they believe their "conjugal rights" are not met.

According to press accounts and human rights research, this law forbids women the right to divorce.

From the moment a child is born, the law gives all guardianship rights to a male relative, stripping mothers of their legal rights to their own children.

The law violates women’s equal access to inheritance, allowing her to inherit only one-fourth of the estate her husband acquires, and if local custom requires, a Shia women must get permission from her husband in order to leave the house for things such as work or education. In a meeting earlier this week donor countries met to discuss action on the law.

The Times Online, U.K. edition, reported on August 17 that Canada and several European countries favored strong opposition. In that article, Dr. Frozan Fana, a female Afghan presidential candidate, who called for leaders of the donor countries to take action, is quoted as saying "this law is not according to the Afghan constitution." (While attention focuses on the three or four front running presidential candidates, more than 30 candidates are in the field, including two women.)

But the United States and Britain–the two countries with the most troops in Afghanistan–opposed making a political uproar over it out of fear of disrupting the election.

Human Rights Watch says the law directly offends Article 22 of the Afghan constitution that states that men and women "have equal rights and duties before the law."

The law also violates Afghanistan’s commitment as a party to the Convention on the Elimination of All Forms of Discrimination against Women, adopted in 1979 and so far signed by 185 countries (but not the United States).

In fact, the law violates no fewer than five of Afghanistan’s human rights obligations. This past spring, Karzai defended the law by saying that Westerners were misinterpreting it.

But this much is clear: The law violates both the Afghan constitution and international human rights laws and must be repealed immediately.

Once again, global outcry must be demanded. The women of Afghanistan deserve these fundamental human rights and dignity and we must support them in their efforts.

With the Taliban threatening general terror on election day, the women of Afghanistan should not be doubly terrorized by their president and clerical leaders.

Jeanne Brooks is outreach coordinator at the Center for Public Integrity in Washington, D.C., and before that managing director of the Fund for Independence in Journalism, a nonprofit support organization to the Center fostering independent, high-quality public service journalism in the United States and around the world. She began her career at the New Hampshire Commission on the Status of Women.

May 2009 – Pakistan: Women vs. Taliban
http://www.linktv.org/video/3891/pakistan-women-vs-taliban

Note: Women’s eNews is not responsible for the content of external Internet sites and the contents of sitethe link points to may change.

Sexual Violence in the Congo