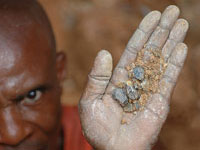 The acute crisis of sexual violence in eastern Congo is being tied to illegal mining interests in the region, which help finance the warring and competing factions that are perpetrating a worsening rape epidemic.

WASHINGTON, D.C. (WOMENSENEWS)–Activists concerned by this year’s escalation of sexual violence in eastern Congo are trying to turn up the heat on those benefitting–directly or indirectly–from illicit mineral extractions.

"Conflict minerals power our entire electronic industry," John Prendergast, co-founder of the Enough Project, told U.S. senators at a May 13 hearing on sexual violence in eastern Congo and Sudan.

The Enough Project is a Washington-based organization campaigning against genocide and crimes against humanity, including rape in eastern Congo.

Prendergast said that Congo would only have a chance at peace when something is done about the conflict-inducing demands of North America, Asia and Europe.

Together with UNICEF, Eve Ensler, author of "The Vagina Monologues," and V-Day launched an international awareness raising campaign–Stop Raping Our Greatest Resource: Power to Women and Girls in the DRC–in 2007 to end sexual violence in eastern Congo.

UNICEF estimates that hundreds of thousands of girls have been raped in the last decade in the two eastern provinces of North Kivu and South Kivu.

"Corporate greed, fueled by capitalist consumption, and the rape of women have merged into a single nightmare," Eve Ensler said at U.S. Senate hearings on May 13. "Women’s bodies are the battleground of an economic war."

Ensler said that international mining companies with significant investments in eastern Congo value economic interest over the bodies of women by trading with rebels who use rape as a tactic of war in areas rich in coltan, gold and tin.

"Military solutions are no longer an option," she said. "All they do is bring about the rape of more women."

The United States has invested more than $700 million in humanitarian aid and peacekeeping to Congo, according to the U.S. Department of State.

Prendergast said this money will do nothing to root out the economic causes of eastern Congo’s conflict and sexual violence.

He said a comprehensive long-term strategy to combat rape needs to change the economic calculus of armed groups.

The bill aims to break the link between resource exploitation and armed conflict in eastern Congo by requiring companies trading minerals with Congo or neighboring states to disclose mine locations and monitor the financing of armed groups in eastern Congo’s mineral-rich areas.

"The sooner the illicit conflict minerals trade is eliminated, the sooner the people of Congo will benefit from their own resources," said Prendergrast.

Such a process would use a tracking system for components, similar to that developed in 2007 under the Kimberly Process. This international certification scheme ensures that trade in rough diamonds doesn’t fuel war, as it did in Angola, Cote d’Ivoire, the Democratic Republic of the Congo and Sierra Leone during the 1990s.

Germany has already developed a pilot fingerprinting system for tin that could be expanded to other minerals and help establish certified trading chains, linking legitimate mining sites to the international market.