2009 marks the 15th anniversary of the International Conference on Population and Development in Cairo, Egypt. Anushay Hossain says the revolutionary promises to improve women’s reproductive health globally must not be forgotten.

(WOMENSENEWS)–When the International Conference on Population and Development took place in Cairo, Egypt, in 1994, I was just a schoolgirl in Bangladesh; too young to even begin to comprehend the importance of that gathering.

But now, in the 15th anniversary year of Cairo, I not only see its significance, I worry about the extent to which we are losing touch with that groundbreaking agenda, which shifted population policies toward empowering women rather than controlling population.

Women’s rights activists had long argued that only when women gained adequate access to education and high-salaried jobs would they be in a position to choose smaller families, thus slowing population growth.

In a breakthrough, that idea became a fundamental platform at the conference, crafted by women’s advocates from every corner of the world.

To achieve universal access to reproductive health care by 2015, donors committed to provide $18.5 billion annually by 2005. That has not happened.

Donors have fallen extremely short of promises. Less than a quarter of what was set out at the conference is currently being spent on international family planning assistance.

In the past two decades, maternal and infant mortality ratios have actually increased in regions such as South Asia and sub-Saharan Africa.

And these numbers are just estimates.

Actual numbers of women dying are much higher when you consider how many deaths go unreported.

Child marriage, for example, is a common cultural practice across parts of Asia and Africa. It’s also a major, but often silent, contributor to maternal mortality. The risk of dying from reproductive or childbirth complications increases five times for those under 15.

Frustratingly, most people do not even understand the importance of maternal health, or recognize the links between the health of a woman and that of her family, her community and her country.

The Women Deliver Initiative, which works to promote action on maternal and newborn health, estimates that 1 in 8 women die in childbirth in Afghanistan.

The fact that these ratios can vary so widely tells us that these deaths are preventable. It comes down to how much we value the lives of the women in our country.

All this means that population policies must come from countries like Bangladesh, where our maternal mortality ratios rival those of Afghanistan.

Bangladesh is in an excellent position to offer solutions on population because we are the ones living with the problem at an unimaginable scale.

The solution lies within the women’s movement, both in Bangladesh and around the world.

We already have the cure. Simple things like increasing the number of skilled birth attendants, improving their training and making sure clinics are well stocked with the most basic of supplies would make a massive difference in saving women’s lives.

Unless women determine the laws and the policies that will ultimately shape their reproductive health, all other women’s rights causes will be lost.

This year in commemorating Cairo, let us really reflect and uphold the frameworks that were articulated at the conference 15 years ago. We owe it to ourselves. We owe it to women and their families everywhere. 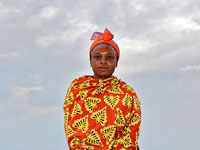