(WOMENSENEWS)–Twenty-nine and a half percent of President Clinton’s judicial appointments were women.

That’s not gender parity, but it is a high watermark.

Clinton enjoyed the advantage of being able to elevate the women President Carter had first appointed, and he had more female law graduates to draw from, as well as more women with experience serving on state courts.

But President Bush (43), like Presidents Reagan and Bush (41) before him, reversed this trend.

In the last eight years, only slightly more than 22 percent of those appointed to the federal bench have been women.

In response, lawyers, legal academics and political scientists have formed the Infinity Project to increase the gender diversity of the federal bench.

We know progress is neither steady, nor inevitable. It does not flow directly from the high percentages of women in the population, female law graduates or women in the legal profession more generally. One cannot assume a direct relationship between women in the qualified labor pool and the number of women nominated to be federal judges.

Now–to reverse the last eight years’ decline–we must push hard to put women in positions that open under President Obama, whose first judicial nomination is a man, David Hamilton, a federal district court judge in Indiana, for the Chicago-based U.S. Court of Appeals for the Seventh Circuit.

Unlike the U.S. Supreme Court, where the drop from two women out of nine to one is conspicuous, the powerful federal circuit courts that hear appeals from trial courts are less in the public eye.

But they are scarcer in the upper altitudes of the profession, the federal judiciary.

All of the nine justices currently serving on the U.S. Supreme Court first sat as a judge on a court of appeals. By failing to appoint women to the appeals courts, presidents shrink the pool of women most eligible to keep U.S. Supreme Court Justice Ginsburg company.

"There I am all alone, and it doesn’t look right," said Ginsburg recently in a lecture at Ohio State University.

The successes of the Carter Administration give us a model for how to answer such questions.

Women’s groups in that era came together and worked with Margaret McKenna, Carter’s deputy White House counsel, and other White House insiders such as Sarah Weddington and First Lady Rosalyn Carter to fill the federal bench and its judicial pipeline with women. Reporters sounded the alarm when appointments during the early years did not reflect Carter’s promise to bring women into government.

The National Women’s Political Caucus, which led efforts during the Carter Administration, has suffered hard times and no longer leads on this issue.

Even many state groups of female lawyers and judges are not pressing the case as vigorously as they did in the 1970s and 1990s. Eight years is a lifetime for nonprofit organizations whose staff and leadership turn over frequently. After each unresponsive presidential administration, it seems the wheel needs to be invented again.

Number 8, On Its Side

We take our name from the number eight turned on its side.

That’s because our specific focus is on the Eighth Circuit Court of Appeals, which is the final court of appeal for nearly all federal cases in the seven states of the circuit. Of the nearly 9,000 cases parties asked the Supreme Court to hear in the 2006 term, only four that resulted in opinions came from the Eighth Circuit. The Supreme Court hears fewer than 100 cases each year.

As of July 2005, there were 50 female appellate court judges in the federal circuit courts, but only one of these judges was from the Eighth Circuit.

In fact, since it began, the Eighth Circuit has had 61 judges. Only one of them has been a woman, Diana Murphy, who is still actively serving at 74 years of age. (Clinton nominated Bonnie Campbell but the Senate never held a vote to confirm her.)

A core group of four members, including myself, began the project in 2007 and the group expanded to more than 100 people interested in working on the project in Minnesota by 2008. With a grant from the Open Society Institute, we met in Minneapolis in October to hold a seven-state organizing conference.

Eleven judges currently sit on the Eighth Circuit Court of Appeals. (Seventeen judges serve if you count the six judges who have taken senior status.) The last nine appointments to the court have been men.

If you live in Minnesota, North Dakota, South Dakota, Iowa, Nebraska, Arkansas or Missouri please join the Infinity Project. If not, start a project in your circuit. We will not let another nine male appointments go unnoticed. We will not tolerate our courts being filled only by men. It’s time to organize again and mobilize. As the famous suffragist Elizabeth Cady Stanton wrote, "these things do not come of themselves."

Sally J. Kenney, a political scientist, is a professor of public affairs and law at the Hubert H. Humphrey Institute of Public Affairs at the University of Minnesota, where she also directs the Center on Women and Public Policy. Her research is on gender and judging, judicial selection, feminist social movements, the European Court of Justice, exclusionary employment policies, and pregnancy discrimination.
http://www.hhh.umn.edu/people/skenney/index.html 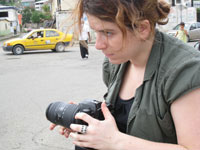