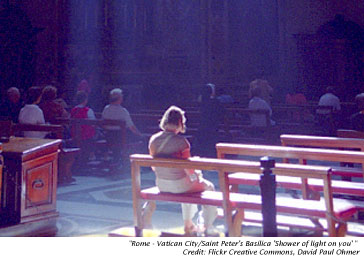 A Brazilian archbishop’s decision to excommunicate the mother of a 9-year-old rape victim who had an abortion, as well as the girl’s doctor, outrages Anne Eggebroten. She says Catholic leaders need to revisit their own religious teachings.

(WOMENSENEWS)–Saving the life of a 9-year-old rape victim is a crime, according to Brazilian Archbishop Jose Cardoso Sobrinho and Cardinal Giovanni Battista Re, head of the Congregation for Bishops at the Vatican.

The "crime" of ending the pregnancy last week in Brazil has earned excommunication for the mother and doctors of the child, but not for the stepfather who apparently sexually abused the child for three years, and her sister as well.

This kind of ethics can only marginalize a church that would like to portray itself as a leading force for moral guidance in the world.

"Life must always be protected," said Re to the daily La Stampa in Rome.

Read: unborn life. The cardinal made no comment on the need to protect little girls or their lives.

"In essence, it appears the church’s attitude and the stepfather’s attitude are no different, namely, the idea that a female body is not the girl’s or woman’s own but belongs to men to determine whatever they want with it," notes Letha Dawson Scanzoni, a writer on religion and social issues.

The abortion was legal because Brazil permits the procedure in cases of rape and to save a woman’s life, although it outlaws all other abortions. This case qualified on both counts; the child’s life was in danger because she was bearing twins and her body weight was just 80 pounds. The girl’s stepfather has been jailed and faces criminal charges.

Brazil’s president, Luiz Inacio Lula da Silva, and its progressive health minister, Jose Gomes Temporao, have criticized the excommunication and defended the doctor for performing the legal procedure. Temporao has already called for reforms to Brazil’s abortion law in the interest of protecting women’s health. About 1 million illegal abortions are performed each year in the nation, and about a quarter-million women are hospitalized after receiving botched procedures, according to the reproductive rights group Ipas.

But Father knows best. The Roman Catholic Church in Brazil and in Rome ruled that Brazilian law is wrong: the twin fetuses carried by the 9-year-old had a right to live, a right that outweighed her possible death.

On the other hand, Catholic priests who commit sexual abuse of children are not excommunicated but rehabilitated.

Prominent Catholic feminists have called the church to task, notably Frances Kissling, the former president of Catholics for Choice, and leaders of the Women’s Ordination Conference, who underline the continuing need for women in leadership of the Roman Catholic Church.

A further irony, highlighted by Aisha Taylor and Erin Saiz Hanna of the Women’s Ordination Conference, is that Pope Benedict XVI issued a March 8 proclamation of the church’s commitment to "every woman . . . obtaining complete respect for her dignity," one day after the cardinal’s "right to life" words.

Did the archbishop in Brazil or the cardinal in Rome call for prayers for this child and her family? Who is paying for the counseling this child surely needs? Is a priest or nun visiting the child and her mother and assuring them that God loves and forgives their decision, or even approves it?

Not likely. Archbishop Sobrinho reportedly told the press that abortion is an even more serious crime in the church’s view than the rape of a child.

Another Faith May Comfort Her

One blessing in the church’s decision to expel the child’s family is apparent: She will not remain within a system teaching her that she and her family have committed an unforgiveable sin, a murder. Many other religious communities exist in Brazil, some of which offer a more just interpretation of this tragedy.

Apparently these Catholic leaders have not read chapter 8 of the Gospel according to John lately. When the religious leaders of the first century are about to stone an anonymous woman (but not her partner) for adultery, Jesus warns them, "Let anyone among you who is without sin be the first to throw a stone at her."

By excommunicating the mother and doctors who made a difficult decision in an ethically complex crisis, the men of today’s church defy these words.

Honor Roll of the Excommunicated

To demonstrate the irrelevance of the church’s position, women’s groups around the world need to start an honor roll of people excommunicated by the Roman Catholic Church, starting with Maryknoll priest Roy Bourgeois, who attended and affirmed the ordination to the priesthood of a Roman Catholic woman in Kentucky last August.

Then add the names of Dr. Rivaldo Albuquerque–who performed the girl’s abortion–and others involved in this case, as well as other Catholics whom the church has silenced or excommunicated, primarily for disagreeing with the church’s position on social issues such as contraception, gay rights, women’s ordination, and clerical celibacy.

Some organization could hold an annual honors banquet with a cash award, or perhaps the excommunicated could be given travel expenses to the annual conference of a para-church group like Call to Action, where they could meet together for support.

I hear the voice of Jesus here:

"Blessed are those who are persecuted for righteousness’ sake, for theirs is the realm of heaven.

"Blessed are you when people revile you and persecute you and utter all kinds of evil against you falsely on my account. Rejoice and be glad, for your reward is great in heaven, for in the same way they persecuted the prophets who were before you." (Matthew 5:10-12)

Note: Women’s eNews is not responsible for the content of external Internet sites and the contents of Webpages we link to may change without notice.