(WOMENSENEWS)– Cheers Three women and a couple won the 2008 Right Livelihood Awards on Oct. 1. The award honors independent journalism, economic balance, peace-building, social justice and eradication of poverty and is also known as the “Alternative Nobel.” The award is given by the Right Livelihood Awards Foundation.U.S. journalist Amy Goodman, founder and host of […]

U.S. journalist Amy Goodman, founder and host of the radio and TV program “Democracy Now,” was honored for her independent political journalism that offers space to unpopular voices and the opportunity for millions of people to hear them.

Somalian activist Asha Hagi, the co-founder of Save Somali Women and Children, was rewarded for her effort to mobilize women in the decision-making and clan-based mediations of her war-ravaged nation.

German gynecologist Monika Hauser, founder of Medica Mondiale, was recognized for her commitment to seek punishment and compensation for women who are sexually abused in wartime.

Married Indian activists Krishnammal and Sankaralingam Jagannathan founded the social justice group Land for the Tillers’ Freedom. They were honored for carrying the legacy of Mahatma Gandhi by working on human sustainability issues for landless people in India.

Free condoms delivered through programs run by Marie Stopes International have been “seriously disrupted” in Ghana, Malawi, Sierra Leone, Tanzania, Uganda and Zimbabwe after the U.S. Agency for International Development invoked the 1985 Kemp-Kasten Amendment to end deliveries of condoms to the British family planning organization.

In an Oct. 1 statement Marie Stopes chief Dana Hovig said the aid was cut off because the group works in China, whose government USAID accuses of engaging in forced abortions. The 1985 amendment has been invoked to deny funding to the U.N. Population Fund, which also works in China, since 2002, but this is the first time it has been invoked to bar funding to any other group.

Hovig called the cut-off “purely political and dangerous to the lives of women” since women in the six African nations will be left with few options other than dangerous, illegal abortions. In 2007, Marie Stopes’ aid work helped prevent 12.5 million unintended pregnancies.

The U.S. government is also threatening to withhold $262 million in funding from California state programs that provide contraceptive services, prenatal care to pregnant women and testing for sexually transmitted diseases to 1.7 million low-income people, the Los Angeles Times reported Oct. 3. The Bush administration wants the state to change its method for counting the number of undocumented immigrants who use the programs because they are prohibited from receiving assistance as a matter of federal policy.

The state says the programs save taxpayers $1.4 billion annually by preventing 170,000 unintended pregnancies each year.

A witty, generous force for women in journalism passed from the scene Sept. 29. Former Newswomen’s Club of New York president Joan O’Sullivan died at 82 in her Manhattan home of cancer. O’Sullivan’s career began as a copy girl at the New York Sun in 1943. She retired as a senior editor for King Features Syndicate in 1988. At the club, with headquarters on Manhattan’s Gramercy Square, O’Sullivan oversaw the Anne O’Hare McCormick Memorial Fund, which presents annual scholarships to female students from Columbia University’s Graduate School of Journalism. In addition, she was the living link between the days when Eleanor Roosevelt was a club member and newswomen were a rarity, to the 1970s when thousands of women entered the profession to today, when the news media itself is undergoing dramatic changes. Through it all, she gave unsparingly of her time, understanding and encouragement. She was also known to give a bit of her own cash to a reporter between jobs. 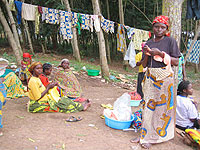