(WOMENSENEWS)– Cheers Spain’s government has issued procedures to protect the privacy of women who have abortions. Under the new rules, women’s medical records may only be opened by a court order, Agence-France Presse reported July 11. Earlier this month, Spain’s ruling Socialist party placed a relaxation of the nation’s abortion laws into its platform.The move–initiated […]

Spain’s government has issued procedures to protect the privacy of women who have abortions. Under the new rules, women’s medical records may only be opened by a court order, Agence-France Presse reported July 11. Earlier this month, Spain’s ruling Socialist party placed a relaxation of the nation’s abortion laws into its platform.

The move–initiated by Deputy Prime Minister Maria Teresa de la Vega–came after police investigating alleged irregularities of a private clinic’s abortion procedures questioned women in their homes after learning their names through clinic records. In January, private clinics went on strike for five days, accepting only emergency cases, to protest what they saw as the harassment of investigators, who had also detained a dozen doctors, according to RH Reality Check.

The world’s population is projected to rise to 7 billion in 2012 and could reach 12 billion by 2050, the United Nations warned while commemorating World Population Day on July 11. According to the U.N. Population Fund, 190 million women become pregnant each year. Around 50 million choose abortion, but unsafe procedures kill about 680,000 of them each year.

Mali has the world’s highest fertility rate and 2 in 5 women ages 15 to 19 are pregnant or have already given birth, according to the CIA World Factbook. Contraceptive use and family planning methods should increase if the world is to curb its growth rate and improve maternal health while reducing infant mortality, U.N. agencies said.

In the Palestinian territories, there are no government-supported birth control programs.

In the Philippines, former president Fidel Ramos criticized the country’s current administration for rejecting government purchase of contraceptive supplies and passing responsibility for all family planning programs on to local government, the Manila Times reported July 12. Ramos expressed concern over the influence of the Roman Catholic Church for promoting what it calls natural family planning as the only acceptable mode of birth control.

The Bush administration has blocked funding for the U.N. Population Fund since 2001, accusing the agency of supporting coercive abortion in China. On July 17, a House subcommittee approved $60 million in funding for the agency, PlanetWire.org reported, but reaffirmed the administration’s stance on China. The proposed funding could provide contraception, safe motherhood medicines and supplies, treatments for obstetric fistula and programs to end female genital mutilation and child marriage in developing nations. However, Bush is expected to refuse any funding for the U.N. agency.

Besa Luci, a native of Kosovo, is a recent graduate of the University of Missouri’s Graduate School of Journalism. 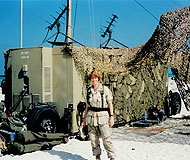