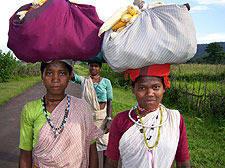 India’s land rights act enacted Jan. 1 was considered a major milestone for tribal and forest – dwelling communities. But women’s activists say it fails to protect the property rights of women, some of whom are forming collectives to hold on to land.

NAGPUR, India (WOMENSENEWS)–After spending most of her 45 years fighting for tribal people’s forest rights in the eastern Indian state of Jharkhand, Pushpa Toppo should be happy.

On Jan. 1 the government began to implement a landmark law designed to protect over 10 million tribal and forest-dwelling people from evictions, developmental neglect and violence at the hands of the Forest Department.

But Toppo is far from pleased about the Forest Rights Act.

On one hand she is quick to defend it from attacks by conservationists and resort owners who say protecting forest and wildlife–particularly the endangered Bengal tiger–is incompatible with the type of human habitation, including farming, that the law protects.

At the same time, however, she is furious that the law–crafted by legislators, officials, analysts and representatives from local groups–only provides for the issuance of deeds to single men or married couples. It is silent about the rights of single women, whether widowed, deserted or not yet married.

Toppo says this is actually a step backward for women in tribes where custom requires their husbands to give them a share of land for independent control. When a man has more than one wife, some tribes require him to provide a plot of land to each for her sustenance.

No Space to Exercise Rights

“We had expected that a legislation that talks about rights of forest-dwellers would strengthen such positive customary practices where they exist,” says Toppo. “On the ground, however, this act does not recognize these practices at all, and women are left with no space to exercise their rights under them.”

Soma KP, who has abbreviated her last name, is a researcher of women’s land rights from Delhi and she agrees. “Previous experience shows that unless they are explicitly stated, women’s land rights–both in paternal and marital homes–tend to get invisible.”

Adds Pramila Swain, an activist in Orissa in eastern India: “It is very likely that the land rights of widowed, deserted and unmarried women will get usurped by male family members at the time of rights settlement.”

Nita Hardikar, a member of a rural development group in western India, takes special issue with the law’s failure to protect the most marginalized of all tribal people: widows who survive by collecting firewood, cigarette leaves, flowers, fruit, bamboo and herbs from the forest.

In some tribes, she says, it’s customary for families to sell their produce collectively and give a widow’s share of income to her husband’s relatives.

“We demand that women’s groups and collectives–especially groups of single women, and women from landless families–should be given priority in minor forest produce collection, management and livelihood options,” says Hardikar.

Activists also criticize the law’s failure to reserve an equal place for women on local councils, which have been set up to decide which plants get planted in the forests, an issue that has been raised by the Forest Department’s clearance of tribal lands to plant commercially valuable crops such as teak.

Hardikar says women often have distinct tasks to carry out in the forests, such as collecting firewood, and the councils tend to be male-dominated. Without women on the councils, she says, fewer trees for fuel might be planted. She wants the law to be changed to require that women be involved in deciding the species that should be planted.

“Traditionally women are the ones who have worked in forests, protected and managed them and have the requisite knowledge about harvesting and regenerating,” says Marathe. “The act should provide for maximum possible representation for women in all decision-making bodies depending on the local situation.”

Soma KP says the law should be changed to require that local councils include a mix of people who depend on the forest and those who don’t. “It needs to be specified that at least 50 percent of the female membership should be from forest-dependent communities,” she says. “Otherwise these women will surely be left out in favor of women from more affluent sections.”

A coalition of women’s groups has written the Ministry of Tribal Affairs about these concerns. Women’s rights activists are proceeding cautiously, however. Although their cause has been embraced by the broader forest rights movement, the law is under legal and political assault from the conservation lobby, as well as the Forest Department, which is unwilling to relinquish control over resources. That has made a riskier political climate for calling for amendments to take in gender concerns.

Some women–skeptical of the official response they might get–are taking matters into their own hands.

Roma–a land rights activist who has dropped her caste-based surname and goes by a neutral single name–says women’s collectives in her area of Kaimur, in the northern state of Uttar Pradesh, are taking control of 15,000 acres.

“They refuse to have the lands made out in their names individually, preferring collective control,” Roma says. “The reason is that they know that neither their families nor the state will grant rights to them.”

Aparna Pallavi is a freelance journalist based in Nagpur and writes on development issues. She was a recipient of the National Foundation for India Fellowship for the year 2007.