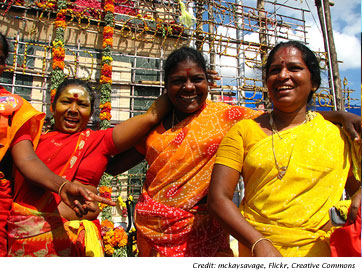 The roles of women in India are rapidly changing, along with the nation overall. Our eight-part series takes a look at how women are seizing new opportunities, everything from writing their own stories to challenging religious courts.

(WOMENSENEWS)–Women in India are facing a pivotal moment.

Their country has just celebrated the 60th anniversary of its independence, but it is still struggling to realize the potential of what it means to be the world’s largest democracy. This year, India saw the rise of the first woman, Pratibha Patil, to the presidency, 40 years after Indira Gandhi became the first female prime minister. India’s economy is growing steadily and opening up new economic opportunities for women. Women are making gains in government, civil service, business and culture.

At the same time, many are struggling to hold the tiger by the ear. More than 200 million women in India are illiterate. A population chasm is opening up as gender-selective abortions have resulted in the “disappearance” of millions of baby girls. Maternal mortality rates are among the highest in the world; 117,000 women each year die as a result of childbirth. Working women–largely agricultural laborers–earn one-third less than men. Thousands of women have been murdered in dowry disputes and domestic violence is common.

One cannot help but recall the words of India’s first prime minister, Jawaharlal Nehru, who said, “You can tell the condition of a nation by looking at the status of its women.”

The outlook, though, has changed significantly since Nehru’s time. Today, millions of Indian girls are in school. Upon taking office, Patil promised to fight for women’s rights and end female feticides. Each day, media reports tell of women challenging domestic abuse, sexual harassment and rape. They are making inroads into business and politics. Women are increasingly taking their own destinies into their hands and charting new routes for achievement.

In celebration of this pivotal moment in time, Women’s eNews is producing a series of stories to specifically look at how women’s roles are changing in modern India.