Job Security for 50-Plus at Stake in Bias Case

The Supreme Court heard an age – discrimination case Monday brought by a woman who lost her job at 51. Even though more men file such complaints women are more likely to need jobs when they are older and could have more at stake.

WASHINGTON (WOMENSENEWS)–Represented by her lawyer, Ellen Mendelsohn asked the U.S. Supreme Court Monday to ease the burden of proof for victims of age discrimination by allowing the "me too" evidence of other workers with similar complaints.

But in the oral arguments Monday the justices did little to raise Mendelsohn’s hopes.

Chief Justice John Roberts and other justices suggested that allowing "me too" evidence could glut the court system with a preponderance of testimony.

Mendelsohn, a former midlevel manager at a Sprint subsidiary in Kansas City, Mo., lost her job in 2002 at age 51, when she was the oldest manager in her unit. She sued, alleging unfair treatment because of her age, and sought to bring evidence from fellow employees with similar complaints. Sprint argued that testimony from other witnesses would be irrelevant because it involved supervisors who were not involved in Mendelsohn’s suit.

A district judge refused to admit the "me too" evidence, but an appellate court judge disagreed and ordered a new trial. Sprint appealed to the Supreme Court, which agreed to hear the case last June so it could provide guidance on the issue to lower courts.

Age discrimination is certainly not only a women’s rights concern.

In a book published in 2001 on the topic, "Age Discrimination in the American Workplace: Old at a Young Age," Raymond Gregory, a retired attorney who specialized in the issue in his New York practice, writes that nearly two-thirds of all age-discrimination cases in 1997 were brought by men.

But even though women may file fewer complaints, Gregory says women start complaining of discrimination at younger ages.

Loss of employment, meanwhile, can be harder on women, says Erica Williams, study director at the Institute for Women’s Policy Research, a think tank in Washington, D.C.

The combination of women earning less throughout their lifetimes, having less in the way of pensions or retirement accounts and having a longer life expectancy means that women in older age are more likely to be poor or disabled, to live alone, to rely on a single income or to depend on public service programs, says Williams.

"All of that has important implications for older women who are trying to secure some employment in their retirement-age years," Williams said. "If they’re also facing age discrimination, they may not be able to get a job to help them supplement Social Security benefits or what little retirement income they have."

Women begin to report age discrimination at age 40, a full decade before men begin to complain about it, Gregory said in an interview. And women are filing complaints in greater numbers as they pick up parity in the workplace.

Anti-ageism activists say both sexes battle the perception that midlife and older people are less productive and less able to keep up with technological advances in the workplace than younger workers.

But while men are seen as more distinguished and experienced as they age, Nicole Porter, an assistant law professor at the University of Toledo in Ohio who specializes in employment discrimination, says women are more often regarded as obsolete. "We think of them as staying home to bake cookies. We have a hard time perceiving them as tough businesswomen or tough litigators, or whatever they may be."

Such stereotypes put midlife and older women at greater risk for age discrimination when applying for jobs, Porter said.

A Premium on Youth

Laurie McCann, a senior attorney with the AARP, an organization in Washington, D.C., that lobbies on behalf of older men and women, agrees. "In this society, we put a premium on youth," she said. "The minute you start appearing less youthful, you’re going to start being in danger of being a victim of age discrimination. In American society, women face greater pressure to keep up their appearances when they start getting older."

Currently, midlife and older women have difficulty proving age discrimination because their employers can defend themselves by pointing out their midlife or older male employees or young female employees, said Margaret Morganroth Gullette, a resident scholar at the Women’s Studies Research Center at Brandeis University in Waltham, Mass., and an occasional commentator for Women’s eNews. As a result, midlife and older women often "fall between the cracks" of the law, she said.

To ease the burden on midlife and older women, Porter says Congress should make older women a protected class under the Age Discrimination and Employment Act, a law signed 40 years ago that bars employment discrimination against people over 40.

But advocates worry that Monday’s case–as well as several others on the high court’s docket this term–could move in another direction and make it more difficult for women to prove age discrimination.

"The Supreme Court is not that friendly of a forum for age discrimination victims in its current makeup," says the AARP’s McCann.

The court has agreed to hear two more cases relating to age discrimination this term but has not yet scheduled hearings.

In a case heard in November, the court considered whether employees can bring age discrimination lawsuits even if the Equal Employment Opportunity Commission fails to file required paperwork on time. In the case, 14 employees of FedEx Corporation say they should be able to continue their lawsuit even though the EEOC did not notify their employer of the suit within the required 60-day period.

Justices sounded sympathetic to the FedEx plaintiffs, according to a report by the Associated Press, but hinted support for the defendant in Monday’s hearing.

If the Supreme Court sides with Sprint in the Mendelsohn case–as many expect will happen because of the recent appointments of Justices Roberts and Samuel Alito–the case could limit the scope of federal laws designed to protect women, minorities, people with disabilities and others from workplace discrimination, says McCann.

The court is expected to issue a decision before it adjourns in June. 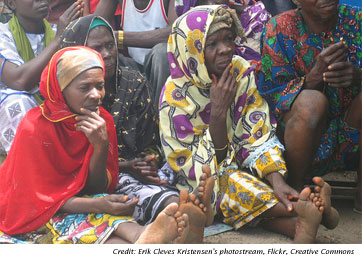