Two bills regarding the Islamic veil pending in the Italian parliament are a symbol of the country’s increasing focus on the assimilation of immigrants. Stories of fundamentalism are spurring public debate over the condition of Muslim women.

ROME (WOMENSENEWS)–The clash between immigration and assimilation is becoming more apparent in Italy especially with regard to Muslim women, whose status has been thrust into the spotlight.

The situation has not been as dramatic here as in other European countries, such as France and Germany, says Sharharzad Sholeh, president of the Rome-based Democratic Iranian Women in Italy association.

“We never had many problems here in Italy. People thought that women wearing the veil were women from the southern regions of Italy,” says Sholeh. “But now fundamentalism has arrived even here in Italy, especially in the North.”

Since last October, Daniela Santanche, a member of parliament from the conservative Alleanza Nazionale party, has been under police escort after she maintained on a television show that “the veil is not required by the Quran.”

Ali Abu Shwaima, an imam from Segrate, who was also on the show, called her an “infidel,” “hatred sower” and “ignorant,” which Santanche equated with a call for her death. In January, she received death threats via a letter in Arabic and English with pictures of Dutch filmmaker Theo Van Gogh, slain in 2004 for his movie “Submission,” which portrayed violence against women in Muslim countries.

Santanche, who wrote the book “La Donna Negata” (The Denied Woman) as an account of Muslim women living in Italy and their native countries, has taken up the cause of Muslim women’s issues and built bipartisan consent from other female politicians.

That cause includes the introduction of her bill in parliament to prohibit girls under 16 from wearing the Islamic veil in schools. Santanche said it was not a religious battle, but a battle for equality, noting that younger girls are not able to decide for themselves. “We must be sure that in this country no woman wears the veil because she is forced to, but for her own choice.”

School principals would meet families breaking the law before taking any disciplinary measure. The bill is still pending.

Some critics, however, say the bill imposes a decision where choice should be and it has spurred widespread discussions in Italy about the status of Muslim women. Francesca Koch, head of the Rome-based Italian Feminist Federation, was quoted by major newspapers as saying: “Santanche has a reduced vision of the problem, although insults and threats are not to be permitted. It is not us Western women who can tell others what is right for them.”

The bill would modify a 1975 anti-terrorism law that prohibits the use of any dress or disguise that inhibits the identification of an individual in public. In 2000, the Ministry of the Interior clarified the law by noting that turbans, chadors and Islamic veils worn for religious reasons are “integral parts of usual clothing and contribute to the identification of those who wear them, naturally provided they leave the face uncovered.”

Yet the application of the law is uncertain and left mostly to each city mayor’s interpretation. In Cremona, Monia Mzougi is to be prosecuted for wearing a burka into the courtroom trial of her husband, an imam sentenced to 10 years in a terrorist plot. Mzougi faces a two-year jail term if she is convicted.

In May, several female senators in the center-left majority proposed another veil-related bill, essentially ratifying the Interior Ministry’s clarification. Proposed by Emanuela Baio, the bill would allow religious veils or clothing as long as the face is not covered. Opposition members have criticized it as not adding anything new to the existing situation.

Assimilation at Center of Debate

While it is still not clear which of the competing bills might be approved into law, in Catholic Italy, where a woman in a veil is as likely to be a nun in a habit as a Muslim under a chador, tensions over the veil are bringing into public debate larger concerns over integration and assimilation among the nation’s 900,000 Muslim immigrants.

“It is not so much a matter of veil or not veil,” Sholeh, of Democratic Iranian Women in Italy, told Women’s eNews. “The fundamentalist frame of mind is far more dangerous than the veil itself.”

Sholeh thinks every woman should be able to make a conscious decision free from people who tell her what to think and say. “See what is happening in Iran,” says Sholeh, referring to the thousands of women arrested there for infringing the strict dress code imposed by religious leaders. “Even after 28 years, there are women who still do not accept.”

A 2007 survey of 500 Muslim women in Italy conducted by Al Maghrebiya, an Arabic newspaper published in Rome, was cited by Santanche as evidence to support her proposed ban. Among the respondents, 85 percent of women said they wore the veil “out of fear” and 95 percent believe the veil is not mandated by the Quran.

The survey also concluded that 78 percent of the women consider the veil an impediment to integration and 63 percent support Santanche’s bill.

Meanwhile, the specter of a resurgent fundamentalism crops up in the media. On March 29, “Anno Zero,” a news program aired on state-run television, explored the theme of violence against women and put on full display the testimony of a woman named Samira: After having married a “normal” man in Morocco, Samira said she was forced to wear the veil, beaten and raped, shocked with an electric stick and jailed at home without food for days with her hands and feet tied up.

“I live in constant fear that something might happen to me, in fear of being killed,” said Samira, who has since adopted Western dress and filed a complaint against her now-disappeared husband.

Italians also were shocked last year by the honor killing of Hina Saleem, a Pakistani woman who lived in the small town of Sarezzo. She was murdered by her father because “she dressed like a Westerner, had an Italian boyfriend and liked to go out dancing.”

For Italy’s Muslim immigrants, the call for assimilation is steady. In April, the Interior Ministry published a “values charter,” a non-binding, seven-page document that calls for religious freedom, rejection of anti-Semitism and terrorism, a shunning of the veil and a rejection of polygamy. Confronted with public criticism, the ministry was forced to clarify that the charter was intended for all immigrants and not specifically for Muslims.

“I don’t think women’s struggles are different in the Islamic world than they are in the Western world; they are just the same,” says Algerian-born Khaled Fouad Allam, a center-leftist Ulivo parliament deputy and university professor. “Women are the paradigm of change.”

Fouad Allam remembers that his mother wore the veil until she got married and his father made her take it off.

“The generational conflict becomes very harsh,” he adds, noting the controversy over Saleem’s murder. “What happened to the Pakistani girl is an example of social change and the ongoing struggles.”

Clara Park is a freelance writer based in Rome. She is deputy director for the Italian women’s news agency Delta News, where she covers world news, gender, human rights and development 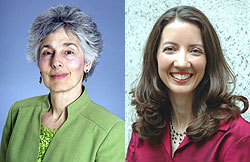