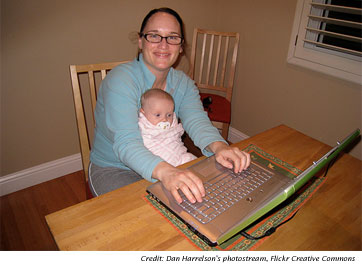 Mothers are surfing the Net these days and an explosion of sites offers advice on everything from shopping for strollers to political activism on behalf of family-friendly policies. Just as important is the chance for parent-parent contact.

(WOMENSENEWS)–For many mothers, there’s just no place like the Web.

"Web sites make me feel more secure," says 33-year-old Stacey Bowers, a librarian from Buffalo, N.Y., and mother of 6-year-old Max. "They prove that most moms have the same kinds of problems and questions. They were especially important during pregnancy, when I felt like I had an alien growing inside me and it was causing me to sweat in weird places, to feel sick all the time, to have heartburn, all that. Every time I had a routine test, I would go online first, read up on the condition they were testing for and try to alleviate my worries."

Bowers is one of approximately 97 million U.S. women who log on regularly. And according to eMarketer, a New York Web research company, they use the Internet differently than men.

Last month eMarketer reported that a 2007 study of online usage found that when men log on, their primary interest is recreation; women, on the other hand, tend to surf the Net with a clearly defined purpose.

Those seeking advice on pregnancy and child-rearing are likely to find whatever they’re looking for, from the reassurance of people in similar straits to activists working to remake the world.

St. James, N.Y.-based Moms-for-Profit.com caters to stay-at-home moms who want or need to work part-time. It charges annual dues of $95 and promises to help women launch home-based businesses or use their professional skills to become part-time consultants.

Babble.com gives urban parents what they call "a place to discuss the truth about parenting, to bypass the cliches and dig into the magical and maddening reality" of being a mom or dad. Active in promoting fathers as equal parents, co-publishers Rufus Griscom and Alisa Volkman post investigative articles and blog entries by writers with such monikers as MetroDad and CrankMama.

The online spectrum also includes Literarymama.com, a "literary magazine for the maternally inclined;" Parentcenter.com, for those whose kids are 2 to 8; and blogs by EveryDayMom, Dotmom and Blogher.

In this rapidly expanding galaxy of mothering sites, however, BabyCenter.com is the superstar.

Sixty million parents have signed up with the 10-year-old San Francisco-based site owned by consumer products giant Johnson and Johnson and receive a free monthly e-newsletter. In fact, 52 percent of pregnant women and women with children under 2 living in the United States subscribe to the site’s free monthly newsletter, says Jessica Lilie, the company’s vice president for consumer analytics. Despite the huge numbers, their readers fill a narrow niche: their median age is 32; their median household income is $71, 000; 85 percent have college degrees; and 86 percent are Caucasian.

The site’s blogs and discussion boards account for 40 percent of its traffic and are closely monitored by BabyCenter staff. When they noticed a plethora of entries about "conceptionmoons"–think honeymoon for baby-making–they teamed up with pregnancy test maker Clear Blue Easy to study the phenomenon.

BabyCenter spokesperson Danielle Simmons says that after researching the trend they better understood the impact of stress on fertility. They posted it on the site’s most popular bulletin board and urged nervous readers to relax since reducing stress is a proven conception enhancer.

Child-rearing tips, from handling tantrums to toilet-training to school misbehavior, continue to draw visitors. Francine Almash, 35, an editor and writer from Richmond Hill, N.Y., says that once her sons were born, she began using the site for "info on sleeping, specifically, how to get my kids to do it, discipline, and occasionally things about food and feeding." Almash also searched BabyCenter and other Web sites for information about postpartum depression.

The materials have been helpful, she says. Nonetheless, she bristles at the assumptions about family life, income and household organization that she has encountered.

"Most mommy-sites are geared towards straight, married moms as the primary caretaker," says Almash, who is her family’s chief wage-earner. "Though some work and some stay home, I haven’t seen many women as primary breadwinners. Of course, in their world, grandma and grandpa also show up at the drop of a hat to lend a hand. The practical information on developmental stages, strategies for sleep or feeding or handling tantrums is useful. But articles about family dynamics, relationships or money are for someone else."

Also missing, she says, are the social and political issues facing parents. She was pleased to discover MomsRising.org, one of a handful of sites–others include SingleMotherResources.com, MuckrakingMom.com and a resource for lesbian moms called Mombian.com–that look at family issues from a less typical perspective.

MomsRising.org was founded by writer Kristin Rowe-Finkbeiner and Joan Blades, co-founder of MoveOn.org, in May 2006. The site advocates a bundle of family-friendly social policies: equal pay for equal work; paid parental leave; flex-time scheduling at workplaces; universal health care for all children; affordable, quality child care; improved child-care tax credits; and an end to the media-fueled "mommy war" between stay-at-home and employed mothers.

Its Web site suggests ways to take action, both on and offline. In Washington state, for example, the site held meetings to activate members around paid parental leave. Women lobbied, had rallies, organized letter-writing and petition drives, and mobilized in support of a six-week paid leave for new parents in the state. Their grassroots efforts paid off when the bill was signed into law in April.

"When we started MomsRising, we looked at wages for women and men," says Rowe-Finkbeiner. She quickly rattles off a host of statistics gleaned from research conducted by Shelley Correll of Cornell University in 2005, which found that the wage gap between mothers and non-mothers is greater than that between men and women. In addition, she discovered that non-mothers earn 10 percent less than their male counterparts; mothers in dual-wage households earn 27 percent less; and single mothers earn between 34 and 44 percent less.

Initially, Rowe-Finkbeiner says, "We investigated the root causes of the differences and realized that the lack of family-friendly policies was the main reason for the disparity. When we looked at other countries to see what helped alleviate the wage gap and gender inequalities, it was family-friendly social policies."

"Leveling out wages is a first step to ending sexism," she continues. "Look, if you have two parents in the labor force, when it comes time to choose who will take a time out, it is only logical that the person with lesser pay will take the break."

But MomsRising isn’t only about activism. A visit to the site gives readers a chance to read blogs, share personal stories and become as active as time allows. Nonetheless, cofounders Rowe-Finkbeiner and Blades are working overtime to inject a family-friendly viewpoint into every arena, including the 2008 presidential race.

"Eighty-two percent of American women have children before age 44 and when they have them they hit a huge economic wall," says Rowe-Finkbeiner. "Seventy-two percent of moms are in the labor force but our societal support structure is still in the 1950s. Our policies and programs need to catch up to modern realities."

Eleanor J. Bader is a teacher, activist and writer from Brooklyn, N.Y. Her work appears regularly in The Brooklyn Rail, Library Journal, The NY Law Journal, The Public Eye and other progressive, feminist publications.