When Liberia’s President Ellen Johnson-Sirleaf was inaugurated a year ago she vowed to help market women who had supported her in the election. Today those supporters are anxious to improve schools they set up during the civil war.

MONROVIA, Liberia (WOMENSENEWS)–Looking regal in her golden robe and headdress, Liberian President Ellen Johnson-Sirleaf steps out of the First United Methodist Church in Monrovia and onto Ashmun Street, where barefoot children sell candy from tables and peanuts from bowls balanced on top of their heads.

Johnson-Sirleaf, the first democratically elected female head of state in Africa, doesn’t simply get into her black Mercedes and drive away. She approaches a group of children, who look up at her in awe, and asks them, one by one, if they are attending school.

Looking an older girl in the eye, she inquires–half-smiling, half-sternly–whether she is attending school. The girl hesitantly shakes her head no, not wanting to disappoint.

The president, who has called Liberia’s 70 percent illiteracy rate a stumbling block to development, has vowed to provide universal education and has emphasized the importance of educating girls in particular. Currently only about half of the nation’s children regularly attend school.

But in a country with no electricity or running water systems, Johnson-Sirleaf faces a challenge of enormous proportions. There simply isn’t enough money in the $80 million annual budget to rehabilitate a state that collapsed from 14 years of civil war as well as provide an education for all. The United States planned to give $270 million during the 2006 fiscal year, and the budget is supplemented by other international aid.

Slightly larger than Ohio, which has a state budget this year of over $54 billion, Liberia is struggling to get back on its feet with three-quarters of the population earning about $1 a day and an 80 percent unemployment rate.

Near the end of her first year in office, Johnson-Sirleaf met with Women’s eNews and said expectations are too high given the paucity of resources and the magnitude of the need.

“I still wish we could accelerate the pace but it’s happening,” Johnson-Sirleaf said. “Another couple of years they will see a big transformation.”

Nowhere are Liberia’s challenges more evident than in Monrovia’s street markets where women selling staples such as dried fish and meat are widely credited with tilting the election in Johnson-Sirleaf’s favor.

Now many of them are keeping an eye on her promise to restore the rundown markets, which are a major source of female employment and also serve as informal community centers.

In particular, the market women are anxious for help in running four schools in Montserrado County, which includes Monrovia–three operated by the government and one private–that sprang up to educate vendors’ children.

One of those market women is Sabah Johnson who, during the civil war sold peppers, onions and salt from a rickety table in Logan Town Market, located on Bushrod Island across the Mesurado Bridge from mainland Monrovia.

While she struggled to scrounge together enough money to feed her family, she worried about her children who played in the streets fearing that one day they wouldn’t come home.

“The children were dying in the war,” she said, with nowhere to go while their mothers worked. “They were wasting away in the streets.”

To give children a safe place–away from the men who recruited them as soldiers and the violence in the streets–the Logan Town chapter of the Liberia Marketing Association teamed up with UNICEF and the Liberian government in 1993 to start a school in the marketplace.

Today, the one-story, concrete building with no windows and a tin roof sits across from the garbage-strewn market and offers classes from preschool through the fourth grade. The school lacks electricity and sufficient chairs and many older children attend classes intended for those half their age.

Two years ago, the school added the fourth-grade class, and when that class is filled a fifth grade will be added, Marcia T.D. Smith, the school’s assistant supervisor, said. But with 400 registered students, it cannot handle more.

Johnson-Sirleaf hopes to build new schools for the 36 markets in Montserrado County with the first to open in March, said Vabah Gayflor, the country’s minister of gender and development.

Mary Yarkpawolo, who teaches preschool at the Logan Town Market School, said she has seen many improvements since Johnson-Sirleaf became president a year ago. The school’s roof has been fixed, new partitions have been built between the classrooms and food has occasionally been donated for school lunches.

Many of these changes have been supported through the Sirleaf Market Women’s Fund, which is part of the Ghana-based African Women Development’s Fund, and was established by the African Women and Peace Support Group in Johnson-Sirleaf’s name as a fundraising and grant-making organization.

The fund provides assistance to the market women, but Yarkpawolo says she is still overwhelmed by what needs to be done.

Yarkpawolo said that during lunchtime the lucky students whose parents can afford to give them food eat. The others wait hungrily in the classroom.

“Those who don’t have,” she says, shrugging her shoulders and raising her hands in a what-can-I-do gesture. “No money, not enough food.”

Although the war has ended, gender-based violence and rape have not. Besides providing an education, the market schools help reduce the danger for unsupervised children, said Benetta Joko Tarr, the deputy minister for planning and administration at the Ministry of Gender and Development.

Up to half of Liberia’s women were raped during the war and countless others saw their families brutally murdered. “When a woman is traumatized she can hardly take care of herself let alone her children,” Tarr said. “So the market schools became like a day care where the women could put their children.”

Now that Johnson-Sirleaf is president young girls can see the possibilities for educated women. “The girls say, ‘I want to be like Ellen,'” Tarr said. “And that has kept the girls in school.”

Another positive aspect of the schools is that many of the market women see their children studying and want to learn to read and write too, said Sarah Logan, the assistant superintendent of the Logan Town Liberia Marketing Association. Before the war, Logan said, the market had an adult literacy program, but the teachers fled, and now it is closed. “If you don’t know how to read and write no one has time for you,” she said. “Everyone overlooks you.”

Ruthie Ackerman is a freelance journalist living in Brooklyn, N.Y. She has lived and worked around the world, including Africa, where she chronicled the lives of Malawian women through a photo and essay project. 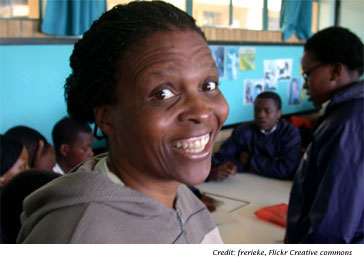