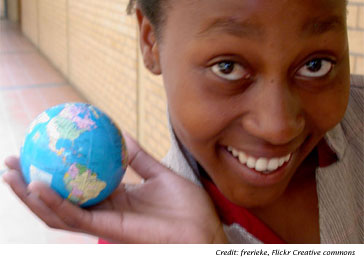 Female students in Uganda have long endured demands for sex in exchange for grades from university lecturers. First in a series on higher education in Africa.

KAMPALA, Uganda (WOMENSENEWS)–The miniskirts worn by undergraduates at Makerere University have been blamed for everything from AIDS to the disintegration of the African family.

That’s one reason why eyebrows were raised when a handful of activists suggested that young female college students were more often victims, thanks to their sexuality, than the other way around.

The practice of male lecturers at Makerere demanding sex from female students in exchange for diplomas and “carpet” grades–indicating where the transaction takes place–is well known. But recently, some administrators and women’s advocates at the university quietly drafted a sexual harassment policy to address the problem. If it is approved–which could happen as soon as May–it would be among the first of its kind in an African institution of higher learning.

“This is an issue that we have just started talking about in Uganda,” said Maria Gorette Karuhanga, a human rights lawyer who helped draft the policy. “In the absence of any document–any legal policy–people have no basis to challenge anything. This is also a challenge to the administration to address this problem, which is tarnishing the image of the university.”

Makerere, once known as the Harvard of Africa, is the alma mater of generations of prominent names from around the continent. But the university fell into disrepair during the 1970s, when dictator Idi Amin took power in Uganda, and it has yet to regain its stature. While some programs are still prestigious, Makerere undergraduates must endure overcrowded classes and second-rate facilities. Lost exams and delayed diplomas are common.

On a recent afternoon, the rolling, eucalyptus-dotted hills of the Makerere campus were crowded with students rushing to class. On the walls of the canteen, where some sat munching french fries, was a sign posted by an AIDS prevention group admonishing, “Say No to Sugar Daddies,” a reference to another well-known practice of young female students taking older, richer boyfriends to pay for tuition, books and mobile phones.

In 2004, an affirmative action program for women at the university won funding to conduct a survey to gather information on a number of issues, including sexual harassment. It concluded that while female students at Makerere were most often the victims of sexual harassment, female lecturers, secretaries and even maids employed by the college were also frequently denied promotions, pay and decent treatment if they refused to have sex with their male superiors. But those who experience sexual harassment almost always remain silent, it concluded, because they fear retribution or assume that speaking out is futile.

In a local newspaper story published last year, female students–who make up about 42 percent of the student body–complained of being routinely propositioned by lecturers during office hours. One said her teacher demanded that she accompany him to a Lake Victoria beach to discuss her grade. Dormitory residents said that custodians are known to withhold beds if girls don’t give them sex. One woman said an admissions officer would not allow her

to enroll in a master’s program because she refused his advances.

Economics are, of course, a major factor in the university social climate, says Karuhanga, in which sex is often seen as the only ticket to success a young woman has. Women come from all over Uganda to attend Makerere, where the great majority of teachers, administrators and other staff members are men. Many female students are sent by rural families who barely make enough to feed themselves. Promised scholarship money often doesn’t materialize. Extended families who are struggling to provide for their own children often can’t provide enough.

Karuhanga also attributes the problem to Uganda’s deeply patriarchal culture, which still teaches that men are superior and allowed to demand what they want. In the tradition of the Baganda, Uganda’s largest tribe, young girls learn about sex from sengas, or aunts. Today, professional sengas go door to door in the dormitories at Makerere, selling advice, love potions and charms. They also teach that a proper wife is submissive to her husband. Tradition discourages women from speaking out against ill treatment by men.

One of the few who did was a Makerere graduate who later took a job working as an administrator in the university’s school of fine arts. She had kept silent, she told Karuhanga, when, as a student, she was given a mediocre grade by a teacher whose invitations she had refused. Several years later, by now a Makerere employee, she was suspended for insubordination when she rebuffed her male boss. This time, she complained to the university disciplinary committee. The case is still pending, but Karuhanga believes it illustrates why a formal sexual harassment policy, as well as a campaign to build awareness about the problem, is needed.

“They were a bit hostile,” said Karuhanga. “The assumption is that this happened because the woman called for it.”

If approved, the new policy would generally define sexual harassment as any unwanted advance. It would put in place a committee of student and staff representatives to hear complaints confidentially and investigate allegations. Harassers would be reprimanded, disciplined or dismissed, depending on the seriousness of the offense.

So far, it has drawn a lukewarm response from the mostly male senior administrators at Makerere. The proposal is scheduled to go before the University Senate at its next meeting in May.

“Of course, some of these men are just going to say, ‘Oh, these women are out to get us,'” said Assistant Registrar Evelyn Nyakoojo, one of the architects of the draft policy. “But we are not attacking anyone. We don’t want to put anyone on the defensive.”

On the other hand, the climate may be right to push the issue. Few employers have formal rules against sexual harassment in Uganda. But last month, Parliament passed new labor laws for the first time since the 1970s, after pressure from the United States that threatened to exclude the country from the African Growth and Opportunities Act, a program that provides incentives to encourage trade with the U.S. Among other things, the new legislation outlaws sexual harassment in the workplace.

Even if the policy is approved, Karuhanga admits, enforcing it will be another matter. But she believes just getting it on the books will send an important message. “It will move us a step forward,” she said. “This whole thing is an advocacy tool. For people to know that something is boiling.”

Rachel Scheier is a freelance writer based in Kampala.

Anne Braden Knocked Down the Walls Between Us