Romney Turns Around; Rapes on Rise in West Africa

The governor originally vetoed the law that was passed by the Legislature this summer, but his veto was overridden. This week, the state public health commissioner, Paul Cote Jr., proposed that Catholic and other private hospitals be permitted to refuse to dispense emergency contraception, or Plan B, to rape victims on the grounds of religious or moral opposition. Cote based the proposal on a pre-existing law that barred the state from requiring private hospitals to dispense contraceptive devices or information.

Facing criticism from both Democrats and Republicans, Romney asked his legal advisors to review the new law. They ultimately determined it should stand without exemptions.

Although he entered office in 2002 claiming that while he personally opposed abortion he had no plans to challenge its legality, Romney publicly recanted his support for legal abortion, the Boston Globe reported. Romney’s repositioning is seen as an attempt to take more conservative social positions in preparation for a 2008 presidential run.

In another Plan B development, four Walgreens pharmacists in Illinois were suspended without pay after refusing to fill Plan B prescriptions, according to Stateline.org. The four filed complaints with the Equal Employment Opportunity Commission Dec. 7 in protest, saying they had been "effectively fired" for their moral beliefs. Illinois’ governor, Democrat Rod Blagojevich, issued an executive order requiring all pharmacists that fill birth control prescriptions to dispense emergency contraception as well.

Other News to Cheer This Week:

Sexual violence against women is on the rise in the West African nation of Cote d’Ivoire where a civil conflict has swept across the nation since 2002, the Integrated Regional Information Networks, an editorially independent news service of the U.N. has reported.

Ethnically motivated human rights violations against women occur on both sides of the conflict and the perpetrators have no fear of punishment as inquiries are rarely completed, concluded the authors of the U.N. report cited by the news agency. Rape, forced marriage and genital mutilation are increasing as is prostitution among poor women. In additional, Nigerian village girls are being lured to Cote d’Ivoire by a human trafficking network and forced into sex work once there.

The situation mimics what occurred during the decade-long civil war in nearby Sierra Leone that ended in 2002. There, over a quarter-million women and girls were raped in an effort to "humiliate, terrorize and destroy" the opposition, according to the United Nations Population Fund. Large-scale rape is also occurring in Sudan.

However, Ellen Johnson-Sirleaf, who will become next month, the first female president of neighboring Liberia and in all of Africa, vowed that rapists in that country will be punished, the news agency reported. The Liberian Parliament passed a law Dec. 1 making rape illegal in Liberia for the first time, with prison sentences ranging from seven years to life. Rape was common in Liberia’s 14-year civil conflict that ended two years ago, but the local media is reporting a recent increase in cases.

"Nobody will abuse our girls and women and get away with it," Johnson-Sirleaf said.

Other News to Jeer This Week:

— Allison Stevens contributed to this report. 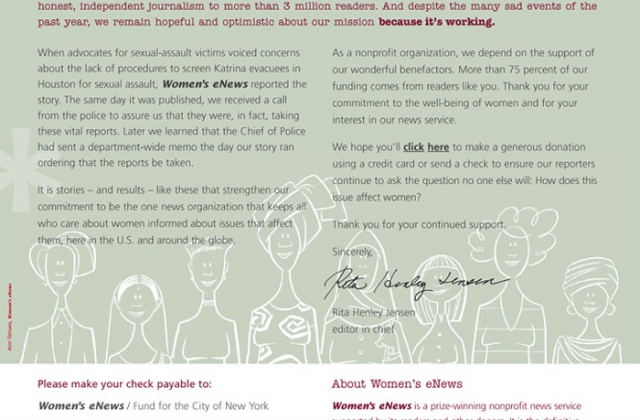