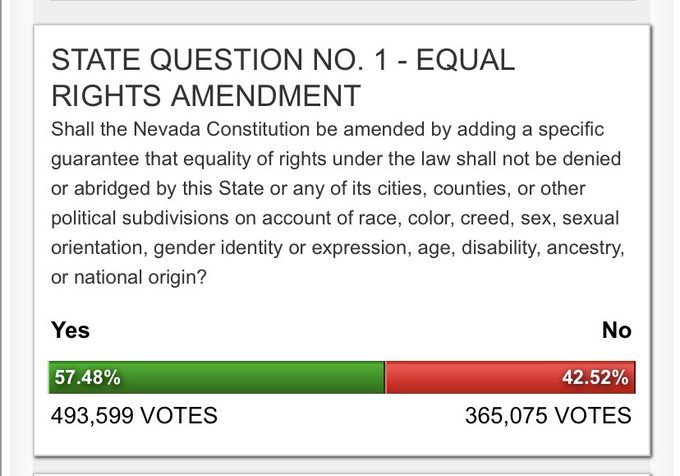 Nevada’s Universal Equal Rights Amendment: The First, but Certainly Not The Last

Nevada proves that state legislatures and voters are an equally crucial component in safeguarding human rights for all!

After inspiring mainstream focus on the federal Equal Rights Amendment by ratifying it with Illinois and Virginia, Nevada has become the first state to prohibit discrimination based on sexual orientation, gender identity, or gender expression in the text of their state-level Equal Rights Amendment. The new amendment passed the legislative sessions in 2019 and 2021 before being finally officiated by 58.6 percent of voters in November.

The Nevada ERA reads: “Equality of rights under the law shall not be denied or abridged by this State or any of its political subdivisions on account of race, color, creed, sex, sexual orientation, gender identity or expression, age, disability, ancestry or national origin.” This follows a wave of pro-LGBTQIA+ measures signed into law. For example, in 2019, Nevada banned the “trans, gay panic defense,” assuring the sexual orientation or gender identity of a victim cannot be used as a defense in a violent crime. In 2021, four bills were passed to update criminalization of HIV transmission, allow pharmacists to increase access to HIV treatment, require local governments to collect demographic information on sexual orientation and gender identity, and ensure equal access and opportunities for LGBTQ-owned businesses. A final bill required K-12 schools to teach the history and contributions of LGBTQIA+ folks, people with disabilities, immigrants, refugees, religious minorities, and the Native American, AAPI, Latinx, and Black communities.

One argument for passage was to ensure this progress is more difficult to repeal, overturn, or undermine. Another was to expand protections to trans people. André Wade, State Director of Silver State Equality, explains that there has been more movement around sexual orientation than gender identity and expression and believes that the ERA can fill consequential gaps in constitutional protection. Since 2019, Silver State Equality has been Nevada’s statewide LGBTQ+ civil rights organization. Wade states their “mission is to bring the voices of LGBTQ+ people and our allies to institutions of power to create a world that is healthy, just, and fully equal.” Partnered with the nation’s largest LGBTQ+ civil rights organization, Equality California, they advocate for pro-equality candidates and legislation. Currently, they are working on two bills that require certain insurance companies to cover gender affirming care and to protect transgender inmates within the Department of Corrections. “We’re hoping that these two bills will continue to push forward our equality movement in concert with the expansive ERA that passed,” he continues.

Arguments against the state’s passage of the ERA reflected the transphobic attitudes some communities still hold. At a public hearing in the 2021 Legislature, opponents expressed fears that cisgender women will be disadvantaged by trans rights through losing opportunities provided in sports scholarships or experiencing discomfort when sharing private spaces (such as locker rooms) with transgender girls. Although opponents composed a minority of the vote, transphobic rhetoric is a national issue. “We have to be mindful that although we are making progress through the legislative process, that on the ground and in real time, there are still people struggling with being accepted in their community and facing discrimination and harassment,” Wade continues. This has motivated Silver State Equality to focus on both legislation and “mainstream resources,” pushing for government entities to enable pro-equality policies and encourage organizations and businesses to be more accepting.

Although Nevada is the first state to enforce such an intersectional amendment, it appears that it will not be the last. Campaign manager for Nevadans for Equal Rights, Nnedi Stephens, says, “Passing the most inclusive state ERA amendment in the country uplifts Nevada as a beacon of light and a model for fighting back against hatred and bigotry in all of its forms.” Thus far, Nevadans have influenced at least one other state, Minnesota, to change its proposed amendment from, “Equality under the law shall not be abridged or denied on account of gender,” to “Equality under the law shall not be abridged or denied by this state or any of? its cities, counties, or other political subdivisions on account of race, color, creed, sex, sexual? orientation, gender identity or expression, age, disability, ancestry, or national origin.” The new proposal was drafted by seventeen representatives and five senators with ERA Minnesota, who explains, “Following the success of Nevada’s Universal Equal Rights Amendment, we adopted similar language to help truly ensure legal equality—with no qualifiers.” The ERA has been introduced in the 2023 legislative session along with a Senate and House bill to mandate Congress recognize the federal ERA has met all requirements to ratify.

Wade also shared that he often hears from colleagues and sister organizations who want to enact the same wins as Nevada. “People do look to other states to find out what could be done for their state,” Wade adds. “Even at the federal level, we hope people can see something like this passed and what comes out of it.” Activists within two other states, New York and Vermont, have been working to pass intersectional ERAs that protect individuals from discrimination based on sexual orientation, gender identity, and other marginalized identities. New York even expands upon the entities from which discrimination is prohibited, including individual people, firms, corporations, institutions, the state, and any agency or subdivision of the state. Reporting on the many constitutional rights voters approved in November, the Brennan Center for Justice states that, “While state constitutions cannot infringe on rights provided by the U.S. Constitution, they can protect additional rights.”

Compared to the federal Constitution, state constitutions appear easier to update; the average state constitution has been amended 115 times. Once state constitutional amendments reach the ballot, most states (38) allow a simple majority to enact an amendment. Why the U.S. Constitution has been more difficult to change is in part due to Article V. It requires an amendment to be supported by two-thirds of the House and Senate and ratified by three-fourths of the states: a supermajority among senators, representatives, and the states themselves. In this process, Harvard law Professor Stephen Sachs states, “Anything favored by one set of national politicians often will be reflexively opposed by another.” Whether the resulting difficulty was intended by the framers or even whether the framers believed original intent should be a valid interpretation of the Constitution are debated.

At present, the U.S. Constitution only provides 26 of the 60 human rights found to be protected in international constitutions. Some basic rights that the U.S. does include in its Constitution are the right to health care, food, and social security and, broadly, women’s rights. While activists are still fighting for the ERA to be enshrined in the Constitution, Nevada proves that state legislatures and voters are an equally crucial component in safeguarding human rights for all. 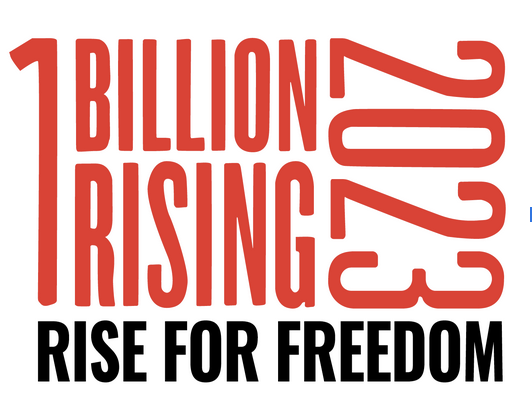 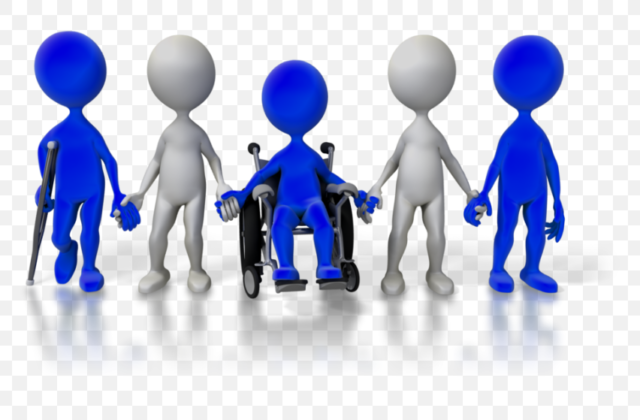 Diversity is Not About Nouns: Finding Commonalities with the Disabilities Community