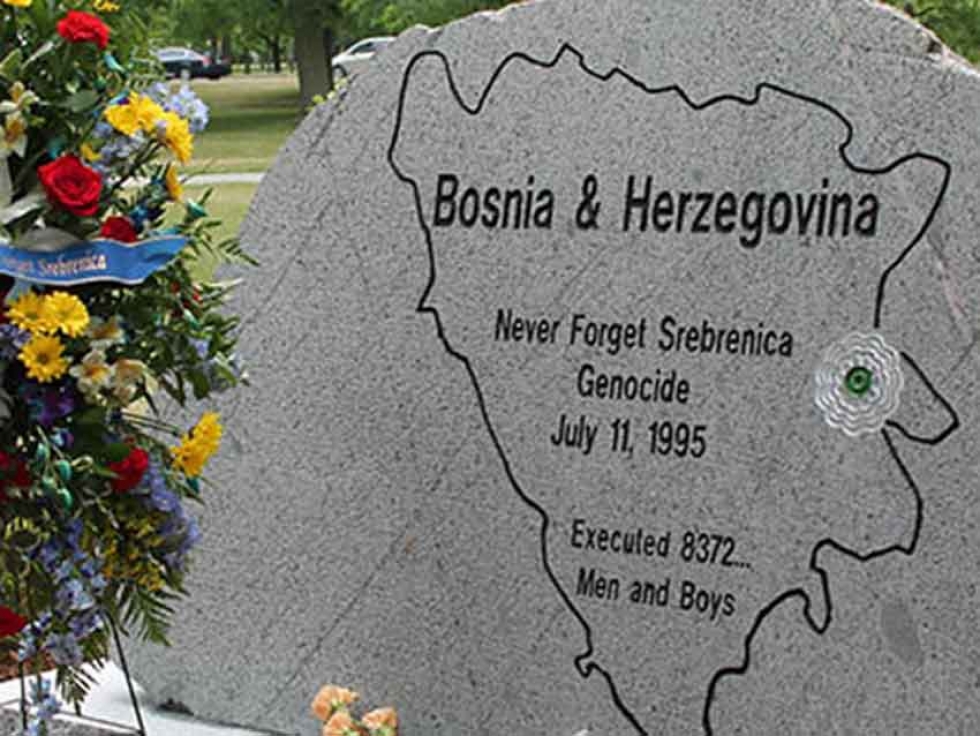 On July 11, 1995, the horrors of the only European genocide since World War II reached their nadir with the massacre of an estimated 8,000 men and boys at the Bosnian town of Srebrenica. While UN “protectors” watched passively, Serb forces separated these unarmed husbands, fathers, sons and brothers from their female family members, boarded them on buses and drove them off to mass murder and mass graves.  What had previously been unthinkable, especially on European soil, shocked the world in its cold brutality.

Left behind were thousands of women, overwhelmingly the wives of the farmers who worked the land in this agrarian area, for whom the man of the house was its center: The breadwinner who ran the farm and protected the family, whose role formed the core of an economic and social unit.

What is remarkable in the wake of this world-shaking mass murder is how the women, the vast majority of whom were uneducated, stepped forward, demonstrating the kind of resilience that knits together not just families but communities and nations, if only we would tap it. These women, whose story is largely untold, rose to this extraordinary occasion in three notable ways.

First, they demonstrated courage and resilience in returning to the land that the enemy was attempting to take from them. They filled the shoes of their dead husbands and took charge of the farms, mobilizing remaining family members and relying on neighbors to survive and carry on. In some cases, these women became remarkably successful, forming cooperatives to sell produce well beyond their communities.  Berries grow in abundance close to the Drina River that flows nearby.  Blackberries and raspberries are exported internationally and known for their excellence. The women took advantage of grants facilitated by the deeply flawed Dayton Accords that stopped the war and sent their children to school. They strengthened their families by insisting that their children broaden their horizons. Their daughters and sons are now proud doctors and professors all over the world, contributing to society in new ways because the mothers and wives whose husbands were slaughtered in Srebrenica persevered through unspeakable grief and trauma and rebuilt.

The women went further, into roles even less likely for wives and mothers who had spent most of their lives gathering and preparing food and tending their families. They demanded justice. Unprepared for the work of advocacy, they nevertheless organized and learned on the job, calling for accountability from the International Tribunal for the Former Yugoslavia. Their voices were heard as Serbian President Slobodan Milosevic, regional leader Radovan Karadzic, and military commander Ratko Mladic were arrested and put on trial for war crimes, including – historic for international jurisprudence – the charges of genocide.  Milosevic died in custody before his trial concluded. Mladic and Karadzic are behind bars. The women who testified against these three men demonstrated great courage and composure. Not only were they managing their grief, but by speaking out in an international spotlight they risked being ostracized back home, where the Serbs, who had waged war on their people (Bosniak, traditionally Muslim) were still in control.

The women also organized to memorialize their murdered men. They advocated for the exhumation, identification and burial of their loved ones into a sacred place in the killing fields. Today the Srebrenica Memorial Center encompasses a large grave site, listing the names of those killed, and includes an outdoor mosque and a memorial room where photographs graphically portray the atrocities and the tireless exhumation efforts. The Center, dedicated in 2003 by US President Bill Clinton, operates against the backdrop of continued denial that the genocide ever happened. Nonetheless, it has attracted more than one million visitors to date. Many come as delegations, including students from all over the world. As with other such sites, the message of the memorial is clear:  Never again.

A few months after the Srebrenica massacre, women from all over the world converged in Beijing for a conference that would become a milestone in the story of women’s rights. There, influenced in part by the experience of the women of Srebrenica and more broadly throughout Bosnia, for the first time the issue of women and war, beyond victimhood, crystalized as an idea that would eventually become policy.  Women wanted a seat at the table, bringing their resilience and advocacy to preventing war, or stopping or recovering from it. Five years later the UN would pass a resolution calling for women’s full involvement in building peace. In time the field known as Women, Peace and Security would be well established in foreign policy.

The women of Srebrenica played a significant role in reshaping how we think of war and peace. Their legacy is a lasting tribute not only to their own remarkable rebuilding but to the men and boys whose lives are remembered on this anniversary.

Miki Jacevic, who was a student leader from Sarajevo at the time of the Srebrenica genocide, is Vice-Chair of Inclusive Security, founded in 1999 to integrate women’s leadership into peace processes worldwide.