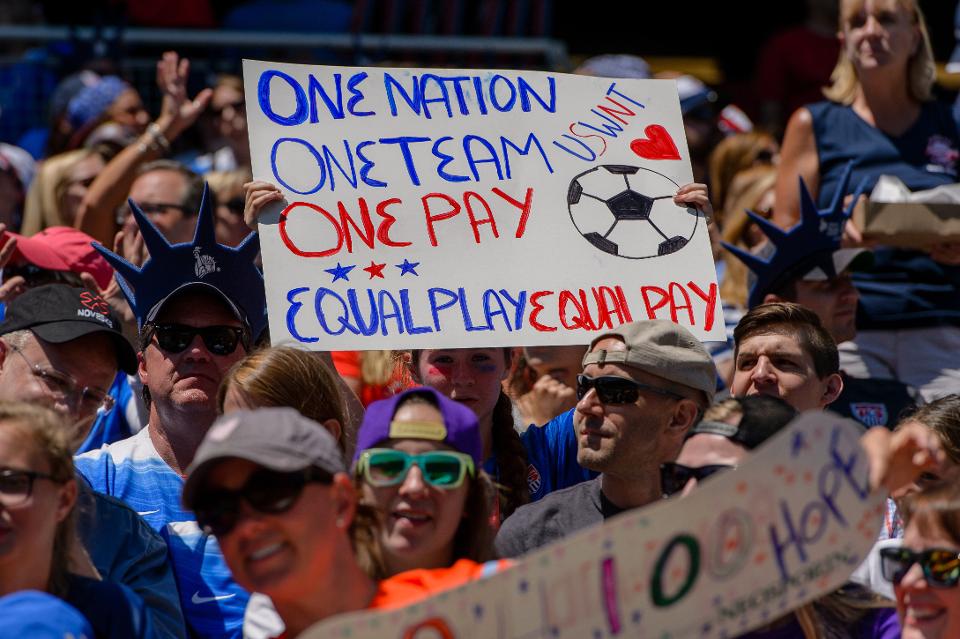 With the summer season now coming to an informal end post-Labor Day weekend, it is important to reflect on one of the most inspiring and memorable events that took place just two months ago. On July 7, the United States national team beat the Netherlands team by a score of 2-0, to win the title for the fourth time. Yet it is important to reflect on what this team, as well as this year’s World Cup, stood for beyond mere numbers on a scoreboard.

As two very powerful men, Gianni Infantino, the President of FIFA, and Emmanuel Macron, the president of France, walked up to the stadium’s stage after the match ended, they were booed by a majority soccer fans. Choosing to stand in solidarity with the US women’s national team in their fight for equality as the stadium chanted “Equal Pay!” the fans were protesting FIFA’s refusal to provide equal pay for equal play by paying women players less than male players. The overall prize money for the men’s 2018 World Cup is $400 million, for example, whereas the prize money shared by all twenty-four teams for the 2019 Women’s World Cup is $30 million, only 7.5% of the men’s prize money.

The US women’s soccer team has already undertaken legal battles for equal pay since the last time they won the World Cup in 2015. In 2016, players from the United States women’s national team filed a lawsuit against the US Soccer Federation for institutional gender discrimination. These players – Megan Rapinoe, Alex Morgan, Hope Solo, Carli Lloyd, and Becky Sauerbrunn – reported their mistreatment to the Equal Employment Opportunity Commission.

But since gender discrimination is not protected by the US Constitution, so sex discrimination is still not considered illegal. While the Constitution specifies the equal right for women and men to vote, no other equal rights are protected. Without an Equal Rights Amendment, therefore, the rights guaranteed under the Constitution are not explicitly granted to everyone regardless of sex, and advocates for an Equal Rights Amendment believe if it were it would ultimately hold the US Soccer Federation accountable for its discriminatory actions.

A bit of recent history: In 2017, a collective bargaining deal was developed between the US women’s national soccer team and the US Soccer Federation which did increase base pay and game bonuses for players, but did not grant equal pay for the women’s national team. This year, on International Women’s Day (March 8th), all twenty-eight players of the national team filed a federal lawsuit against the US Soccer Federation demanding equal pay and equal rights. In the lawsuit the team states that, compared to their male counterparts, the US women’s team faces lower quality playing conditions, under-marketing, and inferior transportation. Compared to the men’s team, the women’s team also plays its games on surfaces that have not been upgraded in years, limiting the number of fans willing to attend matches. Additionally, before the lawsuit was filed, the US Soccer Federation did not reserve charter flights for the women’s national team, yet the men’s team flew on charter flights 17 times in 2017.

After much criticism from the players and their fans, the US Soccer Federation did agree to meet with the US Women’s national soccer team in early August 2019 to mediate their conflict and avoid a federal trial, but the negotiations were unsuccessful and ended on Wednesday, August 14th. Instead of resolving disputes regarding equal pay, USSF President Carlos Cordeiro released open letters presenting information that Cordeiro believes prove the USSF is innocent of institutional sex discrimination. The USSF also hired lobbyists in Washington to undermine the claims made by the women’s national team during the trial. Concurrently, Molly Levinson, a spokeswoman for the twenty-eight players who filed the lawsuit, stated in response, “It is clear that USSF, including its board of directors and President Carlos Cordeiro, fully intend to continue to compensate women players less than men. They will not succeed.” Since no settlement was achieved, the case will continue in federal court.

Although advocates of the ERA believe the Amendment would provide the court with a clear federal judicial standard to follow in cases of sex discrimination, opponents of the Amendment, such as the Eagle Forum, a nonprofit organization founded by Phyllis Schlafley in 1972, assert that passage would actually not increase rights for women. Instead, they contend that the Equal Pay Act of 1963 (which prohibits wage discrimination on the basis of sex) and the Fourteenth Amendment are sufficient to close the gender pay gap. They cite Philip B. Kurland, an American Justice who wrote in 1978 in Chicago Unbound that the passage of the Equal Rights Amendment would not change the treatment of women in nongovernmental organizations, Kurland claimed that efforts to pass the Amendment would limit the energy put into the more important legislative fights for equality. While advocates for the ERA believe it is a necessary component for gender equality in sports, opponents continue to display uncertainty about its impact to thwart true gender equality.

But it doesn’t stop there. Although the United States is currently leading the fight for equal pay and equal rights in soccer due to their public platform and victories in the World Cup, several other women’s international soccer teams have expressed their frustrations as well. Germany’s national women’s team addressed gender inequality through witty jokes in their World Cup ad with Commerzbank. In the ad the players declare, “We play for a nation that doesn’t even know our names!” In the video, Germany’s players not only address the gender pay gap, but also their fight to gain popularity and support in their own country.

In Australia, female soccer players have also experienced unfair treatment in soccer leagues and tournaments. The Australian women’s soccer team is therefore fighting for equal pay through its “Our Goal is Now” campaign, which advocates for urgency in achieving gender equality using soccer as a platform to end sex discrimination. It has thus far attempted to do so by cancelling a sold-out tour of the United States over their below minimum-wage salaries in 2015, and has been at the forefront of the fight for equal pay in soccer. Although Australia passed the Sex Discrimination Act in 1984, to end discrimination on the basis of sex, this law is still not reflected in the paychecks of the women’s national team players.

Nigeria’s national women’s soccer team also protested their unequal treatment after being eliminated from the 2019 World Cup in a match against Germany. The team conducted a sit-in protest at their hotel rooms, declaring that they would not leave until their bonuses from games against Senegal and Gambia, which were played two years ago, are paid. The team had also not received daily paychecks from this year’s World Cup competition. Comparatively, Nigeria’s men’s national team not only earns higher daily stipends than the women’s team, but also receives about $5,000 in bonuses per game, whereas female players receive only about $1,500 in bonuses.

As women’s teams are striving to correct these injustices, it is important to consider the next best steps to end gender discrimination in all sports. The United States national team, specifically, will have no choice but to defend its lawsuit while lacking the constitutional grounds. And that’s why Carol Jenkins, co-President and CEO of the ERA Coalition, a group of organizations and members working to pass an Equal Rights Amendment, believes the next steps for gender equality in sports must include its passage:

“What the Equal Rights Amendment would bring to this excitement is the fundamental right to equality that goes beyond equalizing money to fundamental rights and protections, written into the Constitution, the playbook for life in America. Right now, wins must be taken on a case-by-case procedure: In sports, it was tennis first, now soccer. What the ERA would give is a base of equality in every realm: It would be understood, and enforceable by law.”

Although 94% of Americans support constitutional gender equality, 80% are still unaware that a law defining it does not already exist. The attention that the US women’s national soccer team brought to unequal pay is now in the forefront. Simultaneously, its passage could provide the women’s soccer team, as well as all professional women’s teams, with the constitutional support to finally end gender inequality in all sports.

The Sy Syms Foundation has been supporting progress in education, science and the arts since 1885.