Twenty-five enthusiastic but slightly wary young women signed on for a free introductory United Women Firefighters (UWF) Training Program Open House last month in New York City. During the four-hour event, co-sponsored by The New York Women’s Foundation, participants learned not only about the type of fire-retardant gloves they are required to wear, but where to buy the 50-pound weighted packs they’ll need for training, as well as key details about filling out forms and decoding other New York Fire Department (FDNY) expectations. One such expectation: They must show up one half-hour early for every appointment. (In the fire department, if you show up on time, you’re late.)

The women were also taught gym exercises in preparation for the physical exam. Training workouts included simulated firefighting drills such as pulling a 170-pound-loaded sled hand-over-hand by rope; tugging a 165-pound dummy back-and-forth across the studio, and dragging a fire hose tied to a 70-pound bag. Additionally, forcible entry drills, stair-training while wearing a 50-pound vest, grip strength builders and military-style calisthenics were also undertaken.

This day’s group included diverse women from all five boroughs, African-American, Asian, Latina and white women, and women of many different sizes and shapes. “Yet,” says instructor Regina Wilson, the UWF’s representative for Brooklyn and Staten Island, “You can’t judge which women make it into the elite ranks of female firefighters just by looking at them.” As the first African-American woman hired by the FDNY in 1999, she should know. “We’ve said, she’s too small or she’s obese, she won’t make it – but we’ve been wrong. We have all kinds of personalities, shapes, and beliefs. The only thing that matters is passion and desire and not wanting to give up,” Regina says. Even fearlessness need not be a prerequisite, because courage can be taught.  “Some firefighters are afraid of heights or the dark,” Regina continues. “I was claustrophobic. But you learn how to overcome. Your mind has to convince your body to do it and not to give up.” 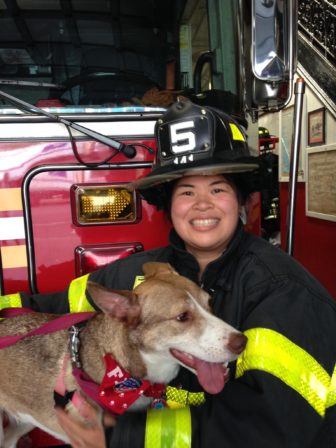 Led by Sarinya Srisakul, president of UWF’s board, the UWF’s training program aims to not only prepare women to pass the physical exam (women accepted into the group must have already passed FDNY’s written test), but to also support them through any difficulties they may encounter throughout their careers.  “We mentor the women while they’re in the Fire Academy and provide workshops before they start so they are the best prepared that they can be,” Srisakul says. After women are hired, UWF holds meetings, workshops and other gatherings to provide ongoing support.  “We also advocate for our members, should they face any issues in their firehouses,” Srisakul adds.

Sarinya, who speaks Thai and Spanish as well as English, was the first Asian-American female to join the FDNY. She began her career as a fine arts student, while Regina came to the fire department from the corporate world. Some candidates in today’s group have family members in the police force; others have backgrounds in the military or as EMS technicians. Regardless, all want to dedicate themselves to hands-on work serving the public.

The odds against women, and the challenges ahead, still generate heat. New York City didn’t allow any women to take the firefighters’ test until 1977.  Today, although New York has the largest municipal fire department in the nation, it has the second-worst record of hiring females, with women comprising only one percent of its workforce. (To put this in perspective, even San Francisco, the No. 1 force for hiring women, has only 15 percent.) In addition to dealing with physical challenges that can include carrying 125 pounds of gear and equipment up multiple flights of stairs, women face skepticism from the public and from other professionals as well.

“When I was training for the test in the gym, guys would tell me, ‘You’re going to fail,’” Sarinya recalls. “There was just a general attitude that women can’t do this. Even the woman proctor who gave the test laughed at us.”

After a 13-year career, Sarinya is still the only female in her firehouse – not to mention the only vegan. Although her professional brothers have become a second family, “I still search for that sense of belonging. Ultimately, it’s difficult when you are the ‘odd one out’ in the group.  It would be tremendous to be able to work with at least one other woman on a regular basis.”

Until then, she is determined to lead UWF in making this career more accessible to future generations of women. “Between me and Regina, we have 19 and 13 years’ worth of advice,” Sarinya says. “We’ve seen women before us treated terribly; we’ve seen almost everything. Now we have a rich base of knowledge about how to handle issues and we all piggyback off each other – which makes it a lot better.”

This is the seventh and final article of our 2018 series, IN FOCUS: Eye on Changemakers, a collaboration between Women’s eNews and The New York Women’s Foundation (NYWF) to shed light on some of New York City’s most inspiring women-led non-profit organizations dedicated to empowering women and girls of diverse racial, cultural and socio-economic backgrounds.

Catherine Wald is a contributing writer and editor at Women’s eNews. She has written for Woman’s Day, The New York Times, Reader’s Digest, Writers Digest and Poets & Writers, and has provided article, presentation and speechwriting services to corporations such as Pepsi and Ernst & Young. Recipient of numerous grants to lead creative writing workshops in the tri-state area, she is a published poet and translator, and author of, The Resilient Writer: Tales of Rejection and Triumph (Persea Books, 2005).