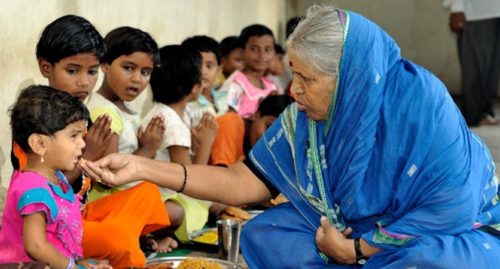 Sindhutai Sapkal was nine months pregnant when her abusive husband kicked her in the stomach in a fit of anger. He then dragged her out of their house in Wardha district, Maharashtra, and pushed her into the cow shed. So traumatized was the 20-year-old that she went into labor and passed out after giving birth. When she regained consciousness, Sindhutai realized she had to cut the umbilical cord herself since there was no one to help her. To do so, it required 16 blows from a stone she found in the cow shed. Although she was exhausted and still in pain, Sindhutai cradled her newborn daughter in her arms and walked a few kilometers to her native home hoping to find refuge. But here, too, she was turned away. Hungry and homeless, Sindhutai was forced to take shelter in a cremation ground. As she walked alongside the funeral pyres to find a safe place to rest, she stumbled upon wheat flour left behind by relatives for their loved ones. When darkness fell and there was no one around, Sindhutai collected the flour and baked roti (Indian bread) on the burning embers of the dying pyres to feed herself. When it became difficult to survive in this manner, she took to begging and singing devotional songs at temples and railway stations to keep her and her infant daughter  alive.

One day she found a baby crying beside his dead mother on the railway platform. Deeply moved by his plight, Sindhutai took him under her wing, after the authorities refused to take him. Since then her life changed. She began sharing whatever she earned to feed abandoned and orphan children. As their numbers grew, Sindhutai began to beg more and more so that she could give the children a loving home and a good education. Over the last 50 years, Sindhutai has transformed the lives of over 1,400 orphans, many of whom are now doctors, academics and lawyers. Popularly known as the Mother of 1000 orphans, Sindhutai has 282 sons-in-law, 48 daughters-in-law, and over 300 grandchildren.

“I cried a lot after I was thrown out. I also thought of ending my life many times when I was unable to cope. But the day I understood the mission of my life was to care for orphaned children, I stopped crying and started living for them. I’m 70 years old and still begging. The only difference is that I don’t beg for a living in front of temples any more. I give public talks and ask for money for my children. Only when I give a bhashan (talk) do they get rations. This is the way the orphanages run,” says the silver-haired Sindhutai.

Earlier this year, Sindhutai was honored by the President of India with the highest civilian award for women for her extraordinary social work. Although she has received numerous awards, including from her own state government of Maharashtra, this one was a special moment. “I was called chindi (a torn piece of cloth) by my parents because I was an unwanted child. I was not allowed to study after Class 4 and was only 10 years old when I was married to a cow herder, three times my age. Even my husband didn’t bother about my pregnancy when he threw me out. Despite all my problems, I managed to survive. Being recognized by the President of the country is a great honor. Now everybody who rejected me wants to felicitate me, including my marital and natal family,” says Sindhutai, with a big smile.

Has she forgiven them?  Yes, she says. In fact, she was grateful they had rejected her. “Had it not been for their cruelty, I would have never become the person I am today. I did feel a sense of satisfaction when my husband came up to me with tears in his eyes. I thought to myself that many years ago I was the one who was crying and today he was crying. I felt God had done justice. But then I thought to myself that I shouldn’t feel happy because had he not thrown me out. Could I have become a mother of 1000 children and travelled to 17 countries to talk about my life? So I asked my husband not to cry as I had forgiven him. I also asked him to come and live in the children’s home as he was ill and needed to be looked after. The only condition I put before him was that he should live there like my child and not as my husband. If I could be a mother to a 1000 children, I could be his too,” she revealed.

In fact, her devotion to orphaned children is so strong that she gave up her own three-year-old biological daughter to be raised by a charitable trust in Pune. “I didn’t want to discriminate between my own child and someone else’s child. Also, my own child might make these children feel they were adopted. So to ensure that I was able to devote my time and love to these abandoned children, I decided to give my child to Shrimant Dagdu Sheth Halwai Trust and let them take care of her upbringing. It was a tough decision to take but I don’t regret it,” says Sindhutai.

Luckily for Sindhutai, neither did her daughter, Mamata. She supported her mother and today, helps her run one of the four orphanages.” I used to visit her and tell her about the children I adopted. She never complained. She would tell me not to worry about her and concentrate on ensuring the children at the Home received good education. I am still following her advice and will continue to do so until I die,” she says smilingly.

Swapna Majumdar is an independent journalist based in New Delhi and writes on development and gender.