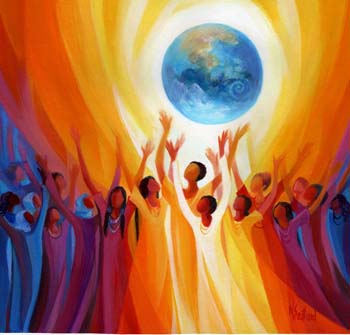 Women are frequently on the front lines in the battle against climate change, as they are often hit hardest by environmental issues – especially in developing countries. UN figures suggest that around 80 percent of people displaced by climate change are women – a fact recognized in the 2015 Paris Agreement. As primary providers of food and fuel, they are most likely to notice the signs of climate change and to be the first to feel its effects. So, it’s not surprising that they are usually the first group to take action.

We’ve seen a drastic shift in in the last few decades, with more women making their way into environmental leadership positions. I see this first-hand within our Green Building Council (GBC) movement, where 50 percent of our top-tier GBCs are led by women working within the male-dominated world of building and construction.

Women have a strong and powerful voice and while there are many environmental thought leaders that I admire, the five women below are the ones I chose to celebrate this Earth Day.

Anne Hidalgo is a mayor on a mission! In addition to launching a range of measures to reduce car traffic and pollution in Paris, Hidalgo is a major player on the world stage. She’s the first female Chair of C40 – a network of world megacities committed to addressing climate change. A vocal advocate for the role of women, she led the creation of C40’s #Women4Climate initiative, which aims to inspire and empower the next generation of women climate leaders.

Growing up in rural Kenya, Wangari Maathai witnessed first-hand the effect of deforestation and climate change on food and water security and realized the devastating impact this had on the lives of the women who produced food in the region. She continued to champion women’s rights through her life and it was while serving on the National Council of Women of Kenya that she introduced the idea of community-based tree planting. This took shape as the Green Belt Movement and has today helped plant over 50 million trees across Africa. One of the first people to acknowledge the link between the environment and human rights, she was recognized with the Nobel Peace Prize in 2004 – the first African woman to be awarded a Nobel prize – and later named a UN Messenger for Peace.

Christiana Figueres achieved what was seen by many as virtually impossible – replacing the failed Kyoto climate agreement with the Paris Agreement, which was embraced by almost every country around the world, large and small. The diplomacy, the negotiation, and the tireless and persistent commitment behind this marathon stretch to reach the agreement were unparalleled. But so was her hope, her belief and her optimism that good would prevail and national governments – so often protecting their own self-interests – would set those aside to protect countries other than themselves, and to improve the lives of generations not yet even born. I never fail to marvel and admire how this one woman brought together a movement of over 100 countries with differing cultural, economic and social viewpoints.

Nobody has done more than Sheila Watt-Cloutier to protect the rights of the Inuit of the Arctic in Canada, my home country. As an Inuit herself, she understands the impact of climate change in the North, and in particular how the livelihoods and culture of the Arctic indigenous peoples are increasingly threatened by it. She has championed this issue on the world stage, which has not only raised awareness on climate change, but the rights of the Inuit. In her role as President of the Inuit Circumpolar Council (ICC) Canada, she spoke on the behalf of the Inuit in the negotiation of the Stockholm Convention’s ban on persistent organic pollutants, which have a heavy presence in the Arctic food chain. Her petition to the Inter-American Commission on Human Rights (IACHR) changed the climate change conversation by establishing how greenhouse gas emissions violate the collective human rights of the Inuit. Today, she continues to advocate for climate action as an advisor to the Ecofiscal Commission.

You may know Margaret Atwood because of The Handmaid’s Tale, but she is also the author of some of the most well-known fiction on climate change, sometimes called “cli-fi,” including The Year of the Flood. The novel is seen and told through the eyes of women and sends a strong message through a complex and compelling story that if we continue on a certain path, the future will be unrecognizable, the earth uninhabitable and the changes wrought on humanity unimaginable. Through her tireless campaigning, advocacy and creative writing on climate change, we see that the status quo can successfully be challenged through compelling story-telling, creativity and wit. As Margaret Atwood said, “I think calling it climate change is rather limiting. I would rather call it the everything change.”

These leaders paint a world that is not black and white, but a vibrant shade of green. They make me want to build a greener planet for the next generation and to persuade governments, businesses and individuals to do the same. They show me that while the challenge is great, following our hearts and being true to who we are as women is the path to change.

Terri Wills is the CEO of the World Green Building Council, a network of Green Building Councils in over 70 countries. WorldGBC’s mission is to create green buildings for everyone, everywhere, enabling people and planet to thrive today and tomorrow. In March 2017, Terri was named as one of 10 women leading the global push towards climate action, gender equality and social justice for all by Eco-Business. Terri is based in London, UK.