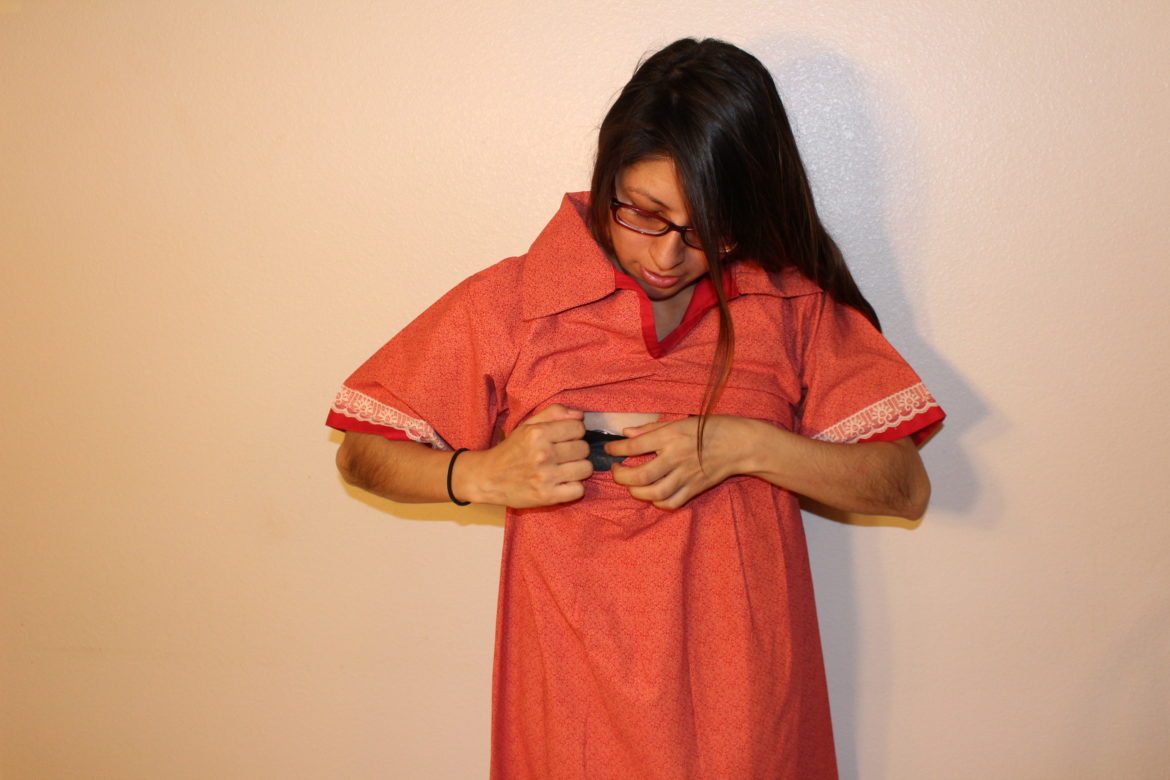 When 28 year-old Rachael Lorenzo, a member of the Pueblo of Laguna tribe, located about 45 miles west of Albuquerque, New Mexico, had her daughter Adalie, she couldn’t participate in many of the traditional ceremonies because the regalia she had to wear didn’t allow for convenient breastfeeding.

For major ceremonies and feast days which occur about 20 times a year, women wear two-layered regalia— a patterned tea-length dress underneath and “manta” (pronounced “män-tuh”), which has been worn for over 500 years, on top. But the high necks, long lengths, and multiple layers of garb make it impossible to breastfeed easily. Rachael recalls having to find a place to nearly completely disrobe in order to feed her baby, therefore missing out on full participation in the traditions that she was raised with and deeply values.

“I sacrificed time grounding myself in my culture and tradition, but as a new mom I couldn’t join my family in the way I wanted because my regalia didn’t allow me to breastfeed conveniently,” Lorenzo says. She knew, with so many new moms and young babies present at the ceremonies, she couldn’t be the only one having this problem.

So Lorenzo, founder of Indigenous Women Rising, joined forces with other local advocates of color and set out to design Pueblo mantas that are more breastfeeding-friendly—the first ever effort to do so. Working directly with Pueblo seamstresses, modifications were made, such as adding a crossover top or hidden clasps across the shoulders and underarms to facilitate nursing, while still maintaining the cultural integrity of the dress. Lorenzo’s team and their fashion forward project is just one of four, female-led “community innovation teams” taking part in the Make the Breast Pump Not Suck Hackathon on April 28-29th at the MIT Media Lab.

“Indigenous peoples have been innovating everything from regalia and silversmithing to irrigation and business models for centuries,” Lorenzo says. “The hackathon is a chance to use fashion design and design theory as a mechanism to reclaim breastfeeding and dismantle the stereotypes about Native peoples in this country.”

This coming weekend technologists, designers, policymakers, and over 30 companies from around the world will descend onto one of the top engineering institutions to improve breast pump technology. This is a much-needed effort as maternal and infant health is often one of the most under-innovated areas of public health. When the first hackathon took place in 2014, it led to the development of smart pumps, new apps and better services for breastfeeding moms. One of the hack-a-thon’s most notable participants became a $1,000 pump—which is unaffordable for many.

Since then dangerous cost-cutting trends among health insurers signal decreasing support for breastfeeding. On April 1, Anthem health insurance which covers 40 million people in 15 states, cut its breast pump reimbursement rate by 44% to just $95, leaving millions of moms with only lower-quality options. “After the 2014 hack-a-thon, we heard from over 1,000 women that we had to move beyond the pump, and that women need paid family leave, more supportive environments and quality postpartum care,” says Catherine D’Ignazio, assistant professor at Emerson College and Director of the Project. “These gaps represent tremendous opportunities for innovation in technology, products and services.”Those gaps also often fall harder along socio-economic and racial lines. For over 40 years, breastfeeding rates of black women have lagged behind those of their white peers. Those disparities impact infant and maternal health outcomes. So the organizers made an “intentional focus on equity this year and sourcing solutions from the community,” D’Ignazio says.

That translates to examining other barriers, including economic ones.  “Indigenous women already make much less than white men no matter their education. If we are underpaid, we are likely overworked and can dedicate less time to breastfeeding and pumping,” Lorenzo says. “We need more support models that are rooted in community knowledge,” says Anjanette Davenport Hatter, executive director of Detroit-based Harambee Care, which provides high quality in-home maternal and infant care coordination for Medicaid eligible families. Davenport Hatter leads a Detroit team that is developing a self-advocacy breastfeeding tool to increase local lactation support and education.

Further, a team from Tupelo, Mississippi, spearheaded by Toni Hill of the Northeast Mississippi Birthing Project, is hacking the lack of culturally competent care with a plan to identify women in the community, train them with evidenced-based information, and employ them as community health workers focused on birth and breastfeeding equity. The fourth group of community innovators are from Boston, where they are opening the first free-standing birth clinic in Dorchester, Massachusetts, called the Neighborhood Birth Center.

More traditional hackathon teams are working to create “smart” breast pumps with built-in milk tracking, and developing tele-health services for nursing moms to get just-in-time advice. “Parents want smart products,” explains project manager Becky Michelson, “One team is even working on voice interfaces so a mom can ask a smart device ‘How long can I store my breastmilk in the fridge?’” There’s also an app, called the ‘Yelp for the health equity movement,’ designed to rate and review maternity care based on experiences of bias.

Further, this year’s hack-a-thon not only addresses the design of the pump, but also the design of society, illustrated by the new policy track called, The Make Family Leave Not Suck Policy Summit, that is centered on catalyzing action on paid family leave policy.

Organizers and participants alike are hoping the hacking won’t stop when the weekend ends. “I want this project to help start the conversation about breastfeeding, and what it means to us as Pueblo women, as Indigenous women, to reclaim breastfeeding as our tradition,” Lorenzo says.

Kimberly Seals Allers is a writer, author, consultant and internationally recognized advocate for maternal and infant health. She recently founded, Narrative Nation, a non-profit that co-creates narrative-centered, multi-media communication, by people of color for people of color, to catalyze behavioral shifts to eradicate health disparities. Kimberly’s fifth book, The Big Let Down— How Medicine, Big Business and Feminism Undermine Breastfeeding was published by St. Martin’s Press in January 2017. Kimberly is also a Women’s eNews “21 Leaders for the 21st Century” for 2018.