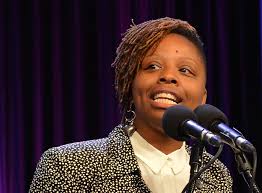 She is an artist. She is an organizer. She is a freedom fighter. She Is Patrisse Cullors, co-founder of Black Lives Matter, and one of Women’s eNews’  21 Leaders for the 21st Century 2018.

It is, in fact, through her recently released NY Times bestseller, When They Call You a Terrorist: A Black Lives Matter Memoir, which she co-wrote with Ashe Bandele, that Cullors makes some of her boldest statements ever about the terror that she, and other Black people, continually face. “I carry the memory of living under terror…knowing that I or any member of my family could be killed with impunity, and yet I was called a terrorist,” she continues. “We the people are not terrorists. I am a survivor.”

Through a poetic memoir and reflection on humanity. Cullors’ book asks us to remember the #BlackLivesMatter protest as one created in the interest of the most vulnerable. Rather than being labeled a threat to America, as some have called them, the founders are actually loving women whose life experiences have led them to seek justice for those victimized by the powerful, and to change the culture that declares innocent black life expendable.

The #BlackLivesMatter movement, in fact, courageously reignited a global conversation around state violence and racism, and harnessed new platforms to inspire a bold movement for change at a time when peace was, and is, continually threatened by growing inequality and injustice.

“We must continue to challenge a country that kills Black people with impunity and #BlackLivesMatter has stood up courageously to some of the most powerful government agencies in this country. I hope this book reinvigorates our work across the globe,” Cullors adds. “I will continue to create, organize, and shut it down until all Black lives matter.”

Please join us as we pay tribute to Patrisse Cullors at the Women’s eNews 21 Leaders for the 21st Century’ Awards Gala in New York City on Monday, May 7. RSVP here.