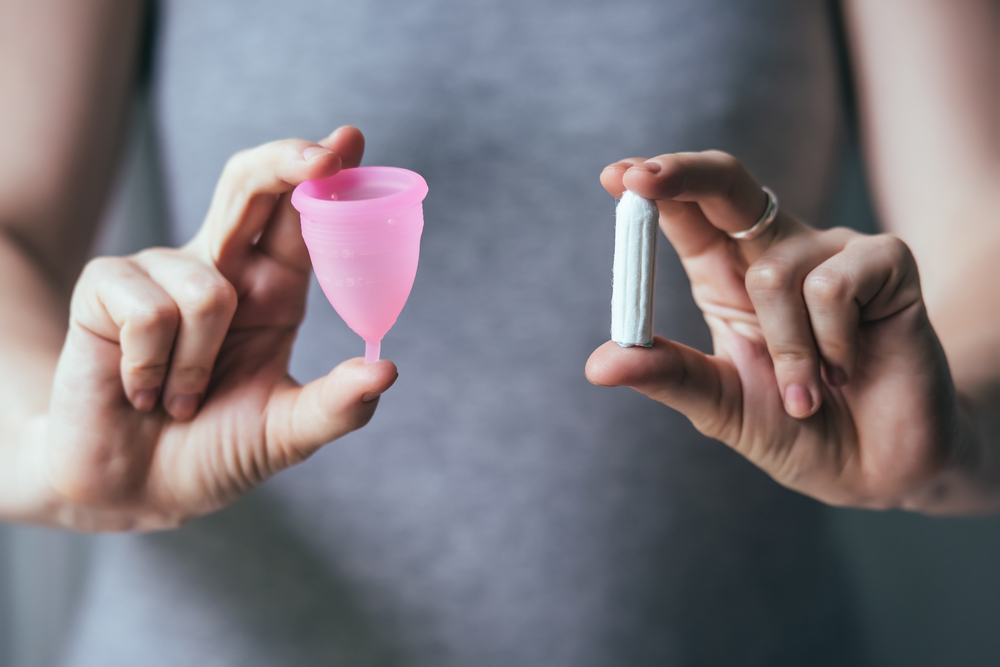 Fortunately, many women, teen girls, and non-binary/transgender people who menstruate are beginning to combat that cost by using more environmentally and economically sustainable period products. Among those in the lineup are Diva and Lunette Cups, Thinx period panties and cloth pads.

Further, with girls entering puberty at an earlier age, they are using technology to learn more about global strides in menstrual health. As a result, with older women loyal to traditional products entering menopause, these alternative products are being primarily targeted to younger people who menstruate, and it’s working.

One of the foremost benefits of reusable products, such as the popular menstrual cup, is becoming increasing appealing to environmentally conscious teens. “I bought a menstrual cup when I was doing a lot of research about choices that would reduce my carbon footprint,” says 17-year-old Ethel Mendius. “In the past year, I’ve cut down on so much paper and plastic waste, not to mention trips to the store.”

Menstrual cups can also be an attractive option due to the health and comfort benefits they provide. Cups don’t contain toxins found in cotton used in tampons and sanitary pads. Further, they provide athletes greater freedom of movement and less anxiety about leakage, and are travel efficient since carrying one silicone cup requires much less space than a fleet of pads, tampons, or panty liners. On the whole, “It’s just less upkeep, and it’s easier,” says Christina Elejalde, age 17. The Randolph, New Jersey teen recognizes that “the idea of reusing a silicone cup” can “sound really disgusting,” inciting inhibition in many of her peers. Still, Elejalde feels that her Diva Cup has helped her learn more about her own body, and anticipates that other teens may experience the similar feelings.

Additionally, reusable period products can prove to be a far cheaper alternative to their traditional disposable counterparts. Elejalde points out that the monthly cost of pads and tampons essentially adds “another bill” to the lives of all women, and that it takes the biggest toll on low income women. In comparison, while the cost of a menstrual cup is initially equivalent to five to six boxes of tampons, the long-term cost savings are significant. “Although the initial purchase is an investment, you end up saving so much in the long run,” adds Ana Tobio, a student at Colgate University, “And they aren’t any more time consuming or inconvenient than traditional items”.

For women at a lower socioeconomic level, the lower long-term cost savings can prove even more crucial since the monthly investment in traditional feminine hygiene products is not covered by food stamps. Almost 40 million women in the U.S. currently live in poverty or on the brink of it, so when presented with the choice of spending their last few dollars on menstrual products or food, many feel forced to neglect their menstrual health. Further, young girls who may not be able to afford pads or tampons often miss school each month because of their periods.

The price of menstruation is only exacerbated by the “tampon tax,” which many legislators and advocates like Jennifer Weiss-Wolf are now locked in a bloody battle to eradicate. Under current U.S. law, feminine hygiene products aren’t categorized as a necessity and are therefore not exempt from sales tax. The reality, however, is that they are a basic human right,  designated as such by the United Nations in 2013.

Clearly, the shift towards economic and environmental sustainability in menstrual products is part of a larger movement by a younger generation to normalize periods and eliminate the shameful stigma that shrouds them. This is a positive sign for everyone, particularly for those women and girls who struggle economically.

One thought on “Teen Voices: Take That, Tampon Tax!”