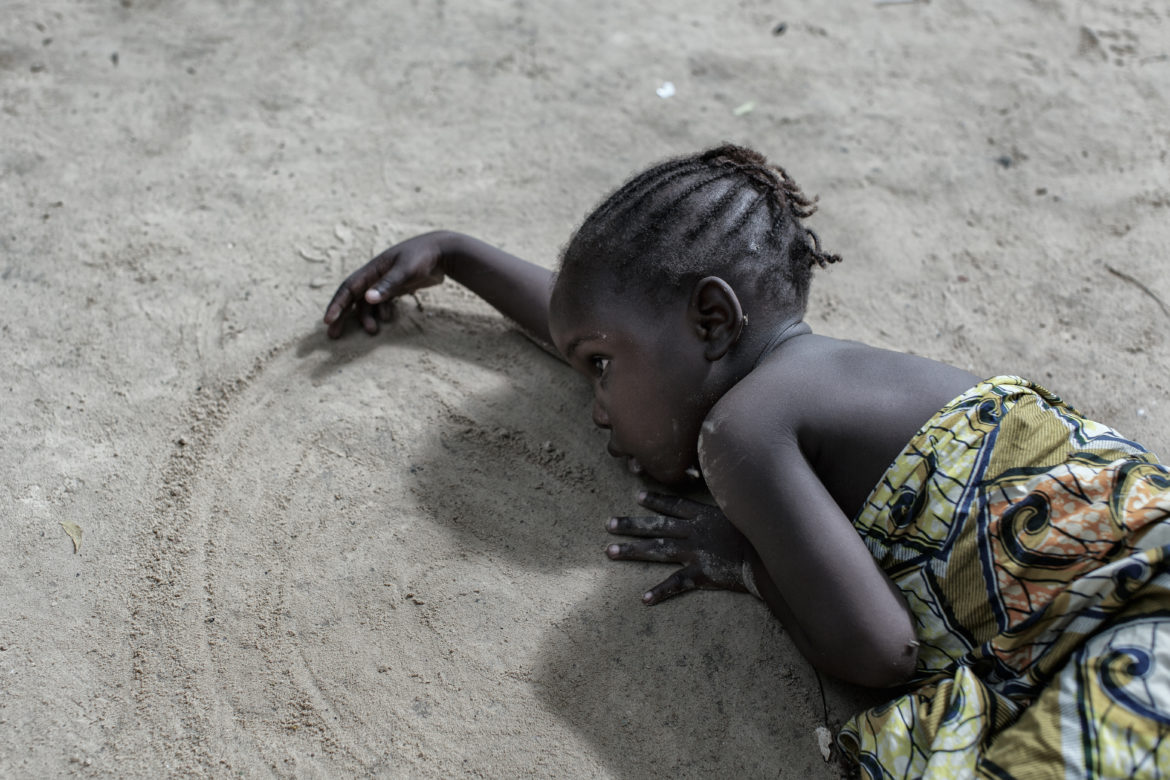 “Stepping Out from the Shadows” marks the second installment of stories from around the world by peacebuilding organization International Alert. The following tales of capture, escape and continued hardship, as well as determination, love and forgiveness, are showcased in this series of portraits by award-winning photojournalist Carol Allen-Storey.

Since the start of the Boko Haram insurgency, approximately 8,000 women and girls, as well as many boys, have been abducted in Nigeria. Tragically, girls that escape or are rescued face stigma from their own communities, families and husbands, who fear they may have been radicalized. This places them at risk of rejection, isolation and poverty. A girls herds chickens in a displacement camp in Maiduguri.

Barely a decade ago, Maiduguri in Northeast Nigeria was a thriving city and trade hub. People of different faiths lived peacefully side by side. Since invasion by the insurgency group Boko Haram in 2009, the city lies in near ruins, its surrounding villages pillaged. Hundreds of thousands of women, men and children have been displaced, kidnapped or forced to join the insurgency.

People fleeing the villages around Maiduguri fill the displacement camps located around the city. It is estimated that 2.1 million people have been displaced by the insurgency of Boko Haram. A converted classroom serves as a dormitory for a displaced family in Maiduguri.

The living conditions in a displacement camp are extremely crowded. A dormitory can typically house several families. Government and humanitarian agencies cater to basic needs such as food, health, shelter and clothing, but these are limited.

Women and girls returning from Boko Haram can be especially vulnerable in this setting. They are labeled “Boko Haram Wives” or annoba (epidemics), as community members fear they may have been indoctrinated in captivity.

Isolated and ostracized, these women and girls face dire poverty and some are even forced into prostitution to feed their children. A project ran by charities International Alert and UNICEF is helping them rebuild their lives through trauma, healing and dialogue. When Boko Haram invaded her village, Jummai ran away with her sister and children. The insurgents found them, raped Jummai in front of her children, and left. Afraid the insurgents would come back, the women decided to run. After walking for 60 miles with their children strapped to their backs, the women reached a crowded displacement camp. There, Jummai discovered she was pregnant with twins.

“The issue of being raped and carrying a baby from sexual violence, the stigma, the isolation from suspicious people in the camp – it was emotionally overwhelming. The dialogue sessions helped me cope with the loss of my husband and the impact of rape. As for my twins, I love them as my other children. They are innocent.” Boko Haram kidnapped Yagana the day she was visiting her mother in a hospital. She was kept in a crowded room with other women, and only allowed to leave to attend Islamic classes. When she refused to wear the burqa, she was beaten and isolated from the other women. Months later, she was rescued by the Nigerian army and faced a rigorous screening process to ensure she had not been radicalized. One day, she found a little orphaned boy whose parents had been killed. Yagana adopted him and they now live together in a displacement camp.

“In the camp, women used to whisper and gossip about us. They called us Boko Haram Wives. A woman who refused to trust us beat one of my close friends.” In a culture where stigma around sexual violence runs deep, husbands may not be willing to take their wives back and may divorce them on their return from captivity. Dialogue sessions can encourage greater compassion for the suffering of returning women and girls, and help reunite husbands and wives.

Sani and his wife Fatima were separated when Boko Haram invaded their village. When Fatima was rescued from captivity, she was so emaciated that her husband could not recognize her.

“I didn’t want to re-take my wife when she first arrived. A few months later I was attending a dialogue session. Many of the men said that they had accepted their wives back and why shouldn’t I? The discussions helped me change my mind. I knew I was still in love with her.” When Ladi’s husband joined Boko Haram, she refused to follow him. He became abusive, repeatedly beating and raping her. In defiance, Ladi decided to run. She walked for six days before reaching a displacement camp.

“When I first arrived in the camp, I was labeled a “Boko Haram Wife” with a dark soul. They thought I was wicked, evil. I was sad and lost in thought of my time in misery. The woman that ran the workshop was very nurturing, like a mother. She treated me as if I was her daughter, her family. Now when I feel low, I just visit one of the women from the workshop.” Kubili was abducted with four other girls. They were kept with a woman that was a Boko Haram Wife, as her personal slaves. After three weeks, the insurgents came to pick a girl to marry. The girls decided to risk their lives and escape. After walking for two days, Kubili reached her village. There, she found out her brother was killed – in revenge for her family being unable to pay ransom to her captors. Today, she lives with her mother in one of the few Christian displacement camps in Maiduguri.

“I wish I could return to my village and go to school. My dream is to be a nurse and help people. The only thing that keeps me sane is the fact that I have some friends from the village who are also still here in the camp. We sit and talk a lot. If a former Boko Haram insurgent repented and came to live in the community, I would forgive him. I believe you shouldn’t be focused on revenge. Treat with kindness whoever treats you with cruelty.” In the community, religious leaders of all faiths can be the most accepting of women and girls returning from captivity. They council husbands to not divorce their wives, and they can be great ambassadors for changing attitudes towards survivors. Abdulrahman, a Muslim cleric, uses verses from the Quran to preach compassion toward survivors of Boko Haram.

“In the camp, I knew I needed to talk to people about forgiveness. Everyone in the camp had shared problems, they were ousted from their homes, savaged by the insurgents. Since the program started, people have become more calm and accepting of the past and are keen to move on. The program brings us all together.”

In this exciting new monthly series from peace-building organization NGO International Alert, we explore how achieving peace exists within our collective power. Through a new article each month, we profile peacemakers around the world, from the stigmatized women and girls who escaped from Boko Haram in Nigeria, to those tackling sexual and gender-based violence in areas like Pakistan and Tajikistan.