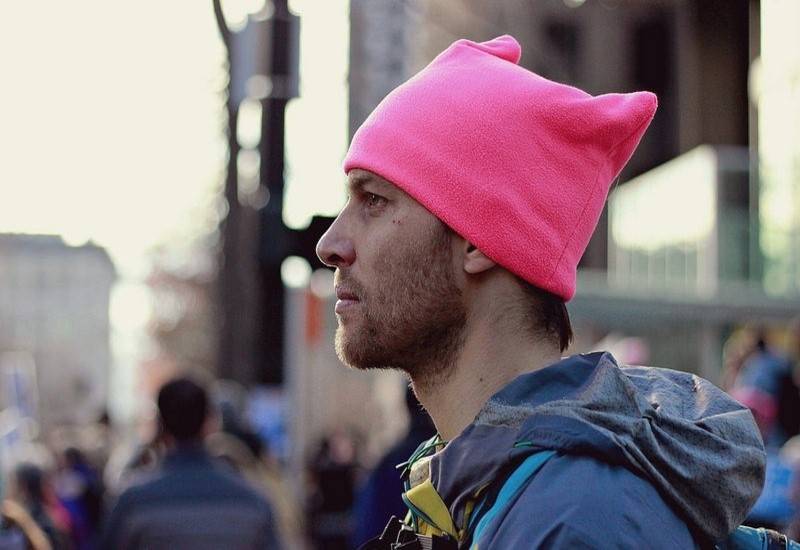 (WOMENSENEWS)—With Father’s Day fast approaching, it’s an appropriate time to remember that the man occupying the White House represents among the worst expressions of manhood the U.S. has ever seen. That dangerous truth is being obscured by so many of Donald Trump’s other treacherous actions.

Millions of words have been written excoriating the questionably elected president on a host of topics—from denying climate change to undermining minority voting rights; from restricting women’s reproductive rights to promoting harsh prison sentences for nonviolent offenders. Often absent in this blizzard of assaults on social progress is the predator in chief’s misogyny.

A virtual sea of pink pussy hats liberally dotted the heads of nearly 6 million women worldwide protesting Trump the day after his inauguration. Men, happily, were at the protests in significant numbers. But since then, where have the men been? Beyond a campaign a small number of colleagues and I organized in February, calling on Trump to prove “nobody respects women more than [he does],” men as a group have been largely silent. This has to change.

Father’s Day is a time to for men to step up again and also to consider what a male role model for our children and grandchildren looks like. It’s the opposite of Trump. Sad.

Before the election, a dozen women came forward to charge Trump with sexual misconduct. Trump pledged to sue them all after the election. It’s one of the many promises he has not kept. Lest their names are not forgotten, I want to remember them here: Jessica Leeds, Ivana Trump, Kristin Anderson, Jane Doe, Temple Taggart, Cathy Heller, Karena Virginia, Mindy McGillivray, Natasha Stoynoff, Jessica Drake, Rachel Crooks, Summer Zervos, Cassandra Searles. These are brave women who are to be commended for speaking truth to power.

Consider this: In a sworn affidavit, Trump’s ex-wife, Ivana Trump, accused him of rape in 1991. In a subsequent deposition in connection with their divorce—while not backing away from her charge that her then-husband had “raped” her—she said she didn’t want to be interpreted in “a literal or criminal sense,” even as she added, “As a woman, I felt violated.” It’s widely believed she downplayed her charge to not jeopardize their divorce settlement in which she received $14 million in cash.

As for the president? He’s never denied sexually assaulting women, a fact he boasted about it on the infamous “Hollywood Access” tape where he said, “When you’re a star they let you do it. You can do anything.” His defense? His comments were nothing more than “locker room” talk.

A Challenge for Men

Given that, a simple question—a challenge, actually—for men is: Why are we not standing up and speaking out that as men—sons, brothers, uncles, husbands, fathers, grandfathers—we unequivocally reject his denigrating behavior toward women?

Those of us who are fathers, grandfathers, or even in mentor, coach or clergy roles, need to explicitly reject Trump’s misogyny, which his administration’s policies and a Republican-majority Congress are promoting. Otherwise, by our silence, aren’t we normalizing his behavior? To advance women’s rights, men must join women on the frontlines: for reproductive rights, for earning a 100 cents—not 79 cents—on the dollar, for child care, family leave, nutrition assistance and adding (not cutting) after-school programs, among a myriad of programs in jeopardy.

We face many crises in the world today, from the health of the climate to the health of the Constitution. However, when it comes to advancing gender equality and justice, men have a singular role to play: modeling a sensitive, aware manhood, not what’s being expressed at the White House.

Let’s start by asking women and women’s organizations how we can support them—and really listening to what they have to say. Then, let’s talk with other men about how we want to make our voices heard. The man in the White House is the most visible exemplar of men behaving atrociously but, unfortunately, he is not alone. If men want to prevent his minions from feeling emboldened, it is up to us to say yes to a compassionate, nurturing expression of manhood. Our children and grandchildren deserve nothing less.