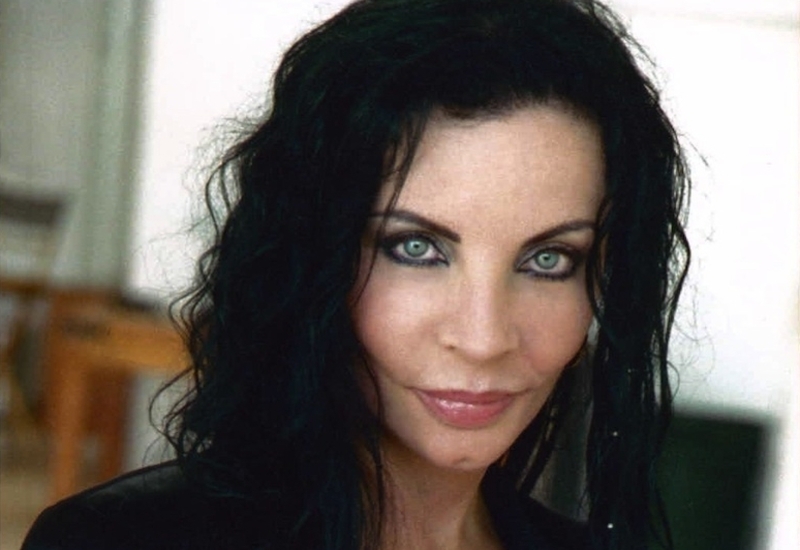 From her organization, the Loreen Arbus Foundation, to her long list of other philanthropic work, Arbus has committed herself to girls, women and those with disabilities. The latest in the series “My Passion, My Philanthropy.”

(WOMENSENEWS)—If there is a single through-line in my life and in my philanthropy, it is marginalization. It has been with me from my earliest memory, and it has defined the many causes to which I have committed myself – most particularly girls, women and those with disabilities.

My father, Leonard H. Goldenson, was the founder and chair of what is today the world’s largest media empire, Disney-ABC Television Group. He was a man of very significant influence, and in many ways, our family led a life of privilege. But my older sister, Cookie, was born with cerebral palsy, and that difference led to our family often being marginalized. My friends’ mothers wouldn’t allow them to come to my house to play because of my mother’s mental illness and my sister’s disability. And when we traveled, the only lodging we found open to us were Howard Johnson motels, and no restaurants except theirs would seat us.

I also found myself marginalized at school because I was the only Jewish girl in an Episcopalian school. Despite being one of the best dancers in the school, who would go on to dance and choreograph Argentine tango professionally all over the world, I was placed in the back row for dance performances.

But while difference was defining for me as I grew up, it was not confining. I learned joy (and so much more) from Cookie. I discovered unconditional love from Karen Hansen, Cookie’s lifelong caretaker. And even at the school where I confronted so much discrimination, the principal began to take a special interest in me. She saw my potential, despite the fact that I was such an angry person, a bully, driven by my internalized anger to do almost anything for attention, for revenge. At a time in my life where there was tension both at home and in my education, she literally and spiritually gave me a great gift: the gift of space. For one year, I had a standing appointment in her office. My rebelliousness was constructively channeled, and I went on to become editor in chief of the school’s magazine and president of my senior class.

I entered adulthood from both a world of privilege and a world of challenge. Having grown up immersed in television, I wanted a career in that field. But I didn’t want to ride on my father’s coattails. I changed my last name to my maternal grandmother’s name, Arbus, before I became a teenager.

With that name, with the knowledge I’d absorbed through my father’s profession and with a measure of moxie, I went to work. Television had always been a man’s world. Women worked at lower levels (often with genius ideas for which their bosses took credit) and, of course, fetched the coffee. I wanted much more than that.

In the beginning I was the object of the prevalent patronizing attitudes of the industry. But in time I worked my way to leadership. I became the first woman to head programming for a major television network, at Showtime, and then I did it again, at Lifetime! It was gratifying to be a pioneer in my own way. And, of course, I sought to bring women along with me. Whether placing shows on a network schedule or, later, producing Emmy-nominated programs on my own, I remained mindful of the fact that difference was recognized as a problem, not as simply another indicator of distinction, of individuality, one of many facets of a person.  After all, our common humanity is larger than any difference, whether inborn or acquired.

In time my father’s career and my mother’s ideas created the opportunity for my parents to step into the world of philanthropy. Though my sister Cookie died far too young, the imprint of her life will be with us always. My parents wanted her legacy, and theirs, to be the transformation of society for people with disabilities. My dad, and my mother, Isabelle, took the lead in founding one of the largest health agencies in the U.S., United Cerebral Palsy, an organization serving individuals with cerebral palsy and other disabilities, as well as a research and education foundation responsible for numerous medical breakthroughs.

My mother was a trailblazer. She created the concept of the telethon and originated the ideas in Proposition 502 of our Constitution, which federally mandate the inclusion of people with disabilities – wheelchair-accessible sidewalks, wheelchair-accessible public bathroom stalls, accessible public telephones, handicapped-only parking spaces, etc. Her ideas preceded by fully 15 years the landmark legislation, the Americans with Disabilities Act of 1988. Most people do not realize the largest minority group in the US and the world is people with disabilities. The fact is, the aging of the baby boomer generation, the return of our women and men from the devastation of war and fertility drugs and multiple births have resulted in more disability, as has our increased ability to keep preemies alive.

At the youngest age, I donated my earnings from chores. In time I began work as a philanthropist in my own right, and advancing the cause of people with disabilities was a natural place to start. Through my Loreen Arbus Foundation, I have sought to find ways to make a difference and empower those with disabilities, and to educate people in the hope that they would recognize the absurdity of intolerance.

One idea that is central to me is that people are afraid of the unknown and of differences, and that fear is at the root of discrimination. A maxim I always come back to is, “You cannot be what you cannot see,” and this drives my efforts to increase accessibility and to create role models.

I have established many scholarships given to students, researchers and activists whose work sheds light on people living with disabilities, including filmmaker grants at the College Emmys, the Alliance for Women in Media’s Gracies, Women in Communications and the New York Women in Film & Television Muse Awards. Following my parents’ legacy, I founded and chaired the annual Women Who Care Luncheon, which has not only raised over 10 million dollars for the crucial work of United Cerebral Palsy of New York City, but became a high profile New York tradition that generated global media attention on the subject and stories of those with disabilities. I co-founded the Media Access Office, in partnership with the California Governor’s Committee, to increase employment, improve depiction and raise consciousness regarding disability. And as a result of my suggestion to a young and up-and-coming designer, she presented the very first runway show at New York Fashion Week featuring a model in a wheelchair.

A year ago, I announced a two-year Commitment to Action with the Clinton Global Initiative. Lights! Cameras! Access! 2.0 addresses the under-representation of people with disabilities in media. With my partner Tari Hartman Squire, we are hosting and producing Think Tanks and “Call to Action” Summits in New York, Los Angeles and other cities, which aim to improve disability portrayals on large, small and personal screens, generate employment of civilians and veterans with disabilities in front of the camera and behind the scenes and increase accessible entertainment for audiences with a variety of disabilities.

In 2017, I am proud to be the lead sponsor of Americans for the Arts’ National Initiative for Arts and Health in the Military’s 4th National Summit: Reintegration & Resilience, which will examine the role of arts in recovery, transition and transformation across the military continuum, bringing together a cross-sector group of 250 leaders, practitioners, artists and advocates who support greater access to the arts and creative arts therapies for the military and veteran populations.

The Potential of Media

Coming from a background so steeped in television, it has long been clear to me that one of the most critical ways the world can change is by what we experience through the media. Both the media and philanthropy hold the potential to end intolerance that creates an “us vs. them” environment, to create a society defined by inclusiveness.

As such, it has been my great honor and pleasure to work with Jane Fonda, Robin Morgan and Gloria Steinem, the founders of the Women’s Media Center, which seeks to make women visible and powerful in the media. I am a co-chair and sponsor of the Women’s Media Awards, among other projects. Most recently, I was gratified to fund a new effort by the Women’s Media Center designed to advance the careers of female journalists who have some form of disability: the WMC Loreen Arbus Journalism Program. It supports the research and writing of 12 original journalism explorations annually, focusing on different aspects of crucial issues affecting women with disabilities and thereby raising the media presence, voice, advocacy and experiences of differently abled women. It is presented across Women’s Media Center’s content channels: WMC Features, WMC Women Under Siege Project, WMC FBomb and WMC Speech Project.

New voices, those of women with disability, are now being heard. To date, six stories have been conceived, assigned, written, edited, posted and distributed to over 27,000 WMC subscribers, to 129,000 Twitter followers and to 112,000 Facebook fans, including articles such as Kathleen Downs’ “The Power of Holding Hands,” which examines the power of touch for a woman with disability; Elsa Sjunneson-Henry’s article “Switched at Birth” Breaks the Mold in Depiction of Deaf Characters”; and Priyali Sur’s article “Disability: A Major Hurdle on the Migration Route for Women Refugees,” among other powerful stories.

It has long been a reality that women aren’t taken seriously. I am passionate about helping women grow in recognition, confidence and strength. Towards that end, I was co-founder and, for seven years, co-chair of the Lucy Awards for Women In Film; part of the core group of founders of the Los Angeles Donor Circle of The Women’s Foundation of California; and founder and chair of Women In Film International, among others. For over two decades I’ve co-hosted a monthly luncheon for prominent, high-level women in communications. To date, over 15,000 women who represent various facets of the entertainment industry—including but not limited to television, film, print, public relations, music, new media, as well as philanthropy—participate in highly stimulating conversations, which evolve into open and provocative discussions about culture and issues that impact the daily lives of women in the industry.

Women’s eNews is an organization I am very proud to be involved with, and so I am delighted to support Girl Fuse. It is an editorial initiative, through Teen Voices at Women’s eNews, for girls with physical disabilities. I introduced Danielle Sheypuk, psychologist, activist and wheelchair-user, to Women’s eNews, and together they have been developing a series of journalistic articles and first person essays by and about girls with disabilities, combating stereotypes and authentically portraying their life experiences, such as this Seat at the Table interview.

As the election year of 2016 unfolded, the world watched the first woman nominated by a major party campaigning to become the next president of the United States. The misogyny that characterized this election year has only galvanized my deep desire to create a truly just and inclusive world. As America faces a highly uncertain future, particularly for those who experience discrimination, I urge you to remember something Hillary Clinton said in her nominee’s acceptance speech last July, which speaks a truth that applies to all forms of marginalization: “When a barrier falls for one, it clears the way for all.” 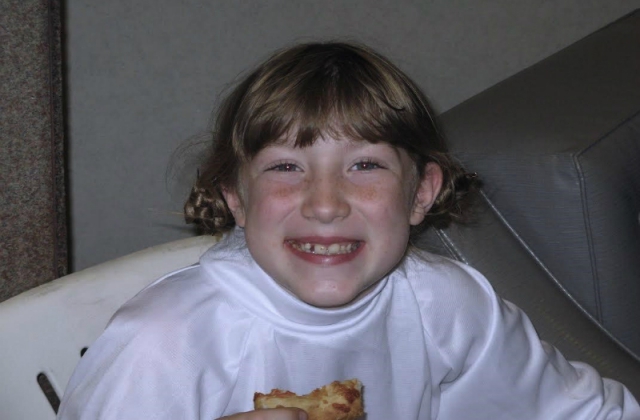 Teen Longed to be ‘Star Wars’ Rey, Settled for Leia 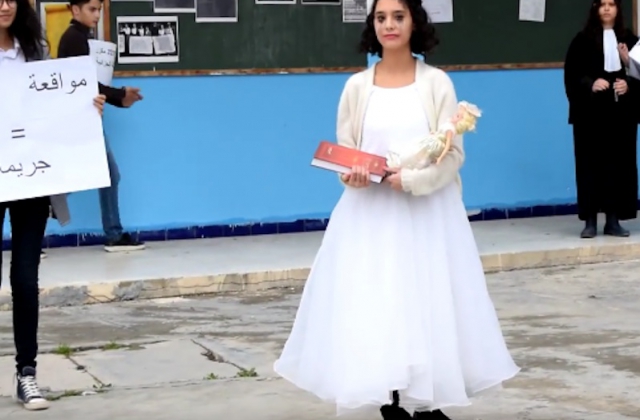