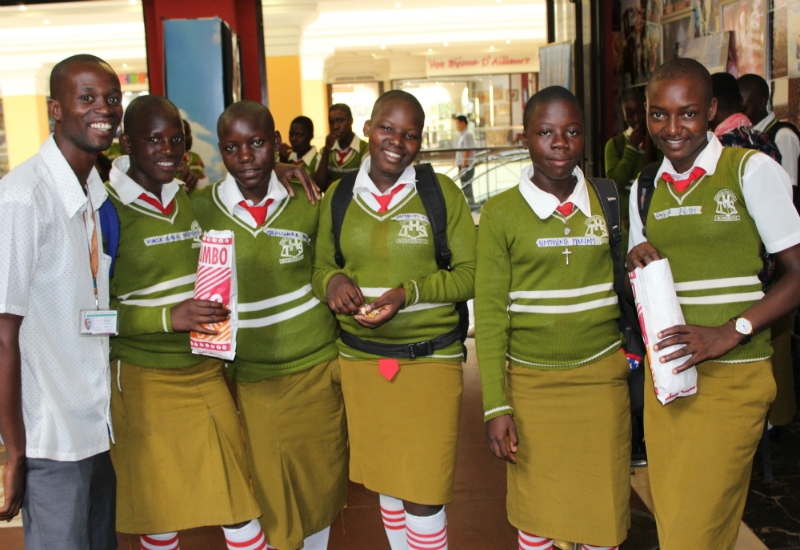 Recently we took a class trip to see the Disney film “Queen of Katwe.” For many Teen Voices readers this may seem like an ordinary thing, but for us it was remarkable.The day held so many firsts:

* The first trip to Kampala, which is 145 kilometers (90 miles) and is a city compared to the villages where we all live.

* The first time going to a cinema.

* The first time using a toilet. All of us use a pit latrine at home and at school. These are essentially holes in the ground so the toilet was a whole new experience.

* The first time seeing a tea plantation, a sugar plantation, the Mabira forest, Lake Victoria and the Nile river.

Some things were less exciting – like being part of a traffic jam. And the jury is still out on if our first time in an elevator was a positive or negative experience. Some of the girls thought we were going to die being in such a small box that moved by itself.

After the three hour journey we arrived to the cinema. We were all surprised about how the place looked. Ruth asked Patsy,  “Have we reached heaven?” Patsy said no, “This place just shines like a morning star like that.”

Everything was so new and so exciting. The movie theater was so dark it made some us scared enough to forget our joy, but once the movie started all of that went away. “Queen of Katwe” is a true story about a Ugandan girl named Phiona who turns out to be the best chess player worldwide after having a miserable and sorrowful background.

It felt good to see a Ugandan girl become a national hero and celebrity. We hadn’t heard of her story before the movie but we left the theater hopeful that we could achieve our dreams. Disney did a good job representing what real life is like in Uganda. Many girls live like Phiona and it was remarkable to have our life replicated on a big screen.

Even several weeks after the movie, we often think about Phiona and her rise in Uganda. She gives us hope that if we are patient and work hard there is a path to success and happiness for us.  We long for our next journey.

Maria Natasha Kyasa is a teen member of Women in Leadership - Uganda.

Patsy Kisakye, 15, is a participant of WIL-Uganda and a student at Townside High School.

Ruth Kagoye is a teen member of Women in Leadership - Uganda.

Zahara Li Nakisige is a teen member of Women in Leadership - Uganda.