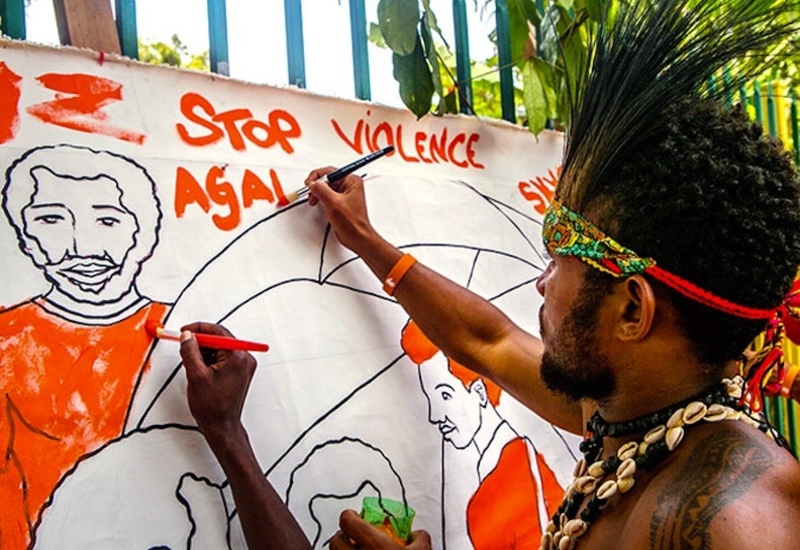 An event attendee colors a banner at an "Orange the World" event at Gerehu Market in Papua New Guinea.

(WOMENSENEWS)–As a 20-something, I spent the last night of my first live-in relationship locked in my car, trying to stay warm and awake. A typical argument with my partner escalated. I had learned to read the tightening in his jaws and shoulders as indicators that physical violence was coming. Before he could lunge at me, I was out the door and into the car. I had had enough. I was luckier than most women because I had a car, job, credit card and bank account that made leaving possible.

For me, the physical violence in my relationship evoked too many painful memories of my childhood.  One of my earliest memories is of a large crashing sound waking me up. My father had thrown a large glass bowl at my mother and it broke through the plasterboard.

In my memory, it came through the wall into my room. This incident precipitated sleeping problems, nightmares and night terrors that I have had for my whole life. A light sleeper, I jump from bed at slight noises ready to hide or flee.

My family life was filled with violence. My sister and I were ever vigilant, gauging the tension when we came home from school, the anger level at dinner and how much alcohol was consumed so that we could protect ourselves. Often if my step-father had been drinking all day, I would slip quietly through the back door, down the stairs and into my room.

Now imagine my story multiplied by nearly 5 million U.S. children who are exposed to intimate partner violence each year, with 4.4 million witnessing this violence in their families.

Globally, the U.N. estimates 35 percent of women have experienced physical and/or sexual violence in their lives.

This is why the United Nations’ theme for this year’s 16 Days of Activism Against Gender-Based Violence was #orangetheworld. Orange was chosen by U.N. Undersecretary General Phumzile-Mlambo and her colleagues to symbolize a brighter future without violence.

This annual campaign, which ends on International Human Rights Day each year on Dec. 10, makes a big difference. It aims to build public awareness about violence against women through marches and rallies, raising money for programs and services for victims of violence and, this year, oranging public buildings and spaces.

Awareness is a must for much-needed change. Although the U.N. Declaration on the Elimination of Violence against Women was signed 23 years ago, the international statistics are staggering. Here are some to consider:

In the United States the figures are similar, as 30 percent of women have been physically abused by an intimate partner and only one third of these women receive medical treatment for injuries that they experience. Around 20 percent of women here experience sexual assault in their lives, according to the Centers for Disease Control and Prevention.

Behind each of these statistics is a story of fear and harm.

Besides international campaigns such as the recent U.N. one, what you can do to raise awareness? There are lots of options, such as:

The world I want to pass on to my daughters and grandchildren is one without violence against women, one that’s different than what I’ve experienced in the past. It will take more than 16 days of activism each year to accomplish this, but we can take steps each day to make a more peaceful world.

Patricia MacCorquodale is a professor of gender and women’s studies at the University of Arizona and a Tucson Public Voices Fellow with the Op-Ed Project. Her research focuses on women’s careers in science, engineering and legal professions, gender and human sexuality and educational aspirations and achievement.