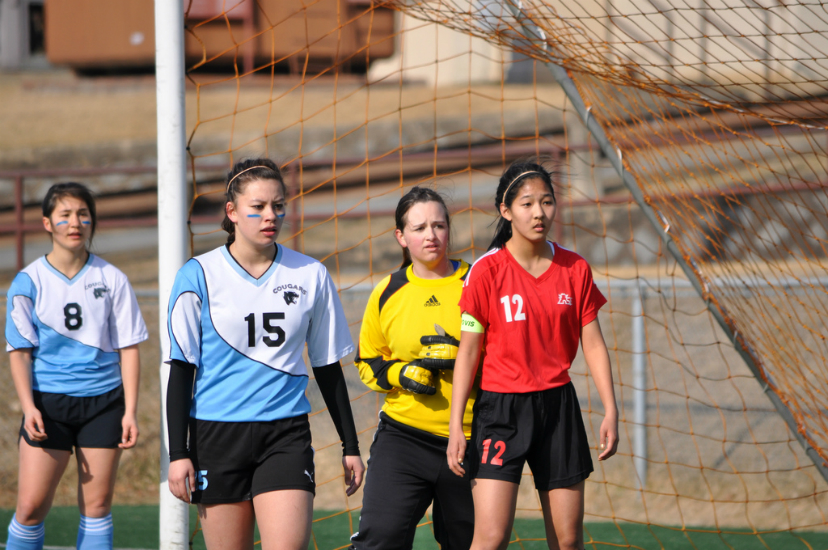 The football players shared the float with Summit’s girls’ soccer team who won their fourth consecutive championship. In the center of the parade downtown, announcers read out the all-male team’s statistics but failed to mention the girls team.

“They got a parade and other teams tagged along,” said Julia Hager, describing how she and her fellow athletes felt during the parade. “We sort of felt displaced, like we weren’t meant to be there,” the defense player said.

While opportunities for male and female athletes at the school are equal as required by federal law Title IX, the girls teams feel they receive less support from the students or community, leaving players feeling inadequate and frustrated.

“When there’s little to no crowd it’s definitely hard,” said Summit soccer captain Anniston Ward, about attendence at games.“Especially when they are very important games and not a lot of people are there you feel unimportant and like people don’t care.”

While girls’ soccer and volleyball at Summit draws crowds comparable to boys’ baseball or basketball, nothing compares to Friday night football. Since Bend has a population of approximately 81,000, it is too small for a professional sports or college team, which contributes to the popularity of high school sports.

“It is clear though that as successful as girls programs are at Summit we get a much smaller amount of recognition, credit and clout then when a boys’ program has success,” said Summit girls soccer coach Jamie Brock.

The imbalance is unavoidable said Summit’s athletic secretary, who is responsible for administrating and coordinating athletics and its surrounding activities, Stacy Hager, the defense player’s mother. “There are certain sporting events that simply draw more crowds than others,” she said. “However, we encourage cross-participation in all of our co-curricular events.”

Summit football coach Chico Fraley argues that despite the greater exposure, the football players lack the athleticism of their female counterparts.“The worst player on the soccer team is a great athlete. Football isn’t as reliable,” said the Summit football coach, who is also a parent of current and graduated Summit female athletes.

Media recognition is equally unbalanced. “In the paper, the football team is favored or given larger articles over girls sports and other fall sports in general,” said junior soccer player Parker Campbell, referring to the town paper, The Bend Bulletin. During the 2015 fall season,  the paper published 23 stories on Summit football during the fall season. Summit girls were the subject of 12.

Football hogs the headlines in Summit’s student newspaper, as well. The team’s big win was covered on the front page of the Pinnacle with a photo. The girls’ big win was relegated to the Sports section.

“Inclusion is an essential aspect of our student publication, and sports writers are oftentimes challenged with having to regulate the amount of attention they are going to decide to bring to each gender individually,” said student Editor in Chief Samantha Short.

“We have recruited more girl sports writers that will, hopefully, add more of a female perspective in the Sports section,” said student News Editor Eliana Alexander.

Soccer players feel a lack of love outside the school doors, as well. From the business owners that celebrate the team on their signs to the attendance at games. “People go with their families, and there’s always a group of kids that go to watch. We don’t get that at soccer games,” said Campbell. Football players “attend our games when they didn’t have practice conflicting, but even then, not all of them came the way we go to their games. They follow the season usually when they have friends on the team, but usually don’t pay much attention if they don’t know anyone.”

Summit junior Mitchell Burton attended almost all of the football games last year but only one soccer game. He said he just prefers football over soccer.

They are counting this will bring spectators to the game. Meanwhile, the Portland Tribune kicked off the school year with an article spotlighting Summit football’s coaching staff.

Quin Fraley is a student journalist in Bend, Oregon.