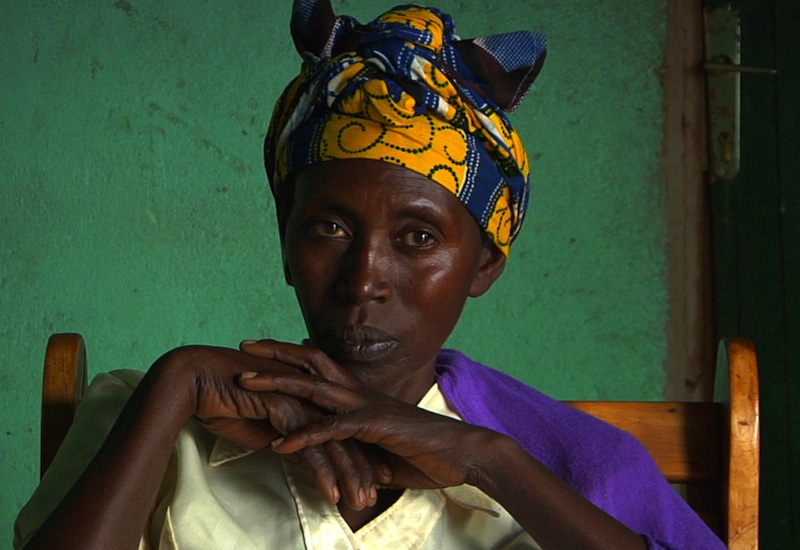 (WOMENSENEWS)—Parts of this story were featured in the documentary “The Uncondemned,” which opens on Oct. 21 across the country and looks at the first trial that prosecuted rape as a war crime and an act of genocide. Victoire Mukambanda, along with other witnesses, testified from behind a curtain during the trial.

I was a farmer in Rwanda when the genocide happened in 1994. Thousands of Tutsis in my commune, Taba, were massacred. When the genocide reached us that April, neighbors attacked my family and destroyed my house. I fled with my baby on my back and my younger sister, who had machete wounds.

We sought refuge in a grassy area in front of the mayor’s office along with dozens of other women and children. We knew that the mayor, Jean-Paul Akayesu, had ordered the killings, but we had nowhere else to go. Over the next weeks, militia members and local residents raped and beat us repeatedly. In despair, we begged Akayesu to kill us because we did not want to live in these conditions anymore. He said he would not “waste bullets on us.”

My youngest baby and I survived the genocide and stayed in the village. My sister, who was also raped, my 1-year-old child and and other families did not make it.

Less than three years later, Akayesu was arrested and put on trial before the International Criminal Tribunal for Rwanda. The court was in Arusha, Tanzania, so I could not see the trial but I followed the proceedings closely on the radio. Near the end of the prosecution’s case, a witness who had been with me in front of the mayor’s office testified that she had seen rapes at the mayor’s office during the genocide. She said Akayesu was there and had to have known about it.  Because of the information she gave them, they were able to add rape to the charges against him.

I decided I would testify about what happened to me at the mayor’s office. I wanted to tell the court, and the world, what happened in my town.  By speaking out, I hoped to restore my dignity and that of other women in my community who had suffered as I had.

When it was time to go to court, I had just given birth to a baby girl and was feverish with malaria.  A nurse came to collect me at my village to take me on a plane to Arusha. It was my first time in an airplane and my first time away from my family. I was afraid to fly and I remember how much it hurt my ears. When I got to Arusha I was put in a safe house with other witnesses.  The night before the trial we prayed that we would speak the truth, say what happened to us and seek justice, not revenge.

Though I had to speak in a foreign court, with foreign judges in robes speaking a foreign language, I was not afraid because when you speak the truth, you have nothing to fear.

At the time, I didn’t know these crimes also happened elsewhere in Rwanda. I only learned later that similar things happened everywhere in the country and that rape is being used as a weapon against young girls and women in other wars too.

I was so relieved when it was over and prayed that my decision to speak out would not be in vain. For months I listened to the radio waiting for a decision, worrying about how the case was going to end.

On Sept. 2, 1998, I found out on the radio that Akayesu was found guilty. When I heard that news I danced. They said it was the first time rape was recognized as a war crime in an international court.

I never imagined my case would provide the legal basis to prosecute others for these crimes around the world. I didn’t know that as the first sexual assault survivor to testify at the Rwandan tribunal, I was helping  to start  a worldwide movement of survivors coming forward, no longer ashamed of what had been done to them.

Yet much still remains to be done.  There are so many others like me – the Yezidi victims of ISIS, the women of San Salvador Atenco in Mexico who were raped by security forces, my neighbors in the Democratic Republic of the Congo who have endured systematic rapes, girls forced into marriage by militants in Mali– who have struggled to find justice and whose voices have not been heard. I hope that my case shows them you can to make a difference, that justice is a possibility.

Back then, when I decided to testify at the mayor’s trial, what I knew was that not speaking out was killing me slowly. By speaking out about it I was able to move forward.

I am proud to say that I am Witness JJ.

One thought on “Rwandan Rape Survivor in ‘The Uncondemned’ Speaks Out”