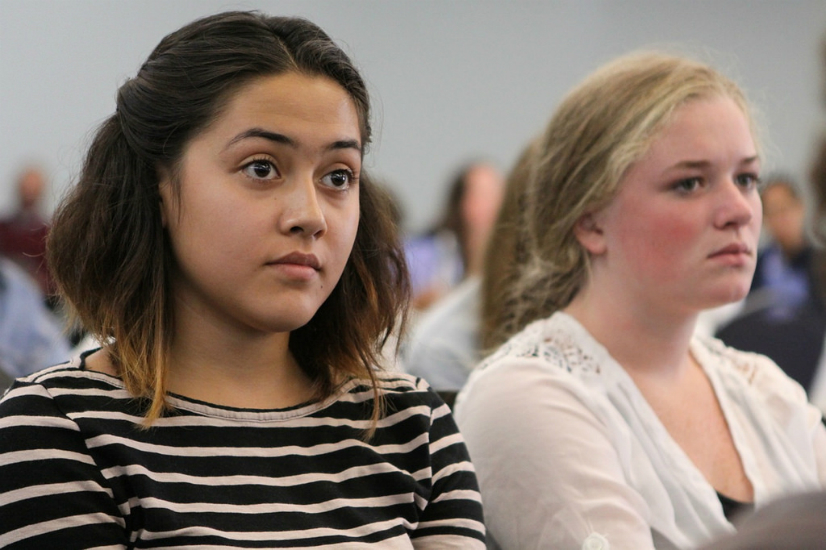 As nearly 10 million girls around the country head into their freshman year of college this month, many will have to contend with living away from home and with strangers for the first time. One of the issues they might have to deal with are prejudices and insecurities (both their own and others) as they navigate living with a roommate, especially one of a different background, during their first taste of independence. Teen Voices talked to six girls in New York, New Jersey and Pennsylvania about the conversations, concerns and thoughts they are having around race and choice of roommates.

Leah McCord, 18
Brooklyn, N.Y.
University at Buffalo
I wanted to room with someone who was black. I got my assignment and the girl’s name was Jennifer, I was upset; I automatically thought the girl was white. I got her contact information and found out she was Mexican. I felt a bit better but I was still hoping for a sister. I really just wanted someone who looked like me — African, African American, Caribbean. I wanted someone that I could relate to. There are things that just one particular race can relate to and then there are things that are relatable regardless of race.

I wouldn’t knock the idea of having a white roommate completely. I feel like I would have to over-explain myself depending on their character. I could have a white roommate, and we could possibly turn out to be best friends, you just never know. I would like to keep it on the safe side and just be with someone who is black. You never know anyone’s mindset and how they were brought up, regardless of race.

I would definitely feel more comfortable with a black person. I don’t wanna have to explain everything I do and say to a white roommate. I didn’t come to college to educate whites on Black history, they have classes for that.

I feel like diversity is a good thing, just in terms of who I would want to live with I would’ve wanted a black roommate.

Monique Brown, 17
Brooklyn, N.Y.
State University of New York at Potsdam
After a texting exchange with her roommate, who has cerebral palsy, where the roommate, wrote: “I tend to talk black, even tho I’m white as all hell,” Brown wrote this note as an open letter that she shared with her friends and Teen Voices: Open letter to my white roommate:

Okay, so here’s the thing: I’m an African American from the city who’ll be rooming with you, a Caucasian American from the country.  It’ll definitely be an adjustment on both our ends, which is why I feel we should be as considerate of the other as possible. I know there are things I am ignorant to as far as your upbringing and disability and there are things you are ignorant to such as my upbringing and race. As roommates I feel we should be able to openly discuss anything so as long as you want to be knowledgeable on the subject, you’re allowed to ask and I’ll answer to the best of my ability. I just ask that you will be mindful of the way you approach the matter.

The comment about talking “black” can be misconstrued as offensive. 1. Talking “white” is generally meant as speaking proper, so talking “black” would be taken as speaking poorly. 2. If you meant by “black,” you speak in broken English or slang, you should know that slang isn’t something that is secluded to a single race but rather usually used in a particular region. Since you’ll be attending school with more people of color than me, I suggest you think before you speak. I told you I’m ignorant to your disability and will probably ask a billion questions and personally, I feel it is best to ask and remain informed.

Lindsay Simmins
Deptford, N.J.
Pennsylvania State University
When it came to finding a roommate one thing in particular that I was worried about was I’d never find one! I wasn’t worried about cultural differences at all. Maybe it is harder finding a roommate as a person of color because of that fear of racism. I’m not too sure. But what I do know is that everyone has their guard up. They don’t know what to expect and they want everything to run smoothly, so fearing racism could really make a roommate search more complex than it sometimes should be.

ShiAnne Mack, 18
Philadelphia
Pennsylvania State University
I chose my roommate randomly. I wasn’t nervous about it because I wanted that experience of having a random roommate and learning to live with them.

I think it is different searching for a roommate being black especially at a big school like Penn State. Most of the time it’s like just trying to find someone who’s the same ethnicity as you so at least there’s one thing in common. There are a lot of places [in Pennsylvania] that don’t have black people or any other ethnicity outside of Philadelphia, Harrisburg and Pittsburgh. I am worried about racism on campus as a POC [person of color], especially because I’ve never really been introduced to racism face-to-face from my peers or people around my age group. Even though I’ve grown up around white people for my whole life, it’s still a little scary.

Akeesha Williams, 18
Brooklyn, N.Y.
Penn State Altoona
I was worried about having white roommates because of our different cultural backgrounds. I have kinky hair. They have straight. They don’t understand inner-city talk or African American personal struggles. And the thought of having a roommate that believes All Lives Matter meanwhile to you Black Lives Matter… Right now, I have one black roommate and two white ones. I don’t know their views but so far they’ve been really cool and down with everything. I think that’s the beauty of attending Penn State.

A lot of the times [white] people want us to look past their skin color, which is understandable, but they don’t seem to understand how big it is to go from being the majority [in a big city] to the minority [on a college campus]; to have to now readjust and be afraid to be yourself because you don’t want the stereotypes that they have about black people tagged on you.

Kirsten Giron
Pittsburgh
Pennsylvania State University
I know that there are cultural differences between my [Asian] roommate and me. I really love exploring different cultures though, so I’m excited to learn about hers.

Unfortunately, I do believe that racism might play a role in choosing a roommate. There are probably people who are racist and pick their roommates based upon that. I think it’s sad that people would use picking a roommate to fuel their hatred.

I think it probably is harder to find a roommate as a person of color because of fear of racism. My step dad told me a story about one of his friends in college when I was waiting to get my room assignment. He said that his friend got a [white] roommate that was extremely racist. When it came time at the end of the year to fill out a survey to find a new roommate, the racist roommate wrote down that he didn’t want a person of color. The following year, the school had him room with a person of color, and the two of them became best friends. I can only imagine how hard it was those first few days or weeks for the roommate of the racist man. For them to become best friends just shows how people need to stop being prejudiced.

Keitha-Clemon Duhaney, 18, is a freshman at Penn State University majoring in psychology.