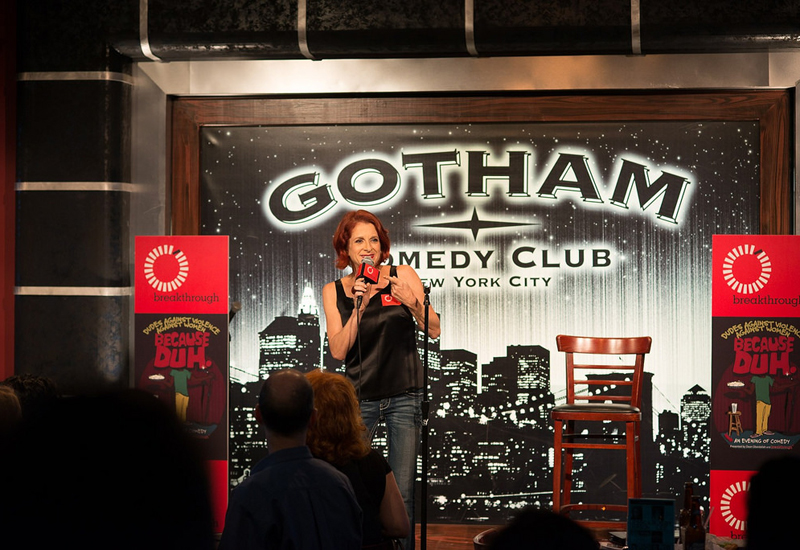 Comedian Lynn Harris at a charity performance for the human rights organization Breakthrough.

LONGWOOD, Fla. (WOMENSENEWS) — Chloe Woodard didn’t know how funny she was until she started using Vine.

The six-second video app gave the 17-year-old from Chicago a stage to practice her jokes and delivery. Until then, she had no way to test her voice. Now, she is part of a creative and comedic community of young women on the app.

“Vine helped me grow from the ground up in the world of comedy by giving me an amazing platform,” Woodard said in an email interview.

It also led her to the VidCon conference, an annual gathering of content creators from all over the world, and Camp Unplug, the first collaborative mini-series on Vine. She sees both as a launch pad if she wants to pursue a career in comedy and acting because they helped “dim my insecurity on my own sense of humor and style of comedy, since it allows me to see the positive reaction from over 650,000 people.” Her Vine followers now number about 782,000.

Vine has given Woodard something rare among aspiring female comedians: a confidence boost. Young women can still be inhibited by stereotypes and social stigmas, like the antiquated, but still operative notion that “women shouldn’t be loud, or challenge things.” Women often face a tendency to be judged more harshly than male comedians.

In response to those hurdles, Lynn Harris, a former stand-up comedian, is launching a program in New York City to help more girls such as Woodard get a foot in the door of an industry that is famous for kicking female performers out.

“I hope to give individual girls the tools they need to be funny or funnier, and what comes with that is confidence, listening and writing skills,” Harris said in a phone interview from her home. “But to develop humor is to develop your persona; whatever comedy or humor appeals to you allows you to better understand who you are. We already know girls are funny, but I love encouraging more girls to pursue comedy because it puts more funny girls into the world.”

Her “GOLD: Comedy for Girls” program starts with a free one-day workshop on Sept. 18 that is designed to empower teen girls in New York to find their voice and command a stage. Harris wants to diversify the comedy scene by giving anyone who identifies as a girl the space she needs to thrive in the comedic craft.

Similar initiatives have been popping up throughout the region; in August alone there were all-girl comedy workshops in North Carolina, New Jersey and Toronto.

Harris said she’s been communicating with investors, but so far the funding for the initial workshop has come from the generosity of those who funded her “small but mighty” Indiegogo. She’s raised $3,469, surpassing her original goal in under two days.

Harris also envisions creating a “virtual femme funny factory,” an online community so girls can encourage each other, collaborate on comedic projects and reach those who cannot make it to the New York-based workshops.

Woodard reflects on the ways a project like this could help. “Being a young girl, I find that I am restricted more in what I feel comfortable saying,” she said. “A man can make a Vine relating to something sexual and be praised, but if I did that I would most likely get an abundance of gross comments. I receive those comments anyway, but to make a Vine directly speaking about something sexual, I unfortunately ‘open myself up,’ so to speak, to these types of comments.”

By some estimates this is a Golden Age for women in comedy, as Tina Fey, Amy Poehler and Jessica Williams, to name a few, shine as comedy queens. But there’s also plenty of backlash as the female “Ghostbusters” remake showed. And the money is missing. Forbes’ list of the top grossing comedians of 2015 is all male.

“When I did stand-up in the ‘90s, I was often the only woman on set,” Harris said. “When a guy does comedy, he just has to prove that he’s funny, but a woman on the mic suddenly represents all women. And there’s the proof. You can’t just look at Amy and Tina and say ‘yeah it’s a great time’ when the young rookie is performing to an empty room. I’d like to help that young rookie.”

Things haven’t changed much for young women trying to break in. Just over 8 percent of headliners at a New York comedy club in the last four years were women, finds a study by bitchmedia.org.

Girls from many parts of New York City, as well as New Jersey, are showing interest in Harris’s first workshop. Eighteen-year-old Naomi Pitt plans to travel to it from her home in Montpelier, Vermont, to learn more about sketch writing, stand-up and improvisation.

In an email, Pitt, who is taking a gap year before college to study comedy, said she is looking forward to getting outside of her comfort zone and benefitting from an atmosphere of collaboration and constructive feedback. She hopes she and the other girls will “strengthen their comedic chops as a group, but also build confidence as individuals.”

“For as long as I can remember I’ve had a love of comedy,” Pitt said. “I used to stay up late watching “Saturday Night Live,” I would re-enact stand-up specials from Comedy Central, and so forth. However, I also used to be really shy, which did not mix well with my desire to perform. I was scared to put myself out there and take risks, so I did not gain much experience in the comedy world. Now I’m ready to explore, and this workshop is the perfect place to do so.”

Brenna Douglas idolized SNL performers too and tapped that energy to hone her comedic voice through theater in her high school in Altamonte Springs, Florida.

Now a freshman at Florida Gulf Coast University in Ft. Lauderdale, Douglas hopes to join a local theater group. She talked about the value of getting comfortable in front of an audience over coffee at Starbucks in Longwood.

“I didn’t have an environment to practice being this funny character in, and while I like to think it came from my natural charm, I essentially had to learn in front of my peers and make all of my mistakes in front of them,” she said.

Elysse Vernon is a freshman at Florida State University and studies English and Communications.