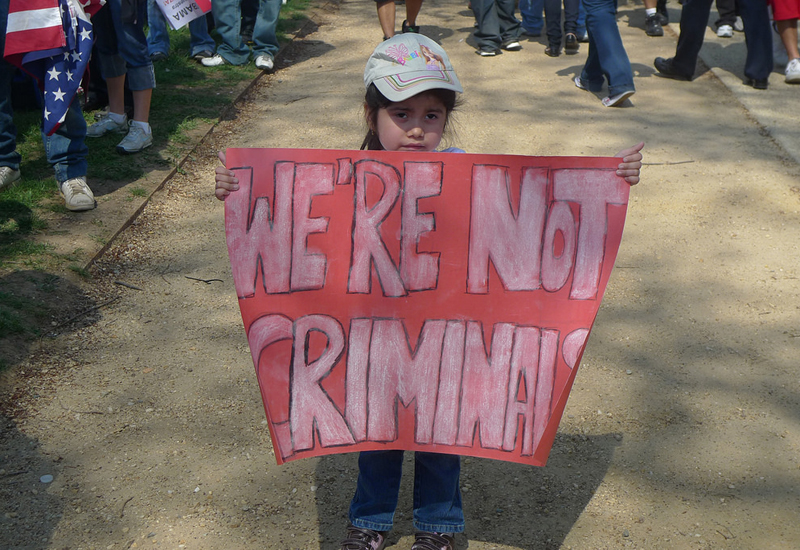 A rally for immigration reform in Washington, D.C.

(WOMENSENEWS)—My aunt Rajana called me from Nepal a year and a half ago to tell me my father had passed away unexpectedly and peacefully. My husband and I quickly made arrangements and took a flight from New York’s JFK airport the next day to join my mother for the 13-day mourning period in Kathmandu.

We were both U.S. permanent residents at the time, so we are among the fortunate immigrants who can leave the U.S. without having to worry about re-entry. We have both since naturalized to become U.S. citizens. But we were not always as lucky.

When my grandmother passed away 15 years earlier, all I could do was cry myself to sleep thousands of miles away. I knew that if I left the U.S., I would not be able to return. I was still on a student visa but I had just graduated from college and did not yet have a job to come back to.

For the millions of immigrants caught in our broken immigration system, family separation is a daily reality. Children celebrate their birthdays without their parents; elderly parents spend their last days waiting for their children to come home.

Last week’s action by the U.S. Supreme Court does even more to damage families facing schisms by immigration.

The Supreme Court upheld a lower court decision from 2015, blocking programs that would have provided temporary and limited immigration relief for families with children who are either U.S. citizens or permanent residents.

The justices’ decision last week against a presidential executive action is disappointing to the millions of families who would have benefitted from these programs as well as to immigration reform advocates.

In response, demonstrators have been taking to the streets this week in Atlanta, Hartford, Connecticut, and Philadelphia.

Immigration officials under the current administration have routinely rounded up immigrants – including those who came to the U.S. fleeing persecution – from the highly publicized Central Americans to the quietly deported South Asians. Outrageous, inhumane behavior by U.S. Immigration and Customs Enforcement officials includes placing deportees in body bags.

The harsh immigration laws threatening to tear families apart impact the physical and mental health of family members. Along with suffering from anxiety, stress and other ill effects, researchers have found children are put at risk of poor educational achievement, with potential long-term consequences.

These family disruptions go beyond undocumented immigrants and mixed-status families in the U.S. Millions of other immigrants with temporary visas, often dependent on their employers for their status, live in limbo without pathways to permanent residency and in fear of losing their immigration status.

They are unable to visit their loved ones abroad or plan for the future. If a family member dies, they will grieve from afar.

Millions of U.S. citizens and permanent residents are also waiting years to be reunited with their loved ones due to visa backlogs. Unmarried children of U.S. citizens in Mexico will wait 20 years. In the Philippines, children can wait 15 years before they can join their parents here. Brothers and sisters of U.S. citizens can wait up to a quarter of a century.

President Barack Obama is unlikely to be able to take action to remedy this immigration setback in the remaining months he has in the office.

However, the fight is not over.

Ana Canenguez is a community leader in Utah who is eligible for one of the immigration programs the Obama administration pushed for, known as Deferred Action for Parents of Americans and Lawful Permanent Residents program, or DAPA.

“Undocumented women like me will keep organizing until our children can go to sleep without worrying that we will be taken away from them during the night,” Canenguez said in a June 23 statement published by We Belong Together, a campaign led by the National Domestic Workers Alliance that mobilizes women behind immigration reform.  “We will keep organizing to protect all of our families.”

This opens an opportunity to move beyond the temporary and limited piecemeal reform and harness the energy to push for a complete overhaul of the broken immigration system.

Advocates are gearing up for the long fight for a permanent solution, beyond the comprehensive immigration reform framework that promises legalization along with increased deportation, border patrol and enforcement.

What we need is an inclusive and humane immigration reform that will offer a clear path to citizenship and family reunification, as well as an end to an inefficient and inhumane detention and deportation system that tears families apart.

In the short term, the electoral focus should be not just on the presidential candidates in the November elections, but to ensure that progressive candidates willing to prioritize immigrant rights will be elected to Congress.

Families like mine and millions of others should not only be able to mourn together, but also to celebrate their lives on the same shores.

Luna Ranjit is executive director of Adhikaar, a social justice organization located in New York that's building the power of Nepali-speaking and other new immigrant communities. She is a Ms. Foundation Public Voices Fellow with The OpEd Project.