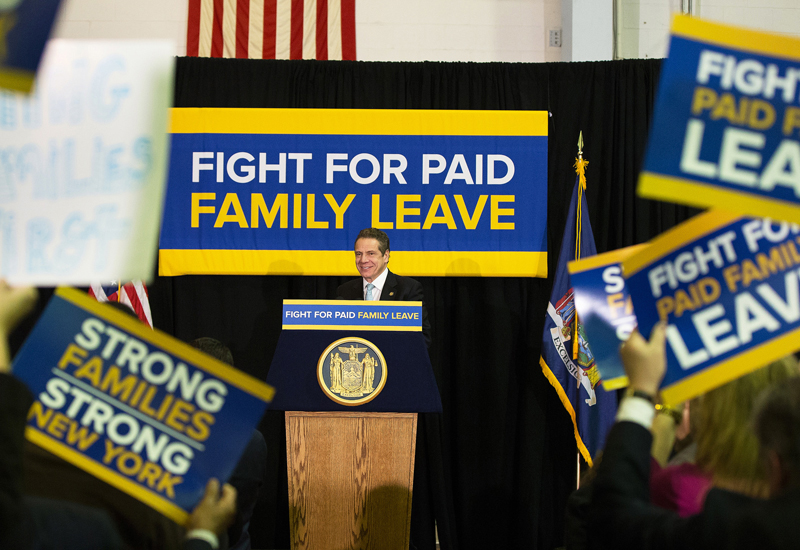 NEW YORK (WOMENSENEWS)—New York’s new paid family leave policy is being lauded as the best state-backed measure yet to guarantee the protected, compensated right to care for new babies or ailing close relatives.

The policy, adopted by the state earlier this month, will entitle a worker, starting in 2018, to half a week’s pay for 12 weeks and then, by 2021, to two-thirds of a weekly pay check for up to 12 weeks.

But it also remains untested territory, advocates and academics agree. Does earning 50 percent, or even up to two-thirds, of your weekly income suffice? Will it support the average new mother or low-income woman who has trouble making ends meet on her full income?

“We don’t have enough data to answer these questions yet,” said Ruth Milkman, a sociology professor at the CUNY Graduate Center who researches and co-wrote a 2013 report on paid leave in California. “It will take some years to get these answers. We are taking baby steps.”

In the meantime, there is plenty of time to wonder if this law will clear hurdles that laws in other states have hit since the first gears of the New York law don’t start turning until January 2018.

Paid family leave was passed in California in 2002 and implemented two years later.  In New Jersey and Rhode Island, comparable policies, approved in May 2008 and July 2013 respectively, were enacted months later.

Participation in the family leave programs in California and New Jersey has been low so far, while more people have taken advantage of the Rhode Island policy – a fact that could be attributed to the job protection the legislation guarantees.

New Jersey only had about 155,000 leave claims filed from July 2009 through 2014. A recent study by Columbia University’s Mailman School of Public Health found “inadequate information and outreach” has discouraged participation.

While the law in New York does not include funding for public awareness, there is about $10 million for implementation.

“The real work is to make sure people are actually aware of it and understand how it works and employers are aware of it,” Rankin said. “We want to have an easy process in place for people.”

Another weakness of the laws in New Jersey and California is the lack of job protection. Advocates say this poses an obvious deterrent for people who are not in a position to take a leave of absence without the assurance that their jobs will be there when they return.

Sherry Lewaint is co-founder and executive director of the New York-based legal center A Better Balance, one of the organizations that has long advocated for paid family leave. A Better Balance also provides free legal advice and information to New York pregnant women and family caregivers through its clinic.

Lewaint said job security was one of the most important elements to the policy that advocates like herself have fought for over the past several years. “It is a progressive bill and it is the best in the country,” she said in a recent phone interview. “It sets a whole new standard.”

Lewaint and other advocates also pushed for workers to eventually receive two-thirds of their weekly salaries. In New Jersey, for instance, the limit is 50 percent.

Earning two-thirds of a weekly salary would be difficult but not unfeasible for low-wage working women, finds a 2015 report by the Community Service Society.

“It is going to be hard for a low-wage worker, but it is a lot better than half,” Rankin said in a recent phone interview. “We wanted to get the maximum amount we thought would be feasible… I was the person who argued, we need two-thirds because half of weekly wages is not enough for people who have very little cushion and no savings.”

In New York City alone, one-fourth of working women live in a low-income household or make less than $38,000, supporting a family of three, Rankin found. Two-thirds of these women are black or Latina and have less than $500 in savings to fall back on. While the small focus groups she surveyed seemed willing to contribute to paid family leave, the women also expressed concern that other people would not want to make contributions.

The United States is the only advanced industrialized nation that lacks a federal family leave policy. The benefits of family leave have been shown to include everything from happier workers to lower turnover to economic growth.

A total of 18 localities across the U.S. are in some phase of developing paid family or parental leave legislation. The movement signals a push towards federal legislation, which could, one day, supplement states’ and cities’ policies that provide partial support.

The New York legislation starts in January 2018, when all employed New Yorkers – including independent and hourly workers – will begin to pay into the employee-funded program.

All existing state-backed family leave programs are employee funded. Some that are still in the works, such as the one in Washington, D.C., would receive employer support.

New York’s policy applies to those wishing to take a break from work to provide family care, a term that can include bonding with a new baby or foster child, and tending to a spouse or parent, though not a sibling.

A cap for high earning workers would alter, depending on inflation, but would max out at about $1,297.

“This is huge, in terms of the impact on the workforce in New York State,” said Donna Dolan, executive director of the New York Paid Family Leave Coalition. “I think you are going to have the outcome of employees who are more loyal, more productive. They are going to feel so pleased that they have had this opportunity to not have to suffer financial hardship when they needed to take time off to care for their families.”

Employed New Yorkers will automatically pay into–or have the option to support, in the case of independent workers–a pool comparable to the state’s present disability fund.

Starting in January 2018, employers will enroll their workers and a weekly 0.70 cents will be deducted from their paychecks into the fund, an amount that will rise to $1.47 by 2021.

There are a couple key caveats. Beneficiaries must have worked for at least six months. Workers need to pay into the program for several months before they can stand to collect money from the fund, as well.

Amy Lieberman is a journalist based in New York City, where she reports on human rights, social issues and the environment for a range of news outlets.