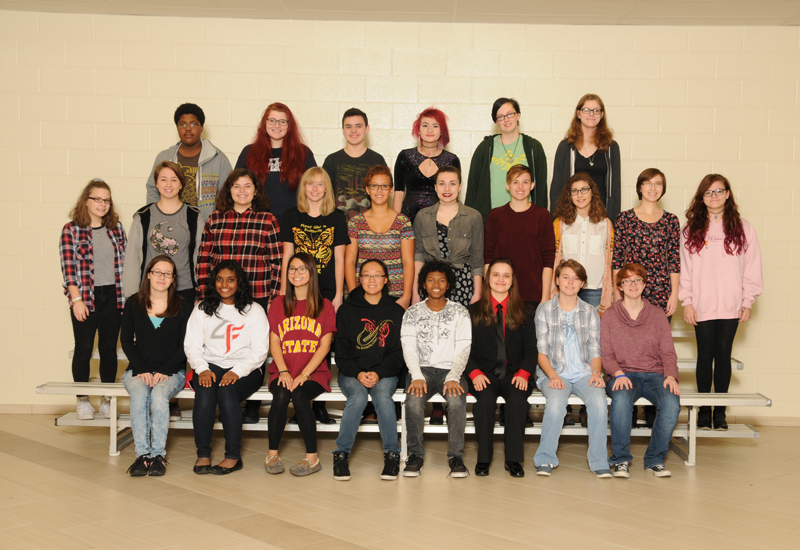 FISHERS, Ind. (WOMENSENEWS) –When sophomore Tony Leppert, 16, started telling his friends and family to start referring to him using male pronouns, like “he” and “him,” the transgender sophomore faced some pushback.

“I’ve had people look at me and tell me they are never going to use my preferred name/pronouns because I will ‘never be a man’,” he said. “It’s definitely been hard but if it means I might be comfortable with myself someday then it’s totally worth it.”

The challenge of coming out transgender in a conservative Indiana suburb 20 miles from Indianapolis was eased for Leppert by the community he found at school. Fishers High School, with a student body of 3,300, has an active LGBTQ club and two new single-stall bathrooms for transgender students. This is the right environment, advocates say, for the 19 percent of the student body who identified as transgender in a survey of 2,000 students.

While the club uses the term LGBTQ to stand for lesbian, gay, bisexual, trans and queer, there is also growing usage of LGBTQ+, with the plus sign standing for “questioning.”

“As far as school issues go, there are only a few kids who have been rude,” Leppert said in a phone interview. “More than a few try to convince me I’m just in a phase or that it’s not a real thing.”

Leppert found help, support and new friends at the Equality Alliance Club, which meets Wednesdays after school. Pronoun preference is a big deal to members of the club, which distributes pamphlets to students about pronoun usage, LGBTQ definitions and helplines for students in need.

Their work has paid off.

“I don’t have a lot of experience with transgender people, but now that it has become present in this generation and is getting noticed more around the school, I have been more careful with how I am using my pronouns and who I am saying ‘them’ to,” junior Liza Fortozo said after seeing a pamphlet in class one day. “Them” refers to the pronoun that some trans students prefer.

‘A Form of Violence’

This is exactly the type of awareness Dorian Thompson, a straight female who serves as student leader for the Equality Alliance Club, was hoping the pamphlets would achieve.

“Improper pronoun usage is a form of violence toward LGBTQ youth struggling with gender identity issues,” Thompson, 18, told the club at a recent meeting.

Club member Gloria Swardenski feels it is her responsibility as an ally to use a person’s chosen pronoun. “Transgendered people in my experience want to be called by their chosen pronoun just to feel accepted and more ‘normal’,” Swardenski, a senior, said in an interview during an Equality Alliance Club meeting.

When it came to a question of gender, 58 students of the 2,000 surveyed in the school – about 3 percent – identified as both male and female. Ten percent were undecided of their sexuality.

Fishers is a majority white suburb of roughly 80,000 with an average household income of about $97,000 a year, according to City-Data.com.

About 0.3 percent of the world’s population is considered to be transgender, around 700,000, according to UCLA Newsroom. Transgender celebrities such as Caitlyn Jenner and Laverne Cox and high profile protests, including those in North Carolina over a state law banning individuals from using public bathrooms that do not correspond to their biological sex and in Texas over a “bathroom bill,” are mainstreaming the conversation around identity and gender.

With the increase in awareness for LGBTQ students at Fishers, staff members had to adapt to the changes around the school in student gender identity, said guidance counselor Kelly Applegate.

“Gender identity is such a new thing and it seems to happen more with girls identifying themselves as male [at Fishers], which is something they are allowed to do,” Applegate told Teen Voices in an interview from the counselor’s office. “We [guidance counselors] can have our views and opinions, but we have to be supportive of all students and make sure everyone like family and staff members are on the same page when a student decides to change genders.”

Staff at the school wanted all students to feel comfortable at school. But the bathroom situation with transgender students made that difficult.

“Bathrooms are a huge problem and not just for me,” said Leppert. “A lot of trans kids find it a huge dysphoria trigger to go to the bathroom,” Leppert said, referring to a discomfort with one’s assigned gender and the desire to live as the opposite sex.

Gender dysphoria is a common condition among transgender people and it symptoms, according to Elements of Behavioral Health, often occur at two points, during the earlier stages of childhood and the teen years.

The school now has two single-stall bathrooms that are easily accessible to the students. The restrooms will have a plaque beside the door with a look of a family restroom with a male and female on it. In previous years, students had to go into the nurse’s office if they wanted to use a one stalled restroom but now all LGBTQ students know about the changed restrooms.

“The evolution of it [LGBTQ] in general is so great and we have to make sure students have a feeling of inclusiveness,” Assistant Principal Ryan Taylor told Teen Voices in the main office of the school.  “Obviously the bathrooms are one of those issues.”

Denying access to bathrooms can increase transgender students’ rates of suicide, according to a study in the Journal of Homosexuality.

Fishers High School didn’t make a big announcement about the bathrooms. The Equality Alliance Club advisor found out about it through an internal newsletter and shared the news with the club members.

“It is just another step closer to acceptance,” said club leader Thompson.

Not everyone at the school is comfortable with the adapting environment though.

“According to the Bible, you aren’t supposed to do these actions [change genders] or question if you are the right gender,” said senior Brady Riley, a Catholic, in the lounge area of the school. “God doesn’t make mistakes. However, we love all of his children.”

While Riley may not fully support students changing their gender, she refrains from any behavior that would be discriminatory and uses the preferred pronouns of LGBTQ classmates.

Despite the positive steps taken at Fishers, some LGBTQ students say more could still be done to make all students feel safe and welcome at their schools.

“There is also a lot of discrimination that is almost glossed over,” transgender senior Cole Snipes said over the phone. “It’s possible to, and not uncommon, to hear people using gay as an insult or as a joking term. And teachers and students tend to assume automatically that any significant other is the opposite gender as to whomever they are talking to. While this in itself isn’t necessarily as bad as outright, hateful discrimination, it does have an effect on LGBTQ students not feeling recognized or welcome.”

Hannah Faith Sullivan is a senior at Fishers High School. She is the yearbook's editor-in-chief and the goalkeeper for the girls soccer team. She will attend Indiana State University in the fall, where she will play soccer and major in journalism