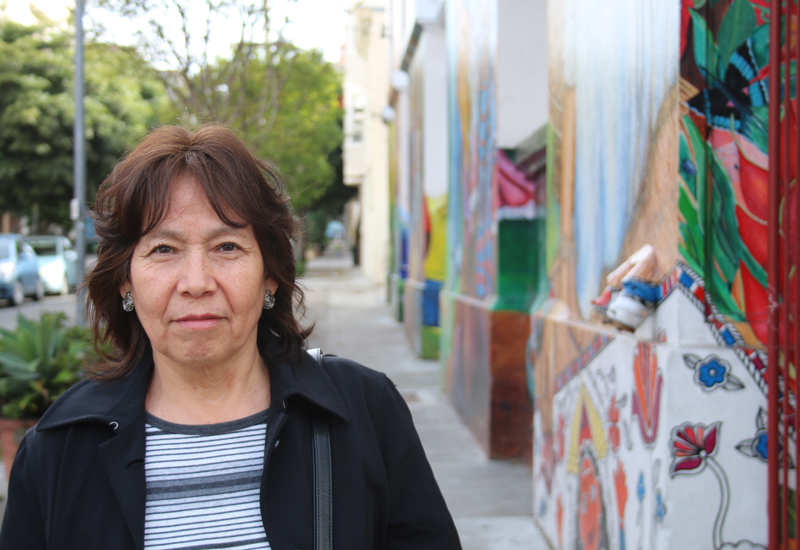 SAN FRANCISCO (WOMENSENEWS)— It’s 6 p.m. and 58-year-old Ines Lazarte’s knees are stiffening as she struggles to climb the cement steps of the fourth house she is cleaning today.

Lazarte, who moved to San Francisco in 1998 from Bolivia’s capital of La Paz, has been a care provider for elderly clients and a house cleaner for 15 years.

At an age when many Americans are trying to arrange lighter work schedules, Lazarte sometimes works 10 or 12 hours a day.

“I still work hard days and long hours but now I’m not giving my work away and I get paid what I deserve,” says Lazarte, who earns about $15 an hour normally and more than $22 an hour when she works overtime.

But Lazarte’s new wages are not secure. She recently attended a Sacramento rally to demand that lawmakers make overtime pay protection for domestic workers, including house cleaners, nannies and elderly care providers, a permanent law in California.

Under California’s Domestic Worker Bill of Rights, Lazarte can demand 1.5 times her regular pay after nine hours of work a day. This protection is not offered to her under the Fair Labor Standards Act (FLSA), the federal law that establishes the national minimum wage and overtime pay for most workers.

The FLSA requires employers to pay 1.5 times the regular rate of pay to eligible employees after 40 hours of work in a workweek. Since domestic workers, including Lazarte, work in multiple homes and for multiple employers in a week, they may not work 40 hours or more in total for one employer and therefore are not entitled to overtime pay under the federal law.

The Domestic Worker Bill of Rights, also known as law AB241, was passed in 2013 and extends overtime protections to an estimated 300,000 privately hired personal attendants who care for and support thousands of individuals and families in California.

However the law was limited to three years and will expire on Jan. 1, 2017, unless it becomes permanent under the state bill 1015 (SB1015). The bill recently passed in the California state Senate and is currently being deliberated on in the state Assembly.

SB1015 is supported by more than 115 organizations and nonprofits throughout the U.S., including the Western Center on Law and Poverty, chapters of the American Federation of Teachers and the American Civil Liberties Union of California.

Violation of the law is a misdemeanor and reportable by the domestic worker to the California Division of Labor Standards Enforcement.

Opponents include the Sacramento-based California Association for Health Services at Home, or CAHSAH, a trade group that represents more than 950 licensed home agencies, hospices, insurance providers and other services. CAHSAH has told the state Senate that the overtime requirements are hard on struggling seniors who need more than nine hours of care a day or 45 hours a week but cannot afford to pay the higher wages.

Opponents have also reported that disabled individuals and seniors have to hire multiple caregivers in order to avoid paying overtime wages and that not all domestic workers are benefitting from the law.

CAHSAH reports that seniors with dementia have experienced confusion from having multiple caregivers in their home.

California’s Department of Industrial Relations has been conducting surveys about AB241’s impact of the overtime requirements on domestic workers and their employers. Those findings have not yet been released.

‘Law Has Changed My Life’

Lazarte, meanwhile, is very clear about its impact on her. “The law has changed my life since I found out about in 2013.  I can demand overtime pay and know the law is on my side,” says Lazarte, who currently attends to two elderly women on a daily basis, giving them baths, getting them dressed, making food and other daily tasks. Lazarte squeezes in house cleaning jobs between her caregiver shifts.

She raised her son and her younger sister, often times working 15-hour days to to make ends meet.

“Before the passing of AB241 I couldn’t demand time and half after nine hours of work,” says Lazarte, who rents a 12-by-8-foot room in an apartment in the Mission District for $700 a month. “I never had enough to put into savings. My son and sister are my savings because I’ve put everything into making sure they are successful.”

With overtime protections, Lazarte says she’s been able to cut back her hours and work a regular eight-hour day on most days. “The work is still very hard, but I’m living with dignity now.”

“Because domestic workers work inside other people’s homes the struggles they face are largely out of the public spotlight,” Katie Joaquin, the campaign director for the California Domestic Workers Coalition, said in a recent phone interview.

Joaquin says some of the large home care agencies haven’t complied with AB241 and are waiting to see if it expires. “We are hopeful that it is not going to roll back and the recognition of domestic work is increased,” she says.

In the U.S., there were roughly 2 million workers in in-home occupations in 2012, according to the Economic Policy Institute. About 93 percent were women and more than 33 percent were immigrants.

In 2012, a survey by the National Domestic Workers Alliance of 2,100 nannies, caregivers and housecleaners found that 23 percent were paid below the state minimum wage, 35 percent worked long hours without breaks and 65 percent were not paid for their extra time.

A report released on May 4 by the University of California Los Angeles Labor Center found that 16 percent of about 500 randomly selected California households employed domestic workers to provide care for children, housecleaning or support seniors or people with disabilities. Based on the results of the survey, UCLA researchers estimate that 2 million households in California employ domestic workers and 1 in 10 employers hire live-in workers.

In 2013 California was the third state to pass a Domestic Worker Bill of Rights. New York and Hawaii already had similar protections and Oregon, Massachusetts and Connecticut followed. Illinois has a pending bill (HB1288).

Lazarte is part of La Colectiva, a San Francisco women’s collective that brings together immigrant women, mostly from Central and South American countries, for training and information about their rights as workers.

The group was founded in 2001 and now has more than 300 members, who meet weekly in the organization’s office in San Francisco to share their experiences with one another.

“The women work in isolation in people’s homes,” said Guillermina Castellanos, a co-founder of La Colectiva, based in the city’s Mission District. “Our group meetings give them a space to share how they feel and are treated at work.”

Lourdes Dobarganes first learned about the Domestic Worker Bill of Rights at a La Colectiva meeting in March 2013. The 48-year-old from Mexico cares for an elderly woman part time and cleans 20 to 25 homes every month.

“When the law passed, most of the people I worked for knew about it and immediately started paying me more for the work I did and letting me know that I should take breaks during my work,” says Dobarganes, who lives on San Francisco’s Treasure Island, where housing is more affordable than in the city.

She says before the Domestic Worker Bill of Rights passed in 2013 she would work full time and make roughly $2,000 a month. That wasn’t enough to pay the $2,200 rent for the home she lives in with her husband and four children and commuting costs of traveling to and from the city every day.

“In the last three years my income has almost doubled and my husband and I don’t worry about not having enough money for food and other necessary items every month,” says Dobarganes, who spoke with Women’s eNews at a La Colectiva meeting.

Halima Kazem is an investigative journalist who writes about human rights and social justice issues in the United States and abroad. She spent 10 years reporting on the war and rebuilding efforts in Afghanistan. Her work has been published in the Los Angeles Times, the Guardian, Al Jazeera America, the San Francisco Chronicle and the Christian Science Monitor. She is the author of a children’s book, the co-producer of a documentary film about the first woman who ran for president in Afghanistan and a journalism lecturer at San Jose State University.