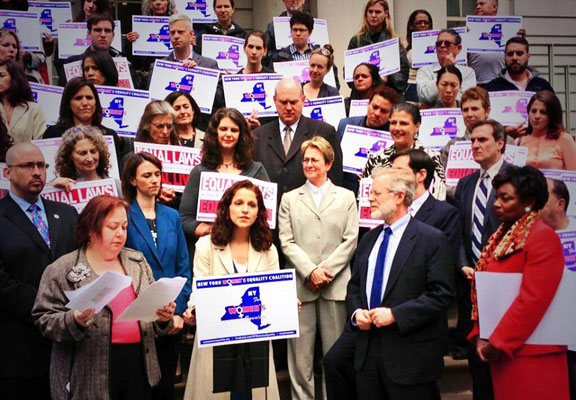 A series of bills that would protect women’s rights in New York state are being reintroduced into the Senate. Also this week, the pregnant woman sentenced to death in Sudan is being shackled.

A series of bills that would protect women’s rights are being reintroduced into the New York Senate after the package was derailed last year over a contentious late term abortion proposal, The Associated Press reported May 20. The Women’s Equality Act is a series of 10 bills that cover topics such as reproductive rights, pay equity, sexual harassment, human trafficking and tougher order-of-protection laws, in addition to other forms of discrimination against women in the state.

The United Nations launched a year-long campaign aimed at mobilizing governments and people in favor of gender equality, New Delhi Television reported May 22. The campaign was launched in celebration of the 20th anniversary of the U.N.’s world conference on women that was held in Beijing. “Our goal is straightforward-renewed commitment, strengthened action and increased resources to realize gender equality, women’s empowerment and the human rights of women and girls,” U.N. Women executive director Phumzile Mlambo-Ngcuka said. UN Women advertised the launch via the hashtag #Beijing20 on Twitter.

U.S. Defense Secretary Chuck Hagel said May 23 that new Navy officers will be counted on to lead the fight against sexual assault, remain ethical under tough circumstances and help people in the military facing mental health issues, the Associated Press reported May 23. Hagel told the graduating class of the U.S. Naval Academy that students have seen how sexual assault can destroy trust and confidence at the core of the military. In the past year, the academy has seen the prosecution of three academy football players accused of sexually assaulting a classmate. Charges against two were dropped. A third man was acquitted.

New York Sen. Kirsten Gillibrand launched Off The Sidelines May 21 as a call to action to women to get engaged in issues they care about and to make their voices heard. Getting off the sidelines will take many forms, from starting a Twitter account, to writing a letter to the editor, to volunteering on a campaign or even running for office.

The U.S. House of Representatives passed five anti-human trafficking bills May 20, Time reported. The bills address issues such as providing educational programs for victims as well as requiring the U.S. to notify other countries when convicted pedophiles travel within their borders. The bills are expected to pass in the Senate.

Same-sex marriage bans were struck down in Oregon and Pennsylvania on May 19 and May 20 respectively. In Oregon the decision takes effect immediately, meaning couples can begin marrying, Think Progress reported. Pennsylvania would be the 19th state to legalize same-sex marriage in the country if the judge’s ruling stands, ABC News reported May 20.

The first member of European Parliament representing a feminist party is likely to be elected to the European parliament next week, The Guardian reported May 20. Feminist parties in Sweden, France and Germany are running for seats with the Swedish Feminist Initiative, represented by Soraya Post, on course to break through the 4 percent electoral threshold needed to secure a representation in Brussels.

Army National Guard Staff Sgt. Tracy Dice Johnson, whose wife was killed fighting in Afghanistan, has received word from the Department of Veterans Affairs that she will receive the same survivor benefits that heterosexual married couples are entitled to, The Huffington Post reported May 19.

An 11-year-old girl from California has become the youngest person to qualify for the U.S. Women’s Open, Aljazeera reported May 21. Lucy Li has earned a spot in the golf tournament, which will happen next month.

The Senate passed a resolution last week to express “sincere sympathy and regret” to descendants of women whose citizenship was revoked under the Expatriation Act of 1907, and reaffirms the Senate’s “commitment to preserving civil rights and constitutional protections for all people of the United States,” The Los Angeles Times reported May 16. The law, passed more than a century ago, stripped thousands of women of their U.S. citizenship for marrying foreigners.

The U.S. husband of the woman sentenced to death in Sudan traveled from New Hampshire to visit her to find her shackled in chains, the New York Daily News reported May 20. “Her feet are shackled. Her legs are swollen,” Tina Ramirez, executive director of Hardwired, a U.S.-based advocacy group against religious persecution, told the Daily News. “It’s just outrageous. She’s eight-and-a-half months pregnant.” Meriam Ibrahim, 26, was sentenced to death last week by a Sudanese court in Khartoum after being convicted of apostasy for allegedly leaving Islam. On May 16, CBS News reported New Hampshire’s senators are trying to save Ibrahim and addressed a letter to John Kerry to ask him to grant her asylum.

While private and public not-for-profit institutions are not the most affordable options for students, about 40 percent of all undergraduates attend a community college, and women accounted for about 57 percent of those students in 2010, The Washington Post reported May 19. Yet, even these lower-priced options aren’t always accessible to everyone for a simple reason: They don’t offer child-care services. Many students with young children aren’t able to go to college because they can’t find — or can’t afford — someone to take care of the kids while they’re in class. One report found that in more than two dozen states, the cost of day care is more than the cost of tuition and fees for public colleges. About 1.3 million of the 2 million student parents at community colleges in 2008 were mothers, according to a report by the American Association of University Women.

New York Mayor Bill de Blasio has asked tabloids to apologize for publishing stories about his wife that accused her of being an inadequate mother, The New York Times reported May 19. The New York Post’s headline said “I Was a Bad Mom,” while the New York Daily News’ headline read “Didn’t Want to Be a Mom.” Many people have expressed their criticism of the tabloids’ coverage via the hashtag #standwithchirlane on Twitter.

The American Civil Liberties Union filed a complaint this last week with the U.S. Department of Education Office for Civil Rights against the Hillsborough County Public School district in Florida, Ms. Magazine reported May 16. According to the complaint, the school district’s single-sex classrooms violate the federal amendment Title IX and perpetuate gender stereotypes.

The president of the jury of Cannes Film Festival and a former Palme D’or prize winner, director Jane Campion, has criticized the film industry for failing to recognize the contribution of women, CNN reported May 16. Speaking at a press conference, Campion said: “I think you’d have to say [there is] inherent sexism in the industry. Thierry [Fremaux, artistic director of the festival] told us only 7 percent of the 1,800 films submitted to the Cannes Film Festival were directed by women and we have 20 percent [women] in all the programs.”

Kentucky Secretary of State Alison Lundergan Grimes is officially the Democratic nominee in Kentucky’s Senate race, the Huffington Post reported May 21. Grimes faces Senate Majority Leader Mitch McConnell for the seat. A Huffington Post opinion poll shows that the candidates are virtually tied. Another female politician, Michelle Nunn, has won the Democratic primary in Georgia, the Huffington Post reported May 20. Nunn is running for the same seat that her father, Sam Nunn, held for a quarter of a century.

A detailed analysis of the various efforts to reduce child marriage in India, the strategies, strengths and weaknesses, has been released this month by the American Jewish World Service, the organization that supported two India-based feminist organizations to perform the evaluation. Among the recommendations are for those who wish to reduce the number of teens marrying early to focus on empowering young people, in part by critiquing social norms, and to measure not only behavioral outcomes but also changes in values and attitudes.

Nigerian teachers have gone on strike to protest the kidnapping of more than 200 schoolgirls by Islamist group Boko Haram, Reuters Canada reported May 22. Teachers marched while chanting “bring back our girls.” The teachers are also protesting Boko Haram’s attack and assault of Nigerian teachers. The U.S. has deployed approximately 80 military personnel to Chad in an effort to find the Nigerian schoolgirls who were kidnapped by Boko Haram, The New York Times reported May 21. Earlier this week, Boko Haram dropped its demands for the release of top commanders in talks with the Nigerian government and is prepared to start releasing up to half of the kidnapped schoolgirls in coming days, The Telegraph reported May 18.

A lawyer for convicted U.S. document leaker Chelsea Manning has threatened to sue the Army if she is not given sex change therapy in military prison, the BBC reported May 19. Formerly known as Bradley Manning, she has been convicted for leaking classified information to Wikileaks. The Pentagon prohibits transgender people from serving openly in the military.

A trial over a 2013 Alabama abortion law opened May 19 with the owner of Montgomery’s single abortion clinic describing the difficulties in finding physicians to perform the procedures, Montgomery Adviser reported. In testimony before U.S. District Judge Myron Thompson, June Ayres, director of Reproductive Health Services, said that in 36 years at the clinic she had never been able to hire a local doctor to work at the clinic. Physicians who worked in the clinic — referred to in the court by letters, such as Dr. A and Dr. D — have dealt with harassment, including in one instance the posting of a physician’s personal information on an anti-abortion website.

Saudi Arabia’s Ministry of Justice has introduced a fingerprinting system to identify women who appear in court, Saudi Gazette reported May 20. There have been instances in the past where women have been impersonated at their court appearances. The system allows for accurate identifications because women are not allowed to uncover their faces.

A group of 26 Italian women who claim to be having affairs with Catholic priests have written a joint letter to Pope Francis begging him to end the Catholic Church’s ban on priests having sex and getting married, The Telegraph reported May 18. The women, who met through a Facebook campaign, wrote to the Pope requesting a meeting to put forward their case, claiming they were just “a small sample” of the many partners of priests “living in silence.

Would you like to Send Along a Link of This Story? https://womensenewsp.wpengine.com/story/cheers-and-jeers/140523/ny-rights-bill-alive-sudan-chains-mom-facing-death