A month of far-flung 24-hour hunger fasts culminated on Capitol Hill April 8 with about 100 women trying to “feed courage” to lawmakers who continue to stall on actions that advocates say many women, in particular, need desperately.

(WOMENSENEWS)–Twitter has been full of tweets by women fasting in Washington, D.C., for the past two days.

These protesters join more than 1,500 women who have fasted for at least 24 hours in 70 events spread over 35 states and Mexico in a month of demonstrations.

Their aim is to shine a light on the toll that deportations of undocumented immigrants and the failure by U.S. lawmakers is taking on women.

“Much of (our work) is about putting a face on the issue,” said Pramila Jayapal, chairperson of We Belong Together, in a phone interview late last week. “We’re talking about women and children that are disproportionately burdened by a broken immigration system.”

We Belong Together, a Seattle-based campaign that works to mobilize women in support of “common-sense” immigration reform, co-sponsored the fasts and offers this list of reform proposals that would help women in particular.

One example of reform being sought is to expand protections for women here legally on dependent visas from the threat of domestic violence. Currently, only a quarter of all employment visas are given to women as principal holders, the rest are dependent on their spouse’s visa, which means that they themselves cannot work.

“Because most women cannot get employment visas, 70 percent of all women here legally have come through the family immigration system,” said Jayapal.

As immigrants in a foreign land, Jayapal said they are isolated and fully dependent on their spouse and more vulnerable to domestic violence. “You have no ability to work if you come here on your husband’s visa,” she said. “There have been increasing numbers of suicide . . . very high instances of domestic violence because (the woman) is financially and psychologically dependent on her spouse.”

The month-long demonstrations–called Act.Fast, where organizations signed up for a day of fasting during the past month–culminated on April 5, the National Day of Action Against Deportations, and were followed by a 48-hour fast by 100 women that began April 7 in the capital and ended today, April 9.

“The main message of the fast is that women across the country are sacrificing their food in order to feed the courage of the House and to urge the executive branch to stop deportation,” said Jayapal.

Messages from fasters and supporters were collected in a “courage basket” that was delivered to the Capitol building on April 9, according to We Belong Together‘s website, where supporters can also send their own messages.

Women also split into three groups and tried to reach Congressman John Boehner, Eric Cantor and Kevin McCarthy. A group of 15 slipped a sign that read “Courage: Missing” underneath Boehner’s door after finding it locked. They were also addressed by Rep. Ileana Ros-Lehtinen and Rep. Mario Diaz-Balart, both Republicans from Florida who have expressed their dedication to supporting immigration reform.

The fasters also spent an hour with Valerie Jarrett, senior advisor to President Barack Obama, and Cecilia Munoz, domestic policy director, during which time they shared their stories about deportation.

We Belong Together organized the fasts along with the Fair Immigration Reform Movement, a Washington-based coalition of immigrant rights organizations, and Service Employees International Union, a labor union also in Washington, D.C.

Women currently comprise 51 percent of all immigrants coming into the United States, according to We Belong Together.

Many struggle to keep their families together, said Shivana Jorawar,
reproductive justice program director for the National Asian Pacific American Women’s Forum, an organization based in Washington, D.C., that also took part in the fasts, in a phone interview.

Jorawar knows about the hardships immigration imposes on families, and on women in particular, through her mother. As a child, her mother was left behind in Guyana in 1971 when Jorawar’s grandmother immigrated to the United States. She had to wait for two years to rejoin her mother and during that time she took care of seven younger siblings. When she finally got through the immigration process and was allowed to enter the United States, she had to entrust her siblings to her grandfather, where they faced abuse and neglect before they were able to join their mother and sister a full year later.

Jorawar’s mother had to wait two years before joining her mother, but she said the current immigration situation is often even harder on families. “Now people are separated for up to 20 years. There are 4.3 million people that are waiting in their home countries to be reunited with their families and to me it’s very much about allowing other women to have the same opportunities that my mother did.”

“In the middle of the night . . . immigration services will go to someone’s home and in front of their children, take them away, lock them up, and it’s really just not a way to live,” said Jorawar. “It’s a violation of human rights and we can do better than that as a country.”

In an independent analysis, The New York Times on April 6 reported that “since President Barack Obama took office, two-thirds of the nearly 2 million deportation cases involve people who had committed minor infractions, including traffic violations, or had no criminal record at all.”

More than half of undocumented immigrants are women, and 60 percent of them are in the labor force, working in professions where they can be exploited through informal or unverifiable employment. The remaining 40 percent are in caretaking roles in informal arrangements that leave them no pay stubs to verify their employment, said Jayapal. That can cut them off the path to citizenship and raise their risks of deportation.

Reem Zubaidi is an intern for Women’s eNews. She is a third year student studying journalism at Northwestern University in Qatar.

Would you like to Send Along a Link of This Story? https://womensenewsp.wpengine.com/story/immigration/140408/women-hungry-immigration-reform-stage-fasts

Big Apple Women Push to Get Out of the Red 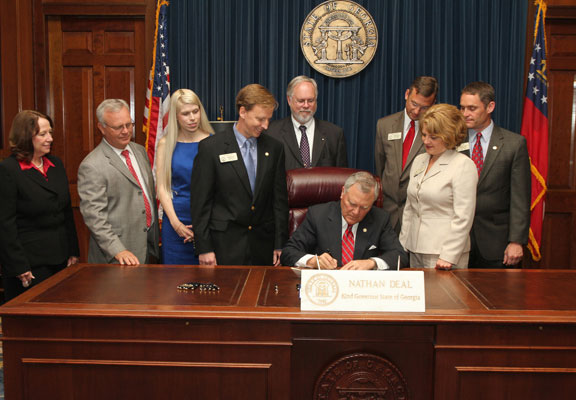