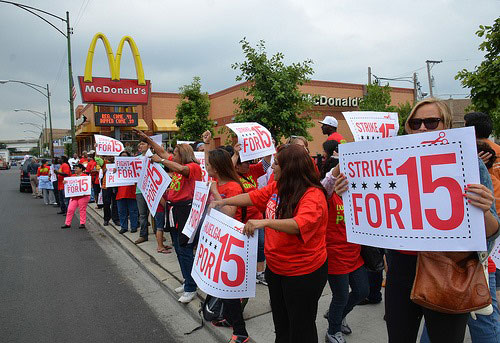 Twitter users expressed support for the Dec. 5 protests around the country for fast food workers. “All our wages will rise,” said one tweet. Fifty-two percent of the families of fast food workers receive public assistance, according to recent research.

NEW YORK CITY (WOMENSENEWS) –Posts under the hashtag FastFoodStrikes filled Twitter on Thursday, as protests were carried out around the country on behalf of higher wages for fast food workers.

Raising the minimum wage positively affects all of us who work for an hourly rate: all of our wages will rise. #FastFoodStrikes

The National Partnership for Women and Families and The United Food and Commercial Workers, both based in Washington, D.C., also expressed support.

RT @LowPayIsNotOK: ReTweet for Solidarity. Our hashtag today is #FastFoodStrikes that's with an “s”. Love it. Use it. pic.twitter.com/gvV9oetZ2N

The actions began about a year ago and are spearheaded by the Service Employees International Union, which has spent millions to bankroll local worker groups and organize publicity for the demonstrations, the Associated Press reported.

The protesters’ demand: raise their starting hourly pay to $15 from $7.25, the federal minimum wage.

The CEO of McDonald’s, America’s largest fast food restaurant, received a pay package in 2012 of $13.8 million a year, according to USA Today; much of that comes in the form of incentive pay, with a base salary of $979,167.

The median hourly wage of a fast food worker is $8.69, according to Oct. 15 research published by the University of California Berkley Labor Center, and an estimated 87 percent of these workers do not receive health benefits through their employers.

The protests, which follow others throughout the year, have come amid calls from some members of Congress and economists to raise the federal minimum wage, which was last increased in 2009, Atlanta Daily World reported.

Women made up about two-thirds of all workers who were paid minimum wage or less in 2011 and are 61 percent of full-time minimum wage workers, according to the National Women’s Law Center, citing the Bureau of Labor Statistics.

In a major speech on income inequality on Dec. 4, President Barack Obama said tackling this inequality would be a focus of his three years left in office. He suggested the minimum wage of $7.25 be hiked to $10.10 and called inequality the defining challenge of our time, Aljazeera America reported Dec. 5.

Full-time workers earning the current federal minimum wage make $15,000 a year, which puts them below the federal poverty level for a single parent with one child, Al Jazeera America reported.

I will gladly pay a little more for my order if it means workers will earn enough to support their families with dignity. #FastFoodStrikes

I have sympathy with the #FastFoodStrikes. But on the other hand, I'm not sure I want to wind up paying more for McD's “food”.

In his Dec. 4 speech, Obama also said the problem of dead-end, poverty-level wages are “a fundamental threat to the American dream,” The Kansas City Star reported.

Fifty-two percent of the families of fast food workers receive assistance from a public program such as Medicaid, the Supplemental Nutritional Assistance Program, the Earned Income Tax Credit and Temporary Assistance for Needy Families, compared to 25 percent of families in the work force as a whole, according to a University of California Berkeley Labor Center and University of Illinois study published Dec. 3.

Those opposing a higher minimum wage argue it will lead to job losses, The Kansas City Star reported.

In Washington, D.C., dozens of people carried signs and marched while singing “Jingle bells, jingle bells, jingle all the way, it’s no fun, to survive, on low low low low pay,” reported USA Today. In New York City, 100 protesters blew whistles and beat drums as they marched into a McDonald’s chanting “We can’t survive on $7.25.” And in Detroit, more than 100 workers picketed outside two McDonald’s restaurants, singing “Hey hey, ho ho, $7.40 has got to go!”

For some restaurants, however, it was business as usual. The McDonalds at Pennsylvania Station in Manhattan was operating at its usual speed early on the morning of Dec. 5 as customers placed orders and workers shouted, “Next. How may I help you?”

At that site workers declined to talk to Women’s eNews.

Lisa McComb, spokesperson of McDonald USA, downplayed the significance of the protest. “To right-size the headlines, however, the events taking place are not strikes,” she said on the company’s website. “Outside groups are traveling to McDonald’s and other outlets to stage rallies. Our restaurants remain open today–and every day– thanks to our dedicated employees serving our customers.”

Darina Naidu is an editorial intern for Women’s eNews and an intern at ABC News for the News Specialized Unit. She graduated with a degree in journalism from SUNY Plattsburgh in May 2013. Follow her on Twitter @DarinaNaidu.

Would you like to Send Along a Link of This Story? https://womensenewsp.wpengine.com/story/equal-payfair-wage/131205/fast-food-protests-bring-out-the-twitter-fan-mail 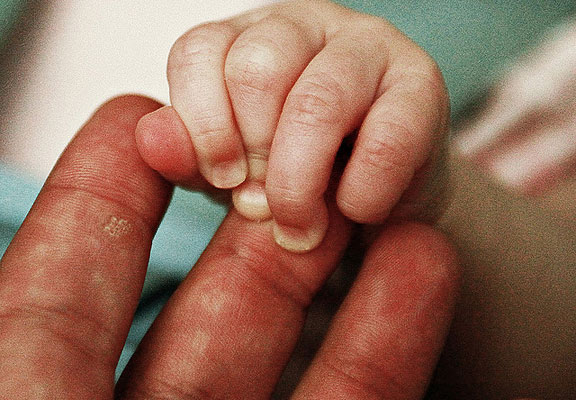 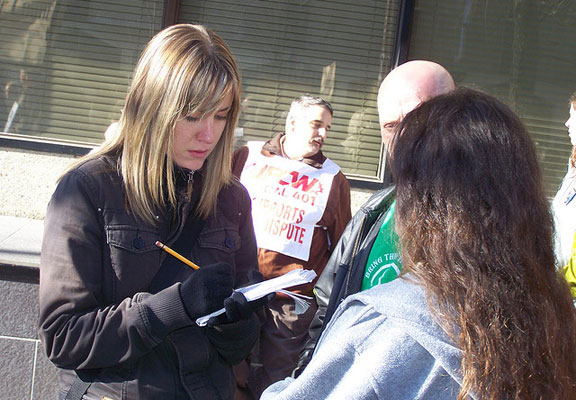