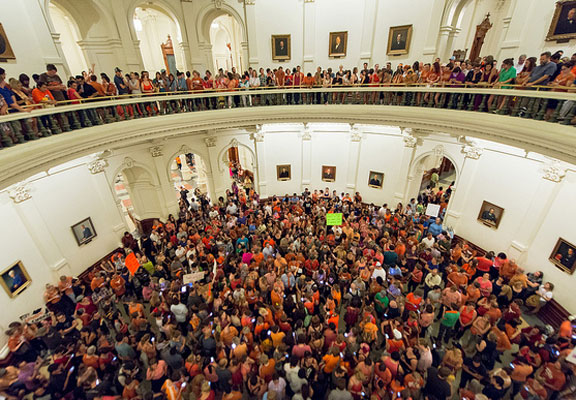 Texans Plan to Keep Up the Heat on Abortion Bills

After a dramatic filibuster of a restrictive anti-abortion bill in Texas, reproductive rights activists and anti-abortion protesters have flooded the Texas Capitol for the start of another special session. They plan to keep it up in the weeks ahead.

AUSTIN, Texas (WOMENSENEWS)– Legislative debate on the hotly contested anti-abortion bill favored by GOP Gov. Rick Perry will proceed over the next few weeks and supporters and opponents intend to cram the Texas Capitol to keep the heat on lawmakers.

Demonstrations on Monday, July 1, the start of the second special session, drew large crowds of abortion rights advocates to the statehouse from all over Texas to protest bills that had failed to pass in both a regular and a special legislative session.

As rally organizers had asked, these protesters came early and wore orange because coordinators knew that this would be the most meaningful color because it’s the hue of the University of Texas school team, the Texas Longhorns.

Many held signs saying: “Keep Your Laws Off My Body” or “Run Wendy Run,” a reference to Democratic State Sen. Wendy Davis who defeated the bills in a one-woman filibuster at the end of the first special session that ended at midnight on June 25.

Planned Parenthood, one of the organizers of the rally, estimated that more than 5,000 people turned up. Police estimates of the crowd were not available.

Several hundred anti-abortion activists also turned out. Dressed in blue, they gathered at the statehouse to support legislation that they said would save innocent lives and protect women’s health. Some carried crucifixes and rosaries, others held posters condemning abortion, while a few sealed their mouths with red tape marked LIFE.

The legislation would ban abortion after 20 weeks and reduce access to abortion services for all but the wealthiest by requiring abortion clinics to make costly upgrades in line with ambulatory surgical care clinics, a move that health advocates say is so burdensome that most clinics will be forced to close.

Warnings of Resurgence in Illegal Abortion

“The closure of free-standing clinics could lead to a resurgence of illegal abortion and complications,” Dr. Lisa M. Hollier, chair of the Texas District American Congress of Obstetricians and Gynecologists, said in public testimony during the first special session. “This would represent a significant step backward for the health status of Texas women.”

Time and procedural rules are widely expected to favor Perry’s side and pave the way to the passage of the bill this time.

Despite the gravity of the topic, the sheer scale of the pro-choice protests created a festive air. A Texas rock group, the Bright Light Social Hour, and later Natalie Maines of the Dixie Chicks, played to a crowd that stretched the length of the Capitol’s shaded boulevard.

Planned Parenthood‘s president Cecile Richards, herself a Texas native, captured the mood when she said: “We settled the prairies. We built this state and raised our families. We’ve survived hurricanes and tornadoes, and we’ll survive the Texas legislature! To put it in terms Rick Perry would understand: I am an American. I am a Texan. And no government gets to make my personal decisions for me.”

Many in the crowd had never been politically active before. Maria Alonso, 21, had watched events unfold during the first special session and wanted to be there to prevent “people taking advantage of women’s reproductive rights.” She had volunteered for Battleground Texas, an advocacy group geared towards mobilizing Democratic voters and was distributing leaflets to other protesters about trainings for civic engagement.

Makala Schells, 21, and Sean Thompson, 27, attended the protest with their infant son. “I felt like it was pretty much time for me to get involved in things like this,” said Schells. “I stood by and fumed [during the special session] but when I heard about this rally on Facebook I decided to show my support instead of being mad at home.”

Among the demonstrators who favor the bills was Amy Kinney, who brought her three small children with her. “It was really heartbreaking . . . to see it end the way it ended,” she said, referring to the way the bills failed to pass at the bitter end of the first special session.

In the first special session, anti-choice legislators cut short public testimony and proceeded to a vote. Even though Davis, aided by Democratic colleagues and supporters in the gallery, successfully blocked it with her filibuster, supporters of the legislation tried to pass the bill before the midnight deadline.

Several hundred onlookers packed into the building in the early morning hours, both inside the public gallery and outside in the rotunda. Their angry chants, coupled with electronic proof that the vote hadn’t occurred before midnight, led Republican senators to concede that the anti-abortion bill had indeed failed.

Furious, the leader of the Texas senate said that an “unruly mob” had “derailed” the legislation.

Now, on the governor’s side, a grassroots movement is working to bring more supporters of the far-reaching bill of abortion restrictions to the Capitol over the coming weeks. Perry is boosting the mobilization effort. Bill supporters have set up a Twitter hashtag — #stand4life – to rival the boisterous pro-choice #standwithwendy Tweet stream. Texas pastors are being asked to send their congregants to Austin. Bill supporters are encouraged to pray.

Carolyn Jones (www.carolynjoneswrites.com) is a freelance writer and journalist based in Austin<.. She writes primarily about health policy and reproductive justice. Events in Texas keep her busy.

Would you like to Send Along a Link of This Story? https://womensenewsp.wpengine.com/story/the-nation/130702/texans-plan-keep-the-heat-abortion-bills 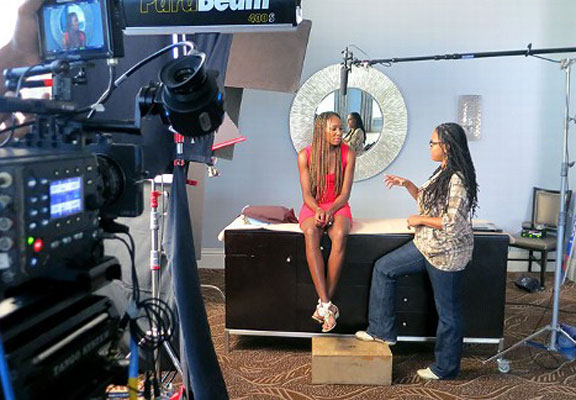 ESPN’s ‘Nine for IX’ Docs Give Athletes Their Due