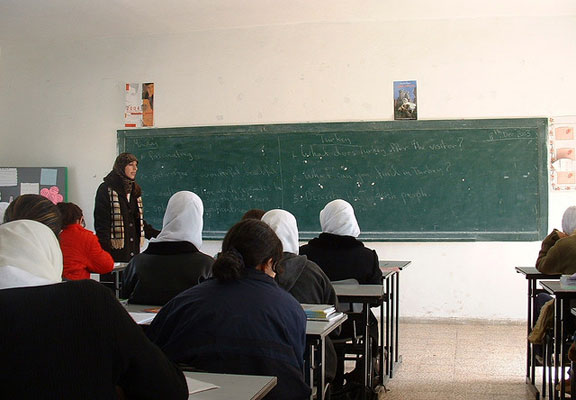 Young women at school in the Palestinian territories.
Uncategorized

A 14-year-old in Gaza Strip does not like the new rules that segregate her schooling from that of boys. She has plenty of company. But Hamas, which wants to impose Sharia, shows no sign of slowing down its drive to impose socially conservative regulations.

GAZA CITY, Gaza Strip (WOMENSENEWS)–Nisma Issa, a 14-year-old who recently switched from a private to a public school, doesn’t like the law passed in April that says boys and girls over 9 years old can no longer attend the same school.

“I don’t think this law will be to our benefit,” says Issa, who belongs to a Muslim conservative family, during an interview at a café here. “I felt happiest roaming my school with my friends, who are like brothers. I love my school as it is. Why should such laws complicate our lives?”

The law does not actually affect Issa’s new school because public schools in Gaza were already sex-segregated. But the new law will be changing life in Muslim and Christian private schools as well as United Nations schools, where classes were separated for boys and girls starting in April of this year, the beginning of the school year’s second semester.

The law, which also bans male teachers from working in girls’ schools in the Gaza Strip, is the

latest in a long list of measures–including efforts to impose Islamic dress on university women–introduced by Hamas, which promotes a conservative interpretation of Islam and gained control of the Gaza Strip in January 2007.

These regulations impose conservative mores on society, for women in particular. In 2009, Hamas prohibited women from riding behind a driver on a motorcycle. The next year women were banned from smoking in public.

Hamas has also been cracking down on young men who spike their hair or wear low-waist pants, two fashion trends popular among Palestinians in their teens and 20s.

Ahmed Arafa, 19, was snatched off the streets by two policemen while walking with his friends. He told Women’s eNews in a phone interview that his hair was shaved and his pants shredded before his father came to pick him up from prison.

His mother, Yusra, a 41-year-old dentist, says she understands and supports some of the measures introduced by Hamas, including the ban on women smoking in public.

“I understand why smoking was prohibited in public places, although I don’t get why the ban applies to women only. And, even though I spent almost all my life in more open, less conservative societies, I can see the logic in barring women from riding motorcycles,” she says.

But she says she entirely rejects the feminization of schools and prohibiting male teachers from working alongside female colleagues in schools. “This law has no benefit other than making clear the negative intentions when it comes to the subject of mixing [genders] and this is an insult to society as a whole.”

Given the social conservatism of Gaza, telling a male that he can’t be in the same place as women and young girls implies he might be a pervert, an insult that would be taken very seriously.

University laws prohibiting female students from wearing makeup, bright colors or transparent fabrics were introduced in 2006 in the Hamas-owned Islamic University of Gaza, before the movement came to power.

Continuous amendments, meanwhile, are being made by the Islamic University of Gaza’s Disciplinary Council, which punishes students–male and female–who do not abide by the university’s laws or challenge existing rules and laws.

The council can expel students and cancel credit hours without any tuition refunds. Their names are placed on a big “board of shame” at the center of the university’s campus.

With some exceptions (such as Al Azhar University, owned by the Fateh movement), women in the universities of Gaza–all of which are private–must be veiled for their graduation photo in order to receive degrees. (Fateh, the other main Palestinian political party, besides Hamas, was founded by the late Palestinian leader Yasser Arafat.)

The socially conservative Hamas movement began in 1987, the starting point of First Intifada, or the Palestinian uprising against the Israeli occupation of the territories, which lasted until 1993. As Israel exiled some religious leaders to Marj al zohour, at the southern border with Lebanon, Hamas activists began preaching in mosques and market places.

Members of the Hamas government dismiss criticism and say the laws entrenching sex-segregation or stricter dress codes in the education system are in line with the traditions and culture of Gaza, where the vast majority of residents are Muslims.

Walid Mizher, a legal consultant for the Ministry of Education, scoffed at the idea that Hamas is trying to “Islamize” the Gaza Strip.

“We are Muslims and we do not need to make people convert to Islam,” he said in a statement translated from Arabic that has been widely reported.

Hamas recently proposed a new penal code which would impose Sharia, Islamic law, on the Gaza Strip and include punishments like flogging and hand amputation for crimes such as theft. The draft law sparked widespread debate within Palestinian society as well as the ranks of the Hamas leadership itself.

Several human rights organizations have spoken against the law as likely to rupture Palestinian society.

“Sharia law will increase the wide gap between Hamas and Fateh,” Essam Younis, the director of the Al Mizan Center for Human Rights in Gaza, said in a press statement. “Someone needs to stop such an act for the sake of Palestinians.”

At a recent public session of the Palestinian Legislative Council, the 129-member legislative body, Yahya Moussa, who sits on the council, said members had twice rejected the draft penal code because it includes Islamic form of punishments.

The president of the Legislative Council has released the draft penal code to civil society organizations and political factions for discussion. 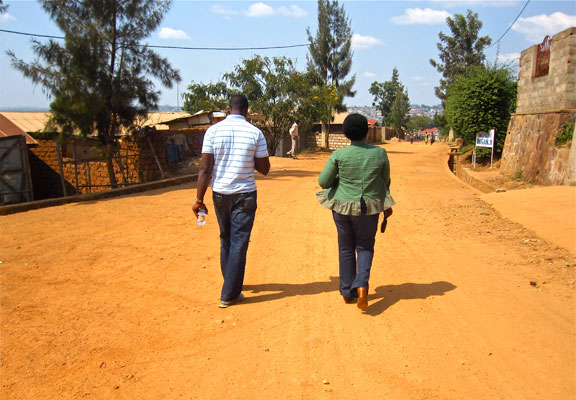 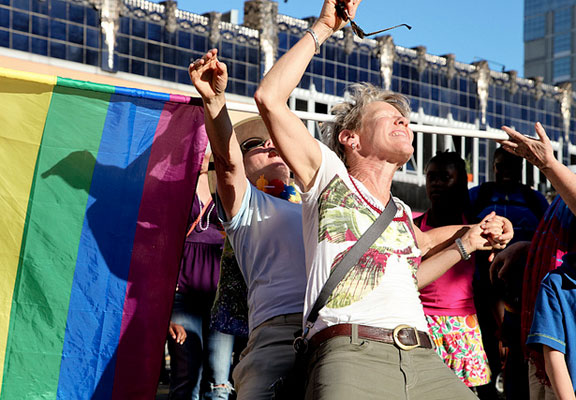