With millions of dollars at stake for Hobby Lobby, The Becket Fund for Religious Liberty, which brought the first challenge to the contraceptive mandate, will represent the Oklahoma City concern before the 10th Circuit Court of Appeals in Denver on May 23.

(WOMENSNEWS)–Veteran teams of anti-abortion pro bono lawyers are challenging the fines imposed by the contraception mandate of the Affordable Care Act in U.S. circuit courts of appeals because they claim the mandate places them in a Catch-22: pay the steep fines and adhere to their core religious beliefs or violate their faith and finance contraception.

On May 22, the Alliance Defending Freedom, a nonprofit center based in Scottsdale, Ariz., is hoping that the 7th Court of Appeals in Chicago will issue an injunction so its client, Grote Industries, won’t be subjected to fines for not providing the contraceptive coverage required by law since Jan. 1.

On May 23, the Becket Fund for Religious Liberty will represent Hobby Lobby before the 10th Circuit Court of Appeals in Denver in a similar suit.

Both centers are seeking injunctions because they believe that the cases are about religious liberty, and not employment or health care, which the government and opponents maintain.

These and other legal teams will be representing 30 or more for-profit companies this year and making religious liberty arguments about millions of dollars in fines. New suits are being filed each week.

“Nonprofit centers like ours that depend on donations are representing these small businesses pro bono because in addition to the fines, the cost of lawyers, travel and other expenses in pursuing these cases would wipe out the assets that took generations for the owners of these small businesses to accumulate,” said Matt Bowman, senior legal counsel of the Alliance Defending Freedom, in a phone interview. His group has 44 in-house attorneys and more than 2,400 volunteer attorneys.

Arrayed against them, on the side of the government, will be the American Civil Liberties Reproductive Freedom Project, as well as the National Women’s Law Center and other groups arguing that a business that enters the public sphere and operates a for-profit company can’t impose religious beliefs on its employees.

Under the Affordable Care Act,
fines for businesses with more than 50 employees that don’t cover all contraceptive methods approved by the Food and Drug Administration are $100 per day per employee.

Nineteen for-profit companies have been granted injunctions so that they don’t have to pay for contraceptives while the cases are moving through the courts. Hobby Lobby and five others have been denied injunctions. Three for-profit companies have been denied temporary restraining orders. And the rest –the latest cases filed–have had no action because the courts are waiting to see what happens with the leading cases, such as Hobby Lobby and Grote.

At least two teams–the Becket Fund and the Alliance Defending Freedom–plan to cite the Religious Freedom Restoration Act, a law signed by President Bill Clinton in 1993 that prohibits the federal government from imposing a “substantial burden” on any religious practice without a “compelling state interest.”

Three other powerhouse legal organizations have also jumped into the battle.

The Washington-based American Center for Law and Justice, which submitted briefs for Virginia, Florida and Michigan challenging the constitutionality of the Affordable Care Act, has filed six lawsuits.

The Chicago-based Thomas More Society, whose clients have included Lila Rose, founder of Live Action, which has conducted a series of campaigns against Planned Parenthood, has also filed six suits.

The Law of Life Project of the Washington-based Jubilee Campaign, which recently filed a suit challenging an Austin, Texas‘s ordinance that requires anti-choice pregnancy centers to post signs that they do not provide abortion, has filed one suit, on behalf of Triune Health Group, named one of the best places to work for women in the Chicago area by Crane’s Chicago.

The Washington-based Becket Fund filed the first challenge to the contraception mandate in November 2011 on behalf of Belmont Abbey College, a Catholic college in Belmont Abbey, N.C., seeking an exemption as a religious employer.

In 1988, Kevin J. “Seamus” Hasson, founder of the Becket Fund, successfully defended the right of the Catholic Church to maintain its tax exempt status while teaching and advocating its moral position on abortion.

Since 1994, when the Becket Fund was founded, the center has defended the Amish, Anglicans, Buddhists, Hindus, Jews and non-denominational Christians in church-state cases. Early cases focused on the public expression of religion, such as displays of religious statues. Now the trend is toward religious liberty.

Hobby Lobby, an Oklahoma City-based chain of arts and crafts stores in 42 states, is owned by the Green family, Evangelical Christians who object to paying for the morning-after and week-after pills, which they believe are tantamount to early abortion.

To defend Hobby Lobby, the Becket Fund will cite the free exercise clause of the First Amendment, which says Congress should “make no law respecting an establishment of religion or prohibiting the free exercise thereof.”

“Since he founded Hobby Lobby in 1972, David Green has made his faith an integral part of his business, “said Asma T. Uddin, legal counsel for the Becket Fund, in a phone interview.

Uddin said Green has conducted his business on Biblical principles, including closing on Sundays, paying starting salaries that are 80 percent above the minimum wage and playing Christian music in the stores.

While the Greens and other Evangelical Christian litigants are willing to pay for preventive contraceptives, Catholic owners are opposed to paying for all forms of contraception.

For the Grote family, which has been manufacturing vehicle safety devices in Madison Ind., for over a 100 years, the contraceptive mandate means choosing between their Catholic faith and making a living, said Bowman, lawyer for the Alliance Defending Freedom.

Like the Becket Fund, the Alliance Defending Freedom plans to emphasize religious liberty in its arguments in circuit courts of appeals on behalf of the owners of Grote Industries and five other small family businesses, who maintain that they would not be allowed to run their businesses in accordance with their religious teachings concerning contraception.

“Sanctity of life cases have always been a top priority since the alliance was founded in 1994 by a group of Christians, which included leaders of Campus Crusade for Christ and Focus on the Family,” said Bowman, who said his group has won 75 percent of its cases, including 39 victories in Supreme Court cases.

Like Grote Industries, which has 1,100 employees, most of the 30 litigants are small manufacturing, construction and health management firms that are owned by families in small towns and face crippling fines that could drive them out of business.

Bowman, a former clerk for several federal judges including Supreme Court Justice Samuel Alito Jr. at the U.S. Court of Appeals for the 3rd District, said the issue could wind up in the Supreme Court in early 2014.

“Although three courts of appeals have issued injunctions vindicating religious freedom over Obamacare, it seems likely that the Supreme Court will ultimately resolve the dispute,” he said. “Much depends on what happens in the federal appeals courts in the coming months.”

The alliance works with 300 legal allies, such as Americans United for Life, the Bioethics Defense Fund, which provides legal expertise on embryonic research, and the Federalist Society, an organization of conservatives and libertarians seeking reform of the American judicial system.

Besides challenging the contraception mandate, the Alliance Defending Freedom is active in other efforts to limit the impact of the Affordable Care Act, such as ensuring that Planned Parenthood won’t receive funds to care for women who will receive health insurance coverage under the expansion of Medicaid rolls by the states.

In April, the alliance filed a friend of the court brief with the U.S. Supreme Court on behalf of Americans for Tax Reform, which opposes all tax increases as a matter of principle, and the Susan B. Anthony List, a political action committee to fund anti-abortion women seeking election to Congress.

Would you like to Send Along a Link of This Story? https://womensenewsp.wpengine.com/story/in-the-courts/130508/veteran-pro-bono-lawyers-fight-health-care-law 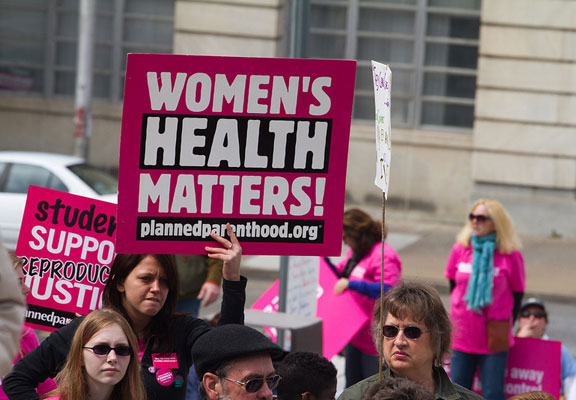