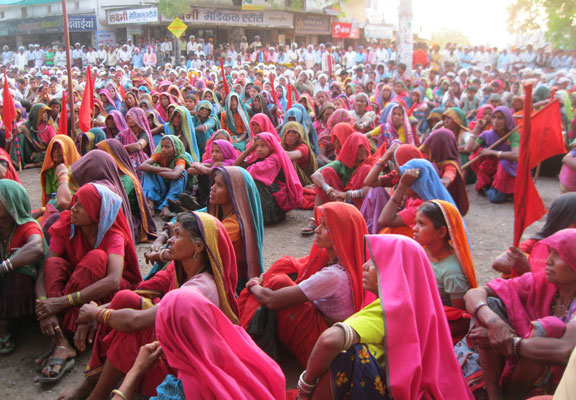 Tribal women in India are mobilizing behind a leading maternal-health advocate. Supporters say the case against Madhuri Krishnaswamy was concocted to stop her from flagging rights violations that led to 25 maternal deaths in nine months in one impoverished district.

NEW DELHI, India (WOMENSENEWS)–The May 30 release of Madhuri Krishnaswamy, a relentless campaigner for better maternal health for marginalized tribal women in Barwani, one of the most impoverished districts in the central Indian state of Madhya Pradesh, has brought temporary peace in the district.

Angry protestors who had been gathering in Barwani included about 2,000 tribal women from different parts of India, estimates Jagrit Adivasi Dalit Sangathan, the local advocacy group that Krishnaswamy heads.

Protesters converged on Barwani, ready to face arrest unless police charges against Krishnaswamy, based on the complaint by a Barwani health official, are withdrawn.

The May 16 jailing and arrest of Krishnaswamy on charges of — among things — obstructing a public official, have drawn outcry from rights groups and activists across the country. Demonstrators have been concentrated in Barwani, but some civil society groups have also met with senior health officials at the federal health ministry in Delhi to drum up support for Krishnaswamy.

More demonstrations, public rallies and litigation strategies to hold Madhya Pradesh government officials accountable for violations of women’s rights to life, health and non-discrimination are being pursued to pressure the administration to drop the charges.

The state government turned a blind eye to the health violations that Krishnaswamy was flagging and made up a false case to muzzle her, said Jashodhara Dasgupta of the National Alliance for Maternal Health and Human Rights, a coalition of 17 health advocacies, which has supported Krishnaswamy’s work.

Dasgupta, a member of the alliance, which is headquartered in New Delhi, told Women’s eNews that the arrest was meant to conceal the administration’s failure to implement various government programs for marginalized women.

The Barwani administration has not commented on the issue. The police filed a closure report in the case for lack of evidence in April. But after testimony by a Barwani health official the court summoned Krishnaswamy and sent her to prison after she refused to seek bail.

The false nature of the case was clear when some of the charges that led to her arrest included “rioting armed with deadly weapons,” said Ajay Lal, a program officer for Support for Advocacy and Training to Health Initiatives, a community health advocacy based in Pune, Maharashtra, that has been working with Krishnaswamy in Barwani.

“Krishnaswamy’s arrest is a blatant act of state reprisal against an activist who has repeatedly drawn attention to the health violations,” Lal said in a phone interview. Lal said poor maternal care in government hospitals was leading to deaths of poor tribal women.

Jagrit Adivasi Dalit Sangathan, the nongovernmental organization headed by Krishnaswamy, has staged persistent protests against the poor health services in the largely tribal area of Barwani for the past 14 years.

Supporters say Krishnaswamy’s arrest is linked to the 2008 case of Baniya Bai, a tribal woman living in Barwani district.

When the nine-month pregnant Baniya Bai reached the nearest government health center after travelling about nine miles by bullock cart from her village, a local health officer demanded a $2 bribe before allowing her to be attended. When family members couldn’t pay, she was dismissed from the center and wound up giving birth outside the facility, on the street, according to Krishnaswamy’s advocacy group.

Baniya Bai and her child survived.

Vypari Bai, a resident of another village in the same district, did not. Before dying she went through a terrifying 27 hours of labor pain as she was shunted by health officials from one government health facility to another in search of medical attention.

Krishnaswamy documented both cases in a court petition she filed in 2011 that flagged health-rights violations that led to 25 maternal deaths in Barwani government health facilities during a nine-month period of 2010.

“Tribal women are still dying from pregnancy-related causes because of official neglect and apathy,” said Harsing Jamre, chief program coordinator of Jagrit Adivasi Dalit Sangathan, in a phone interview. “Are the lives of tribal women less valuable? No action has been taken against such health officials. But our organization head (Krishnaswamy) raises her voice against this injustice, action is taken against her.”

According to the Human Rights Law Network, a Delhi-based collective of lawyers and social activists that investigated the Barwani maternal deaths, 21 of the 25 deaths from April to November 2010 in the district were women from the marginalized caste tribal group known as Scheduled Tribes, which are eligible for special benefits including free healthcare.

Krishnaswamy’s supporters say her cause and her own mistreatment show how government corruption, coupled with caste and gender discrimination are fatal for tribal women.

Disturbing correlations between social inequities and access to healthcare were identified in 2011 by health advocacies investigating maternal deaths and denial of health care in Barwani.

The report–by Sama, CommonHealth and Jan Swasthya Abhiyan — found that marginalized groups, in general, had trouble finding justice and tribal women were doubly disadvantaged by gender power hierarchy and caste.

Earlier this year, on Jan. 27, the Indore bench of the Madhya Pradesh High Court directed the state government to improve its healthcare manpower and infrastructure. The order stemmed from a public-interest suit filed by Krishnaswamy’s group and the Human Rights Law Network that documented maternal deaths of tribal women caused by negligence and denial of health care.

Activists working in Barwani say that better infrastructure and more clinicians must also be accompanied by a more humane attitude. Doctors rarely treat marginalized tribal women with empathy, they say, and long wait for service can be fatal for both the pregnant mother and child.

Would you like to Send Along a Link of This Story? https://womensenewsp.wpengine.com/story/reproductive-health/130530/indian-tribal-women-rush-champions-defense