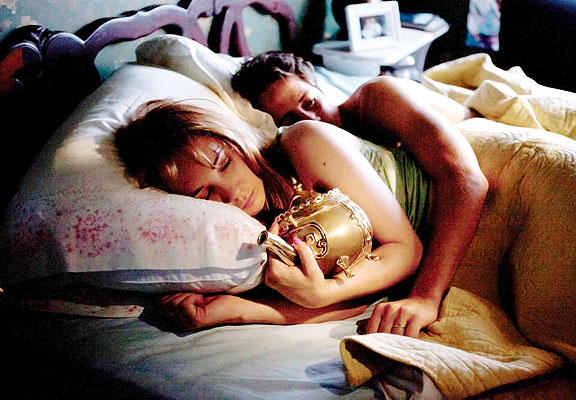 Other new releases this week include “Lotus Eaters” and the documentary “No Place on Earth.” Overall though, openings are thin this month, unless you’re a big fan of horror flicks.

(WOMENSENEWS)–The pickings are slim this month, unless you love horror. In that case, there are plenty of ghoulish girls and witchy women.

“The Brass Teapot” is Ramaa Mosley‘s first feature, a comedic thriller that raises serious considerations about relationships between people and their money. Alice (Juno Temple) and John (Michael Angarano), likeable and financially-challenged young couple, discover a magic teapot that spouts money whenever they hurt themselves. By intentionally inflicting physical pain on themselves –everything from stubbed toes to a bikini wax and dental work without anesthesia — they amass a bundle of cash and adopt a lavish lifestyle that they relish. They then discover that the teapot also rewards them when they hurt each other emotionally. With some quirky and not entirely convincing plot twists–involving the teapot’s former owners trying to reclaim it–the film tests the young couple’s commitment to each other and takes an entertaining satirical swipe at contemporary consumerist society.

“Lotus Eaters,” the first feature directed and co-written by Alexandra McGuinnes, is freewheeling foray into the world of privileged young swingers who spend their days shopping and lunching and their nights drinking chic cocktails and sleeping around. The title anoints these partygoers with character traits comparable to those of the narcotic-consuming race referred to in Greek mythology, by Lord Tennyson and James Joyce. This latest version, an ensemble of gorgeous people in exquisite clothing shot in stunning black and white at sumptuous locations in England, Ireland and France, makes this film visually thrilling. But the super cool-looking characters lack definition, depth and development. Ultimately, you leave the cinema wondering what it was all about and asking yourself “why should I care?”

“No Place on Earth,” a documentary directed by Janet Tobias, presents the very compelling story of a group of 38 Ukrainian Jews who hid in a cave for 511 days during World War II, thereby evading the Nazis and living to tell their extraordinary tale. Their story emerged in 1993, when American spelunker Chris Nicola discovered buttons, shoes and graffiti they’d left in the 73-mile long cave, and set out to find out who they were. The search led him to Esther Stermer, whose written memoir is the basis for this film. Augmenting on-camera interviews with Stermer and fellow survivors, Tobias relies on reenactments to recount events and create ambience. Unfortunately, this hybrid approach doesn’t do justice to the compelling subject’s true grit.

Three horror films round out the weekend’s women in film fare. “6 Souls” stars Julianne Moore as Cara Harding, a forensic psychiatrist treating a patient (Jonathan Rhys Meyers) whose multiple personalities all belong to people who were brutally murdered. The overly confident Harding is determined to cure him. No spoilers here. You’ll have to sit through the scares to see whether she succeeds, or succumbs.

“Thale” is a Norwegian horror flick that’s steeped in Nordic lore about singular people who during the hazy days of prehistory shunned human civilization to live among the beasts in the wild. In the film, a team of contemporary forensic cleaners come upon one–a female fatale, of course, mostly naked, and she has a tail. The low budget film is scary. So is the projected female image.

“Evil Dead” is a resurrection of Sam Raimi‘s 1981 horror classic. In it, five friends — including Mia (Jane Levy), who’s undergoing detox–spend a weekend in a cabin in the woods, where they find a “Book of the Dead,” and fall under its influence. The film’s a bloodbath and a devilish career leap for co-scripter Diablo Cody, who won a Best Writing Oscar in 2008 for “Juno.”

In “Simon Killer,” college grad Simon (Brady Corbet) heads to Paris to heal from a breakup and find new connections. He takes up with a hooker named Victoria (played by Mati Diop, who co-wrote the script), and soon reveals a startling proclivity for antisocial behavior. Although Victoria serves as the vehicle that lands Simon in a dark and dangerous place, the script isn’t misogynistic. This raw, edgy film is a gripping indie thriller.

Two unsettling horror films put female leads in jeopardy from ghoulish women. Horror icon Rob Zombie casts his wife, Sherrie Moon Zombie, as the lead in “The Lords of Salem.” Heidi, a Salem, Mass., radio DJ, receives a demo record from a group called The Lords. When she plays the disc, she comes under its spell, experiencing flashbacks to her hometown’s violently witchy past. Meanwhile, Judy Geeson, Dee Wallace and Patricia Quinn play three contemporary witches who add to Heidi’s nightmare and flesh out the film’s thin plot.

“Holla II,” a sequel, picks up the story of Holla six years later. Monica (Keily Williams), having escaped death at the hands of her deranged sister Veronica (Shelli Boone), has changed her appearance and moved to the South where, on the eve of her wedding at an antebellum plantation–a haunted one–she’s again endangered. The only way this franchise could be made more bloody aggressive (or aggressively bloody) would be to make Holla III in 3-D.

“The Reluctant Fundamentalist” is a timely dramatic thriller in which Changez (Riz Ahmed), aa Princeton-educated Pakistani man who’s living the American dream as a Wall Street financial wiz, is caught up in post 9/11 intrigue. Changez is the victim of racial profiling in the United States, while in Pakistan he’s berated by his impoverished poet father for having embraced Western values. He occupies a cultural no man’s land, a place rife with emotional conflict and challenging politics. His neurotic main squeeze (Kate Hudson) further destabilizes his life. Based on Moshin Hamid‘s novel, co-scripted by Ami Boghani and deftly directed by Mira Nair, the film keeps tension taught while creating empathy for the anguished and angry Changez as he struggles to escape the intrigue.

“One Night Stand,” directed by Elisabeth Sperling and Trish Dalton, documents a group of well-known actors, directors, composers and choreographers who get together for a 24 hour period to think up and produce a series of four 20-minute musicals. The mini-musicals are performed only once, at a charity event staged to fund workshops of full-length musical theater productions. With Richard Kind, Rachel Dratch, Cheyenne Jackson and other popular stars in the ensemble, this documentary is very entertaining, and all for a good cause.

In “Arthur Newman,” screenwriter Becky Johnston takes the title character (played by Colin Firth) on an existential journey. He fakes his own death in order to escape from his mediocre life and start anew–as a golf pro. Hardly realistic, he hooks up with Mike (Emily Blunt) and embarks on a journey of self-discovery that involves a lot of self-deception and escape.

“At Any Price,” co-scripted by Hallie Elizabeth Newton, presents a compelling family drama with strong sociopolitical underpinnings. Dennis Quaid stars as a Midwesterner who’s intent on keeping his family farm viable and in the family. He’s challenged by corporate farming, genetically engineered crops and a son (Zac Efron) who wants to be a race car driver. Rahmin Bahrani directs a fine film with impact that’s greater than the sum of its parts. 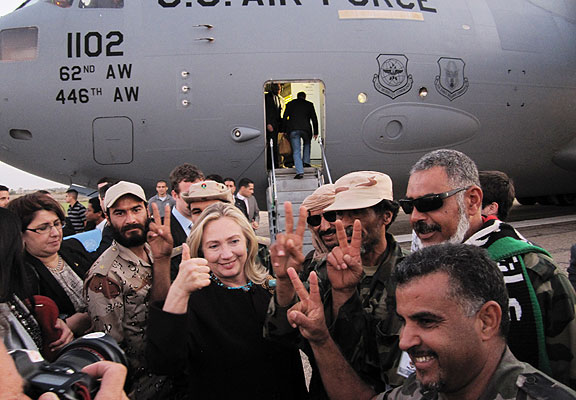