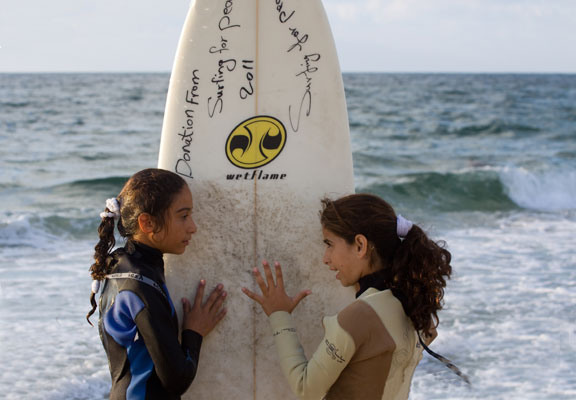 Sisters Sabah and Shrouq Abu Gunaim are trying to carry their childhood passion for surfing into adolescence. The sport is a rarity in the Gaza Strip, and almost forbidden for young women in this conservative society.

(WOMENSENEWS)–Two Palestinian sisters, Sabah and Shrouq Abu Gunaim, are struggling to hang on to their identities as active surfers despite cultural opposition to body-baring sports for girls and women.

When they were little girls they could surf with relative freedom. But now that they are teens, it’s different.

“My family encourages me, although the community thinks it’s shameful to do so,” says Sabah, age 14, as her mother braids her long ponytail.

For her older sister Shrouq, 17, the pressure is now particularly intense.

The Abu Gunaim family lives in a modest, thatched-roof house just across the street from the beach, in the windswept spot of Sheikh Ejleen.

For a while Sabah, as a younger girl, surfed openly on the beach. But now she avoids broad daylight. “Once I got older and became more of a woman, as they say, I had to surf when no one is looking, in the early morning and sometimes late at night,” she says.

Both sisters are careful not to go out alone anymore.

“I always surf with my father and brothers around now,” says Sabah. “I enjoy it; but not as much. But do I have any other choice?”

If their father is nearby, men on the beach are less likely to harass and scold them for flouting constraints on girls’ sports. But sometimes even if their father is there, a male passerby will threaten and harass him to get his daughters out of the water.

Still, Sabah remains committed to the sport. “The community might say it is ‘aib,’ a disgrace, for a girl to surf, but it doesn’t feel this way. I want to go to the Olympics with Shrouq and prove them wrong.”

Their mother, a 35-year-old full-time homemaker who asked not to be named, worries that surfing could hurt her daughters’ chances at marriage.

“My daughters can’t draw attention to themselves anymore,” she says. “It will hurt them and ruin their small dreams. I only hope they don’t get hurt; it’s what they love to do and that’s all I care about.”

The sisters’ surf boards–one black and white and one blue–have been featured in a number of stories in the foreign press in recent years. But here at home the attention is beginning to work against them in a community where young women are expected to stay largely inside and wear modest attire.

Whether they will be knocked off balance by waves of public disapproval is a question as they are getting older.

The girls’ father, Rajab Abu Gunaim, helped pioneer the sport in the Gaza Strip and passed on his passion to his two daughters, the oldest of six children. Sabah and Shrouq in turn taught their younger brothers.

“I consider myself a self-taught surfer, a lucky one,” says Rajab Abu Gunaim “What I have learnt represents my heritage, one that I’m working on passing on to my children, both boys and girls.”

When the novelty of two surfing sisters in the Gaza Strip began to attract the media, their father worried the exposure might bring negative attention. At the same time, however, he thought it could also work to foster their talent and help the local community adjust to the idea of female surfing.

The sisters are breaking no laws in surfing, but girls and women are by custom expected to be accompanied by a male in public, to dress in modest attire and to exercise and participate in sports indoors. Outdoor sports, with body-revealing attire, are borderline taboo.

Rajab Abu Gunaim works as a full-time life guard during the summer and as a fisherman throughout the year. Much of his surfing skills, he says, came from watching the sport on TV. He learned how to swim at age 8 and at 17 began training others to surf.

Now about a dozen male surfers–ranging from 14 to 35 in age–are a common feature on the beach, all of them trained by him.

His daughters ride on boards donated by a cross-border cooperation organization, Surfing 4 Peace, which encourages surfers in Gaza and Israel.

Gazans’ use of the sea was limited to three nautical miles after the 2008-2009 war imposed a blockade that has made fishing and sailing nearly impossible. Israel says the blockade is necessary to stop the infiltration of militants into Israel and arms importation to Gaza.

Rajab Abu Gunaim, who says he has come under fire many times while fishing, condemns the blockade as a form of “collective punishment” that has hurt his livelihood and blocked the import of surf boards to the Gaza Strip.

“No surf boards are allowed to come in and of course none of us are allowed to get to the boarders to bring them in. It is hopeless. Although surfing is a joyful and challenging sport all over the world, apparently in Gaza it threatens Israeli security,” he fumed.

Sabah recounts the astonishment of her classmates the first time they saw her surf. “I once came back from school with some of my classmates and they saw my board. I tried to explain to them about surfing and my dad took us all on his boat into the sea. I dived into the water and when I looked back, they were all astonished.”