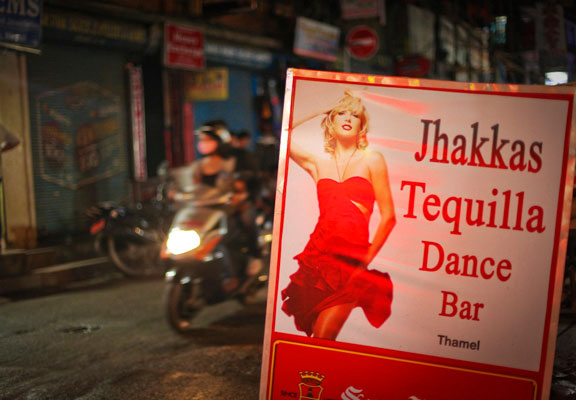 Thousands of young women each year are lured into Kathmandu’s booming and unregulated sex industry that operates out of cafes and bars. Many arrive with hopes of saving money and going home, but the wages are often too meager for that to ever happen.

Her job is to gyrate to Indian film songs in a tame version of a pole dance. “I am paid to flirt with the customer, to entertain him and encourage him to order more food and drinks,” she said. If she can boost sales she keeps the job. Otherwise, she will be replaced. “After all, there are so many young girls who come to Kathmandu looking for any job.”

As the night rolls on, the songs become raunchier, lights dimmer, clothing scantier and the groping and touching more intense. This is how Sunita sums up the dark side of Thamel.

Clients are of all age groups, some as old as 60.

She came to the capital looking for a way out of poverty and violence in her village. A friend of a friend promised a job waiting tables during the day. “This is how it always begins and you reach a point of no return.”

Now Sunita works seven days a week, from 6 p.m. to midnight. Her salary is 6000 Nepali rupees, or $70 a month, and she gets about $20 in tips. She once hoped to save enough to return to her village. She hasn’t and may never.

Each year thousands of young women come to Kathmandu in search of financial independence and get trapped in brothels and the unregulated sex tourism industry.

Anti-trafficking activists in Nepal say Thamel is the epicenter of the entertainment industry in Kathmandu, where there are different sorts of cabin restaurants partitioned into tiny cubicles, disco restaurants, duet restaurants that offer live performance of traditional Dohori folk music (involving a debate of witty poetry) and massage parlors. A boom in sex tourism in turn has led to an increase in internal trafficking, activists say.

Commercial sexual exploitation and trafficking, both transnationally and domestically, have been rising, finds the 2012 U.S. Department of State‘s Trafficking in Persons Report. It says traffickers bribe political leaders, businesses, government officials, local police and custom and border patrol for protection. The Country Reports on Human Rights Practices for 2011 by the U.S. State Department says between one-fourth and one-third of the workers in sex tourism are children under the age of 18.

“Most of the time, the agents go to a village, they say to the girls, ‘You have so many problems here; don’t stay here.’ They promise jobs in Kathmandu. Sometimes the agents are local women or people familiar to the girls. ‘Don’t stay here. Come. You can get this and that.’ They sell them dreams and fantasies.”

Data Source: Trafficking in Persons especially on women and children in Nepal, published in 2011. Page: v

So begins a crafty grooming process. Pradhan said a girl often undergoes a multi-step training period before she is thrown into the market.

“For a few weeks, she is exposed to a different life, she gets a mobile phone, shoes, fake ornaments, and for a village girl it is a dream. No work,” he said. But gradually they are introduced to sex, followed by beer and substance abuse.

Activists in Nepal are alarmed at the increase in the number of such establishments but they are not advocating a complete shutdown.

Sulakshana Rana, program coordinator at Saathi, a nonprofit based in Kathmandu, said they are working to turn these establishments into more respectable and safe workplaces. “If you close these establishments there is a likelihood that these girls will go into street based prostitution, which is more difficult to control.”

Rana said it also decreases the income of the girls. “Here there is bargaining power and they know the client. Where would these girls go? We should not have allowed these places to mushroom at such an alarming rate,” she said.

Bijoyeta Das is a multimedia journalist; currently based in South Asia. Her work is available at http://www.bijoyetadas.com

Would you like to Send Along a Link of This Story? https://womensenewsp.wpengine.com/story/prostitution-and-trafficking/130208/nepals-sex-industry-boom-lures-young-jobseekers 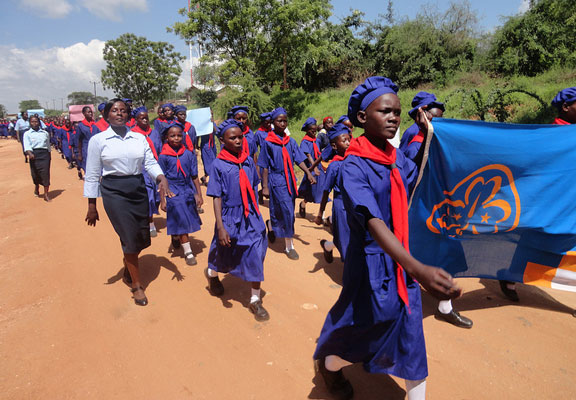