Mitt Romney is now tied with President Obama among women likely to vote in the upcoming election. His wife, Ann Romney, is campaigning heavily on his behalf to attract more of these voters, while female celebrities fight back.

With 22 days left until the election, a USA TODAY/Gallup Poll released Monday found that Mitt Romney, who leads President Barack Obama by 5 percentage points among likely voters in the nation’s top battleground states, has also growing enthusiasm among women.

The survey of voters in 12 crucial swing states found female voters much more engaged in the election and increasingly concerned about the deficit and debt issues that favor Romney. The Republican nominee now ties the president among women who are likely voters, 48 percent-48 percent, while he leads by 12 points among men.
In the meantime, his wife, Ann Romney, reached out to female voters Monday in central Pennsylvania, one the 12 swing states, to persuade them to support her husband, Philly.com reported Oct. 16. ”My message is this for women: Do you want a brighter economic future? If you do, vote for Mitt,” she said to cheers from an enthusiastic crowd of about 900 people, most of them women, gathered in Leffler Chapel at Elizabethtown College.
Ann Romney, who focused her speech on economic policy, told the audience that women have suffered most in the recession. ”The voices of women are saying to me, ‘Please help me,'” she said. “Women have been hit harder than men. There are more women unemployed and more slipping into poverty.”
She will continue to campaign on behalf of her husband by making an appearance ABC’s “The View” on Thursday, ABC reported Oct. 15. Ann Romney will be meeting the show’s hosts without her husband, who declined the invitation over the weekend. Co-host Barbara Walters left the door open for Mitt Romney to “change his mind,” adding that it would “be our pleasure to have him on the show,” one that he once referred to as “high risk.”
Meanwhile, female celebrities who support Obama are starring in a new ad that highlights Mitt Romney’s positions on women’s health issues, The Huffington Post reported Oct. 15. Actresses Eva Longoria, Scarlett Johansson and Kerry Washington criticize the Republican Party’s stance on health care, abortion and birth control. They also highlight the GOP camp for pushing legislation to “redefine” rape and force women to undergo transvaginal ultrasounds. The ad, released by MoveOn.org Political Action, is produced and directed Rob Reiner and his wife, Michele Reiner.
The spot comes a week after Mitt Romney took a softer position toward abortion, stating in an interview that as president he would not push for anti-abortion legislation.
BIO: Hajer Naili is a New York-based writer for Women’s eNews. She has worked for several radio stations and publications in France and North Africa and specializes in Middle East and North Africa. 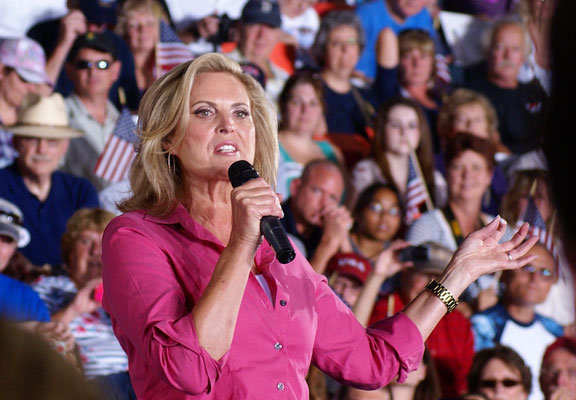 Ann Romney: Contraception IS About the Economy