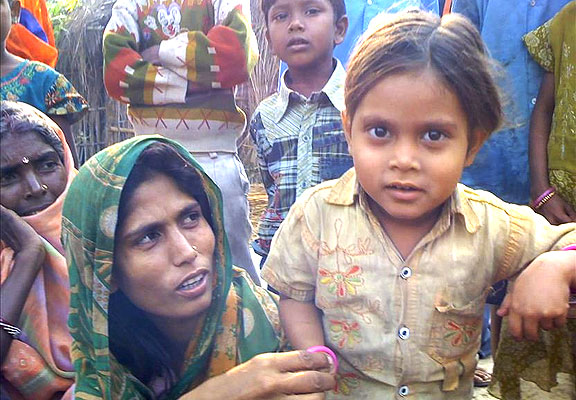 A requirement that participants have no more than two living children excludes numerous women in high-fertility regions in India who could most benefit from the $80 outlay.

NEW DELHI (WOMENSENEWS): At 28, Leela Devi, who lives in a small village in the impoverished northern state of Uttar Pradesh, seems like an obvious candidate for a new government program to improve the health of pregnant and lactating women.

Devi is weak and finds herself constantly tired. She has given birth seven times. Two of her children died soon after birth. The struggle to feed her surviving children meant that Devi, a daily wage laborer, had to return to work before she had adequately recovered from childbirth and pregnancy.

National health surveys have shown that high levels of under-nutrition and anemia in adolescents and women are exacerbated by early marriage, early childbearing and inadequate spacing between births.

Data show that more than half of women in India (55 percent) are anemic, with 63 percent of lactating women and 59 percent of pregnant women suffering from the condition.

But Devi and a huge portion of other low-income women will not be eligible for a new government health program that provides cash assistance of $80 because they have had too many children.

The Indira Gandhi Maternity Support Scheme is only open to pregnant women who are over 18 years of age and don’t have more than two living children. One 2011 study, however, based on the latest national family health survey, indicated as many as 63 percent of poor women between ages 15 to 49 would be disqualified from the program because they had more than two children.

The benefit requires a pregnant woman to register her pregnancy at a health center, accept immunization of the mother and child and agree to exclusive breastfeeding and growth monitoring of children.

With the scheme being piloted in four states, Uttar Pradesh, West Bengal, Jharkhand and Odisha–all high fertility states–health activists contend the government is promoting a coercive two- child policy in the name of population stabilization by offering incentives for only those women who have two children.

The National Alliance for Maternal Health and Human Rights, a group of 17 nongovernmental organizations working on gender and health, conducted a study of the maternal health program and found that designers of the program visualized the eligibility conditions as encouraging a "small family norm."

The group, which monitored the maternity scheme from an equity and accountability perspective, found that this approach ignored how maternity was embedded within the vicious cycles of poverty, ill health and impoverishment for rural and marginalized women.

Health activists say that by imposing the exclusion criteria that denies this benefit to women with more than two children, the scheme fails to address the fact that women have no control over their bodies and have little or no access to contraception. The women excluded by the eligibility criterion most need the cash benefit because they have such limited access to health and family planning services and have little choice about bearing children and birth control.

The eligibility criterion, in short, defeated its stated purpose of improving pregnant women’s access to income, food and rest, said Kalyani Meena of Prerana Bharti, one of the alliance’s partner nongovernmental organizations that conducted the study in the state of Jharkhand.

All 57 women studied by the national alliance in the four states, during the period of December 2011 to March 2012, had gone through three to seven pregnancies. They all had a high rate of pregnancy failures due to malnutrition and poor availability of health care.

Given the lack of regulations and income insecurities in the informal sector, women in these regions are often forced to go back to work soon after childbirth and can neither practice exclusive breastfeeding nor provide sufficient care since they work under difficult conditions in places without child care services.

In Uttar Pradesh, the most populous state in India with a population of over 200 million and where Devi lives, the average number of children born to a woman during her reproductive years is 3.6; it’s 3.9 for rural women.

Even if women wanted to limit their family size, the high cost of accessing health care stops many of them. The study found that almost all women who go to health care facilities suffer daily wage losses because of long waiting hours at the public hospital. Those losses are doubled if they are accompanied by their husbands.

Skipping work to rest during pregnancy and post-pregnancy means losing wages for two-to-18 months, which adds up to financial losses of between $16 and $220, according to the study.

Most of the women studied said they had taken loans to cover survival costs and then cut back on food or returned to work early to pay off the loans.

The government’s cash benefit of $80 would obviously be helpful to such women.

The report’s investigators conclude that if India’s high maternal mortality rate (212 deaths for 100,000 live births) is to be lowered, along with high rates of anemia and under-nutrition, then maternity benefits must be unconditional and food and health coverage universal. Hoping their findings would feed into the evaluation of the scheme, the report also recommends that women’s advocates be involved in monitoring and evaluating the program and in engaging community women in social audits to ensure gender concerns are addressed.

Swapna Majumdar is a journalist based in New Delhi and writes on gender, development and politics.

Would you like to Send Along a Link of This Story?
https://womensenewsp.wpengine.com/story/reproductive-health/121022/indian-maternal-health-program-blasted-critics

Pandering to Female Voters of Yesteryear